My wanderlust has been intense lately. The urge to hop on a plane and explore far-away places has constantly been bouncing around my brain. Don’t care the destination just want to GO!

Ohio is the destination I take most for granted. Here I am in the heart of it all, In a state that has so much to explore without ever having to get on a plane. From Columbus any Ohio location is within a three mile drive, and there are countless must-see treasures from Bridges, theme parks, Metro Parks, malls and so much more.

Butler County, tucked between Dayton and Cincinnati in the South-West corner of Ohio offered up more fun than we could {almost} handle in one weekend!

Are you ready for the most delicious adventure of your life? Backed by 236 years of donut making experience, the ten mom-and-pop shops of Butler County know donut making. Each morning they line bakery cases full of fresh and imaginative confections. From recipes that have been passed down for generations to unique flavors envisioned by a baker working in the middle of the night, you’ll find the donuts of your dreams on the Butler County Donut Trail! 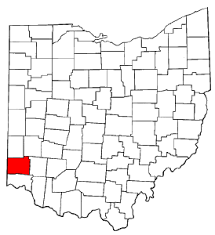 Boasting one of the highest numbers of donut shops per capita in the Midwest, the Butler County Donut Trail was launched in January 2016, and highlights 10 locally-owned, mom-and-pop donut shops. It is the first donut-centric trail in the country! I’ve heard of coffee trails, beer crawls but never a trail full of glaze and sprinkles! 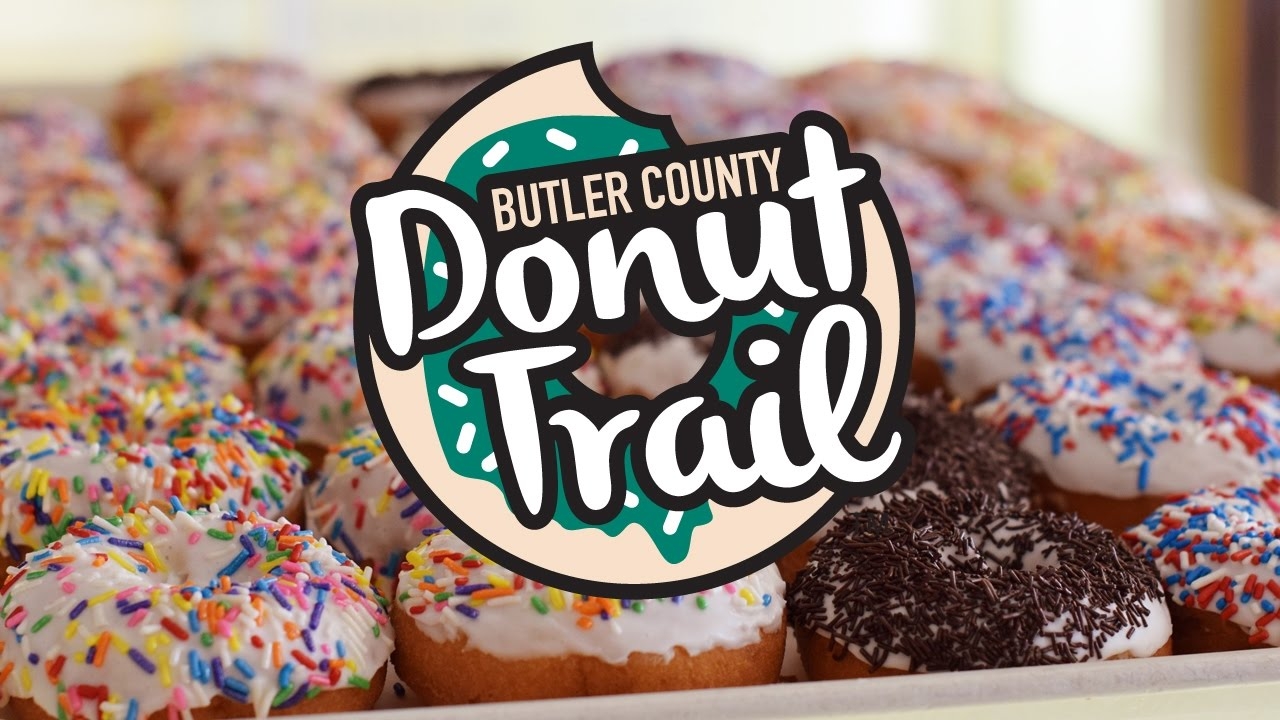 Trail participants can experience the Donut Trail by collecting stamps and filling in an official passport at each required location. Passports can be picked up in any donut shop or printed online. 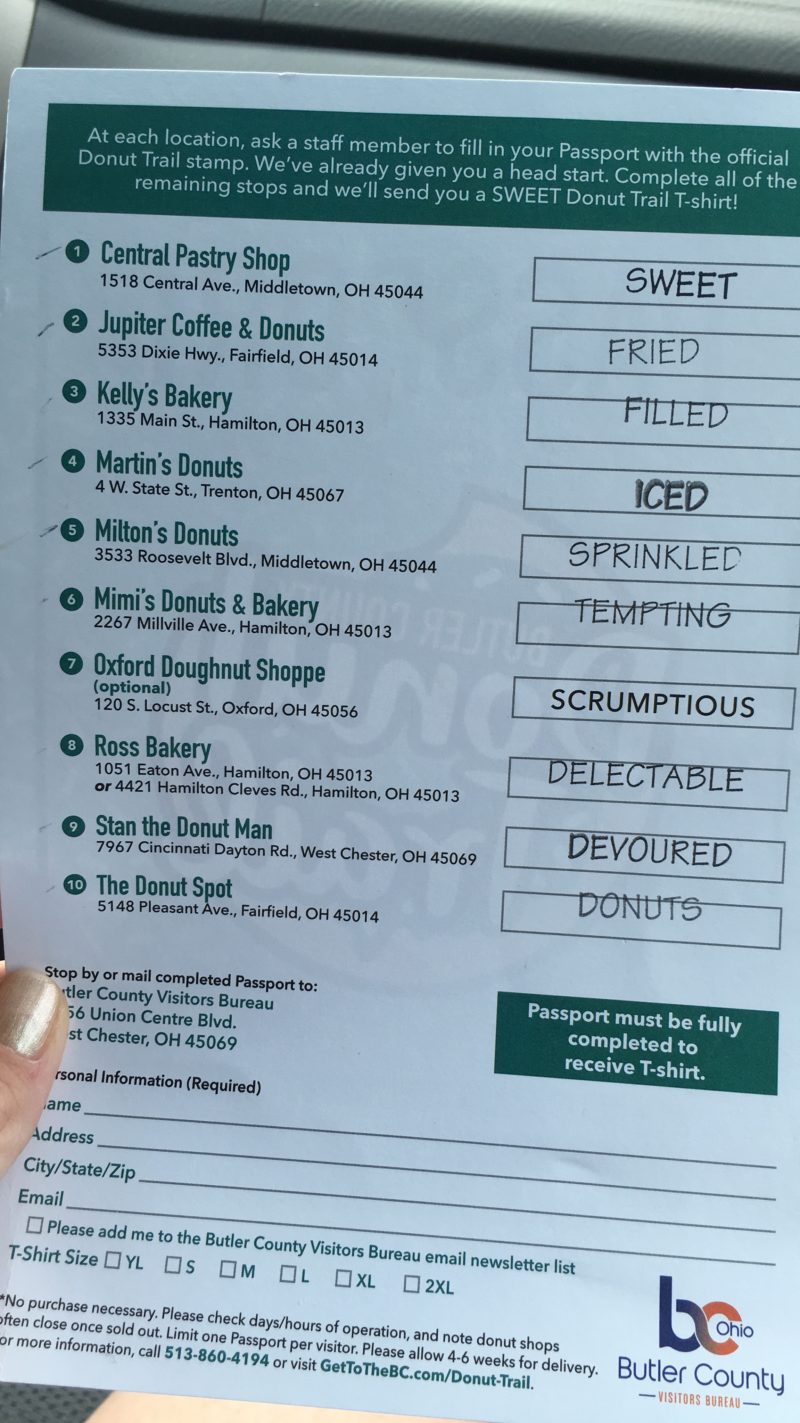 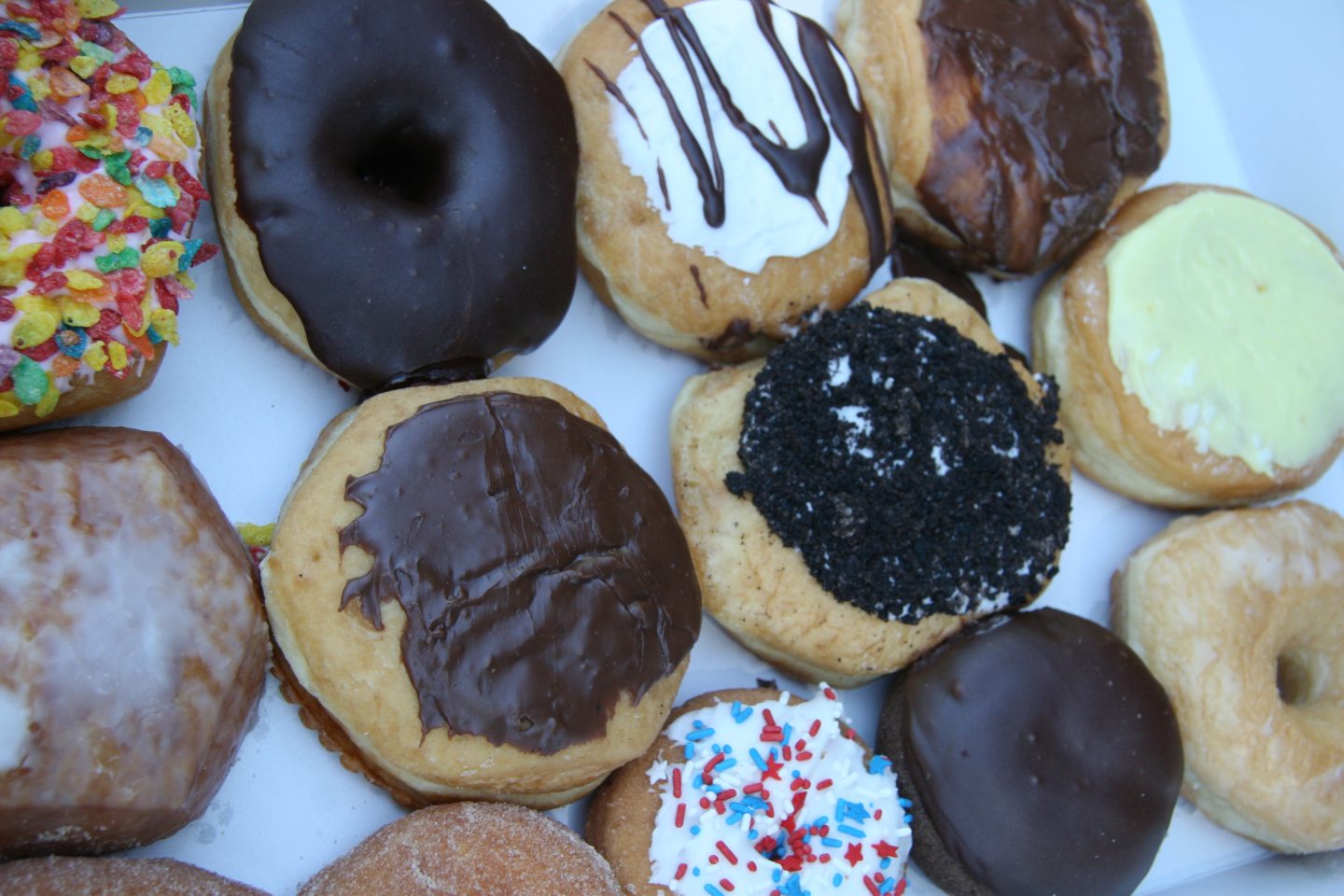 The Donut Trail spans 80 miles and takes approximately 3.5 hours to complete. The participating businesses have a combined 307 years of donut-making experience. 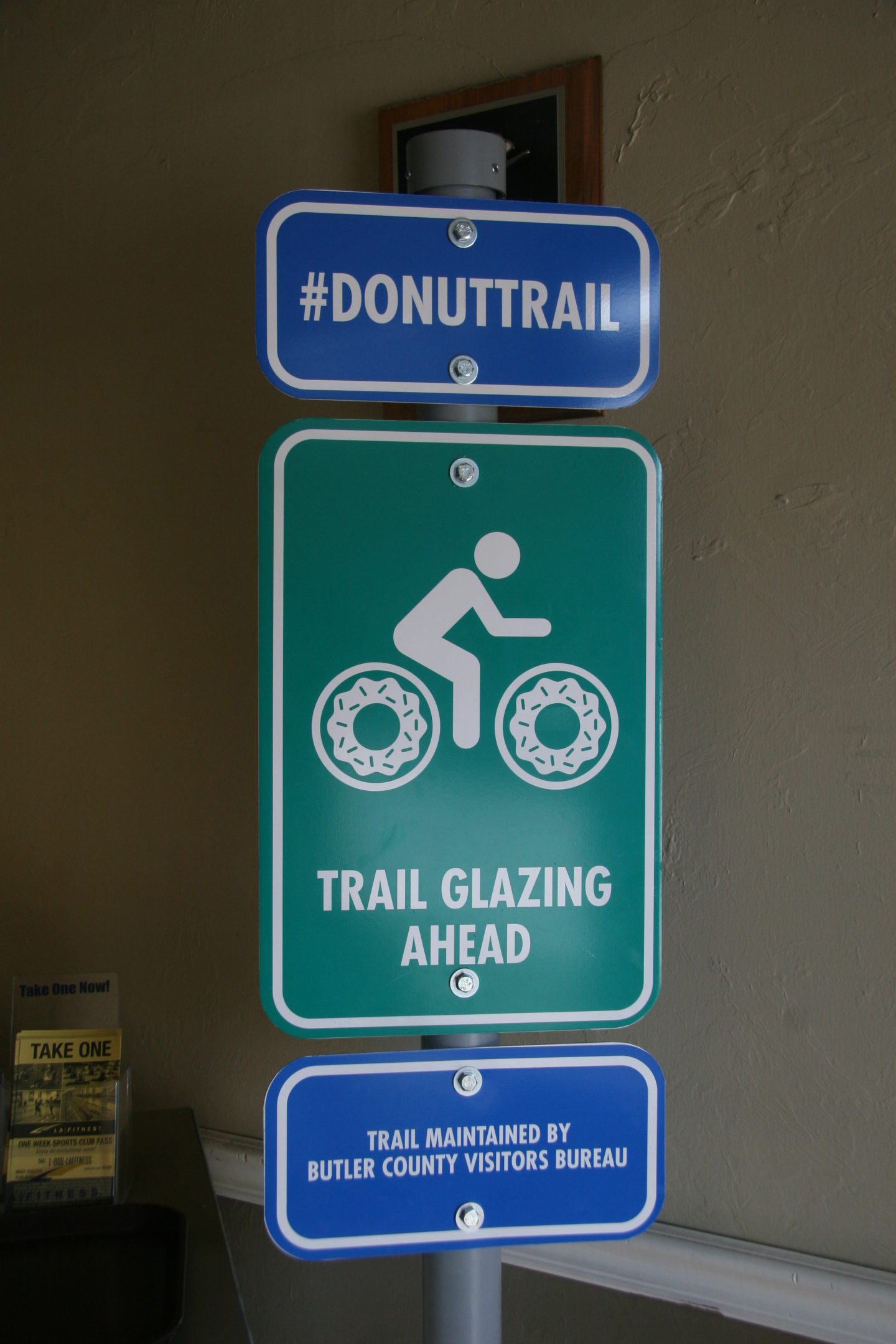 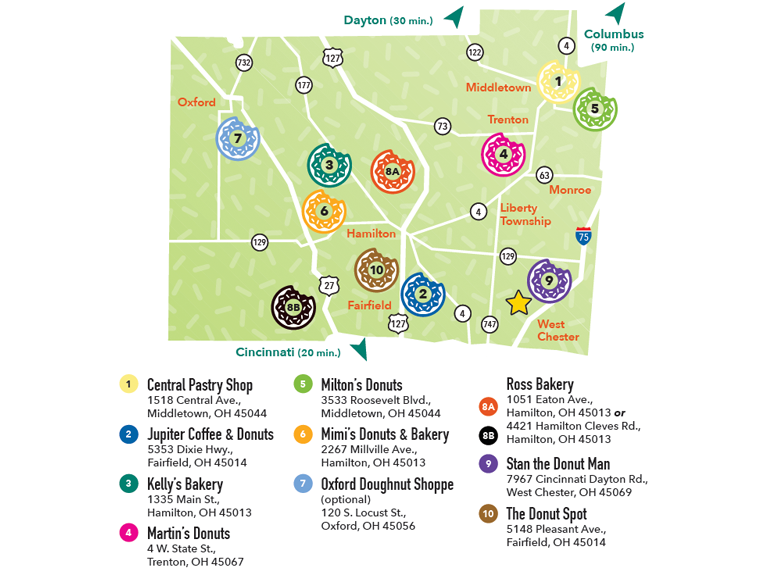 Each donut shop has unique donut offerings that makes their establishment stand out. Some of these unique flavors include pineapple fritters, s’mores, tier tails, raspberry cheesecake and Reese’s cup. 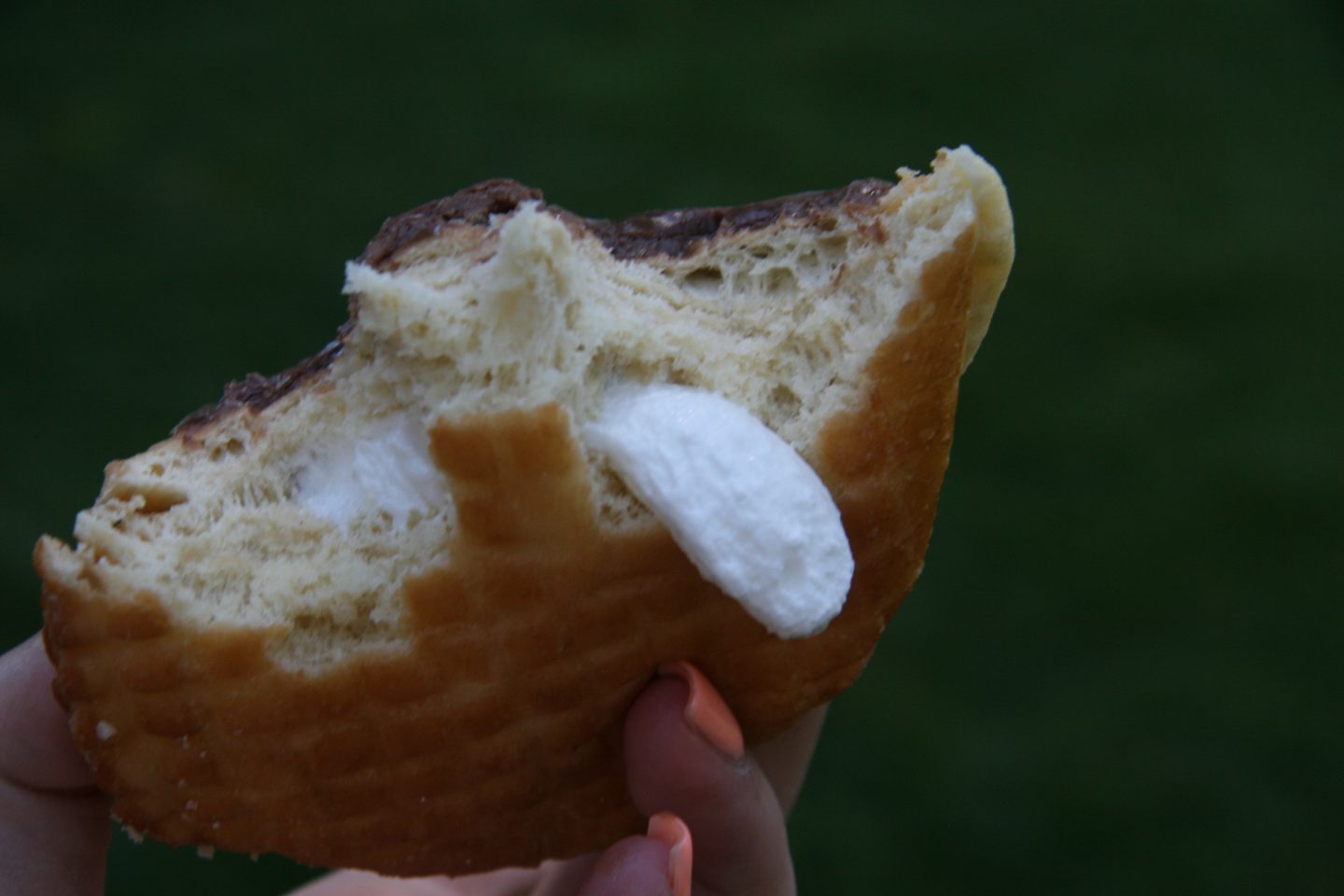 To date over 5,900 people have visited the trail, including visitors from seven countries and 40 states (including Alaska and Hawaii.) 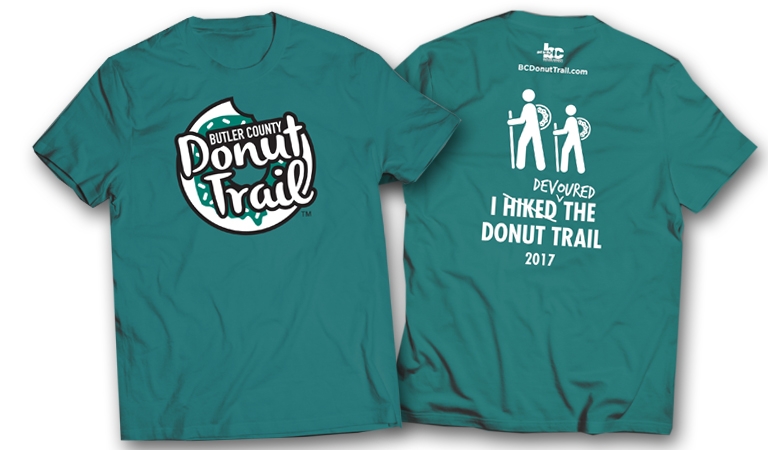 Once you complete the Donut Trail, each passport can be redeemed for a complimentary Donut Trail t-shirt! In case you really like donuts and want to complete the trail more than once, the t-shirt design changes annually. 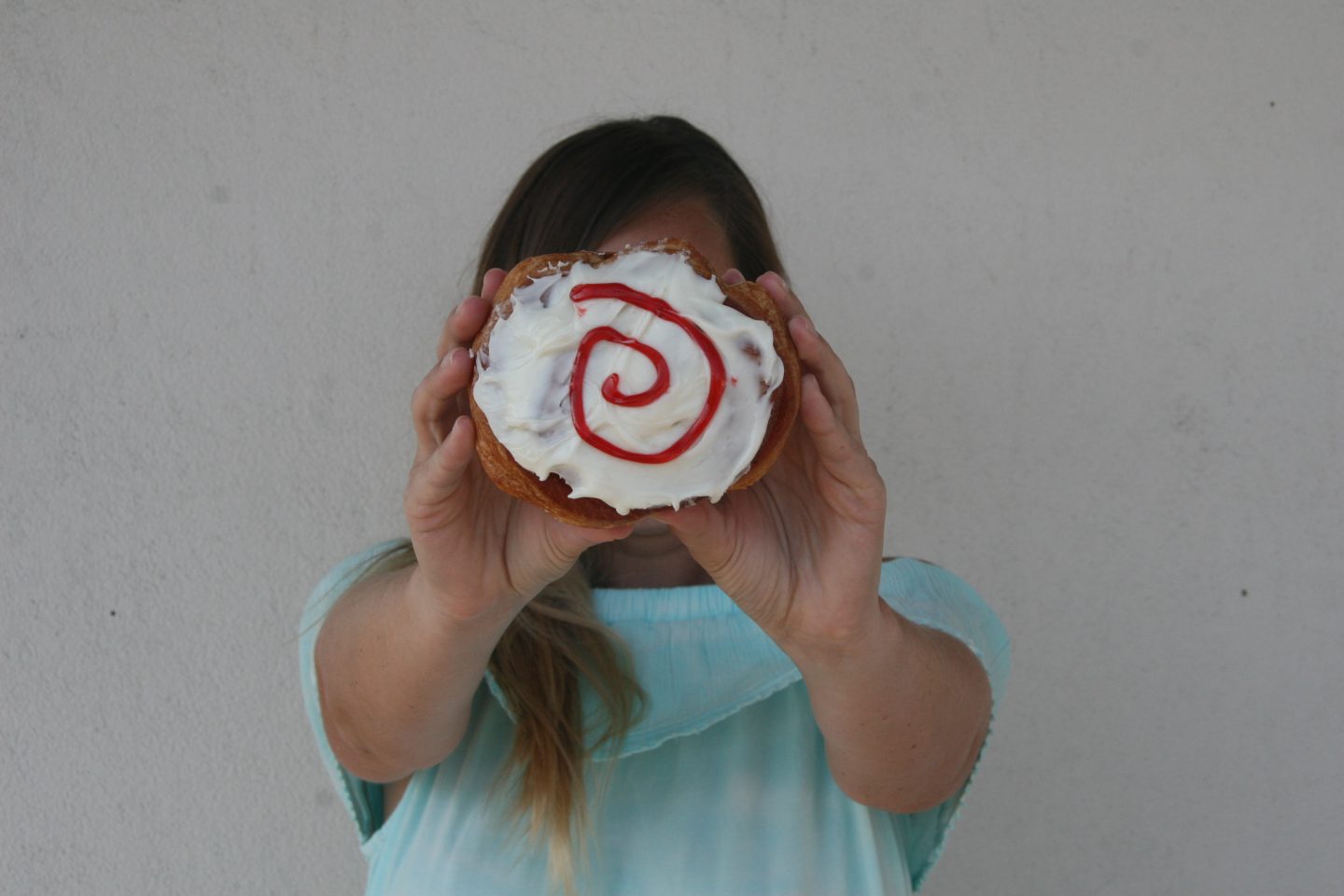 I’ve literally never seen so many donuts the size of my head! 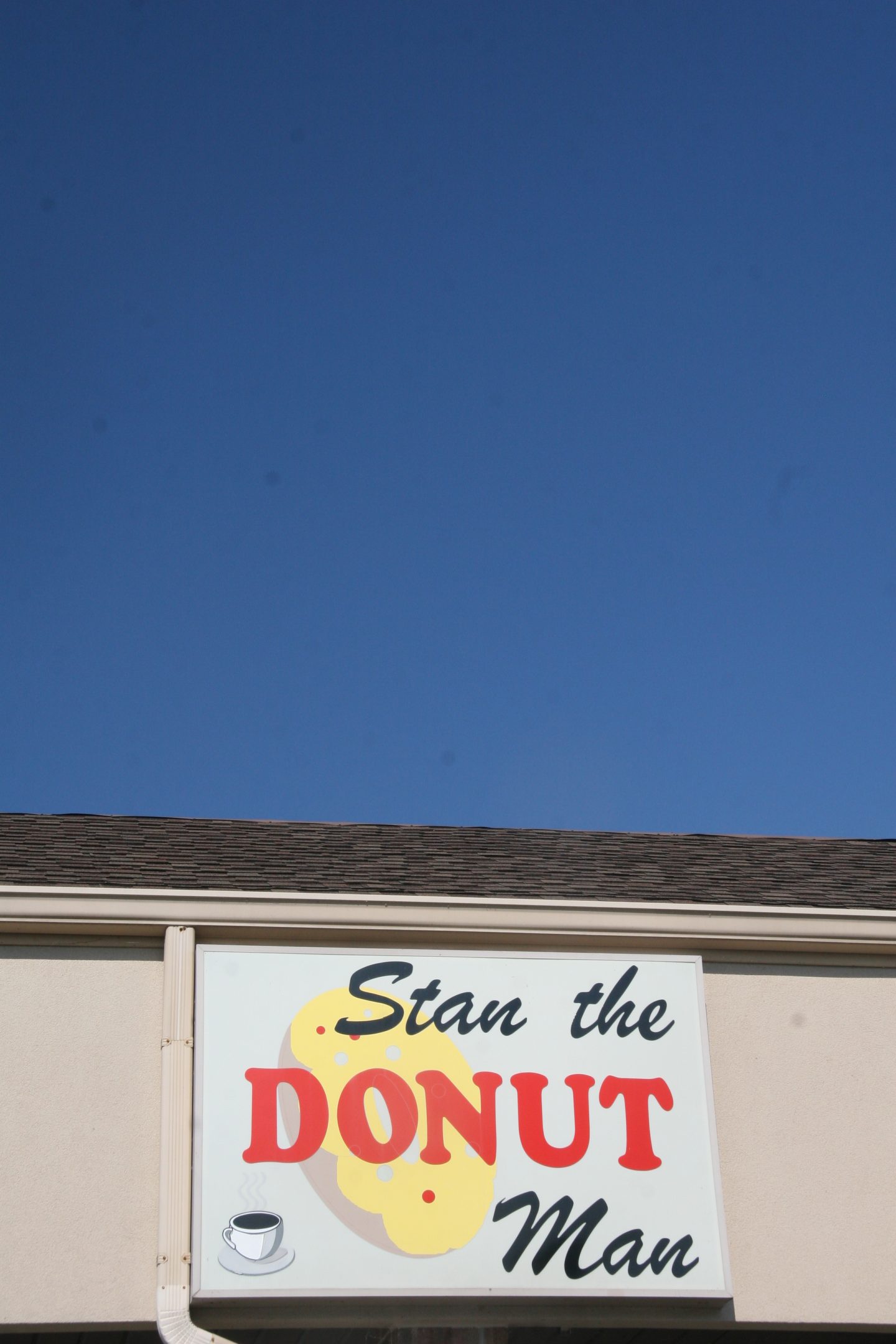 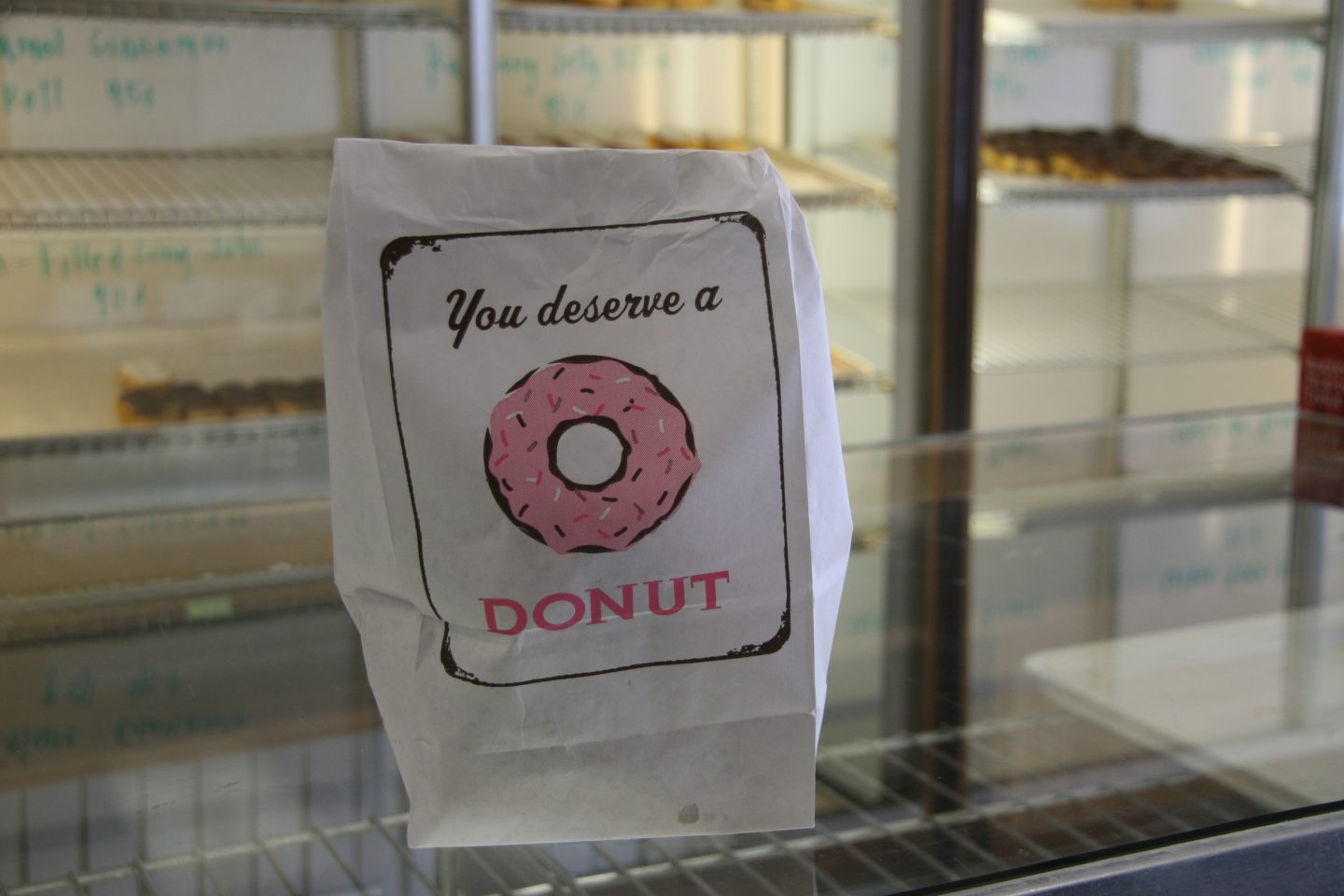 Pineapple Fritters, Davey Crockets and tiger tails are some of the beloved fried favorites found at this stop. 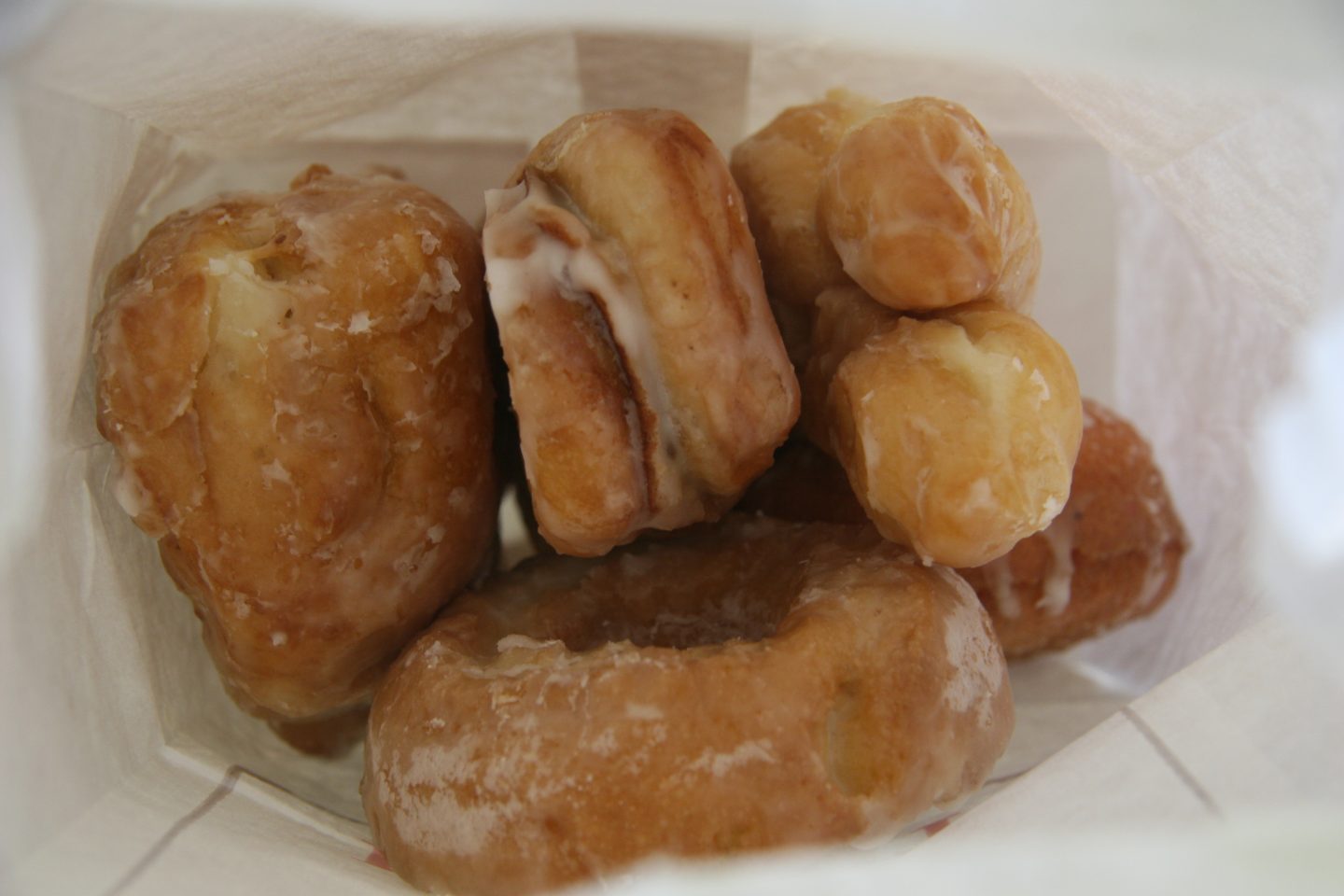 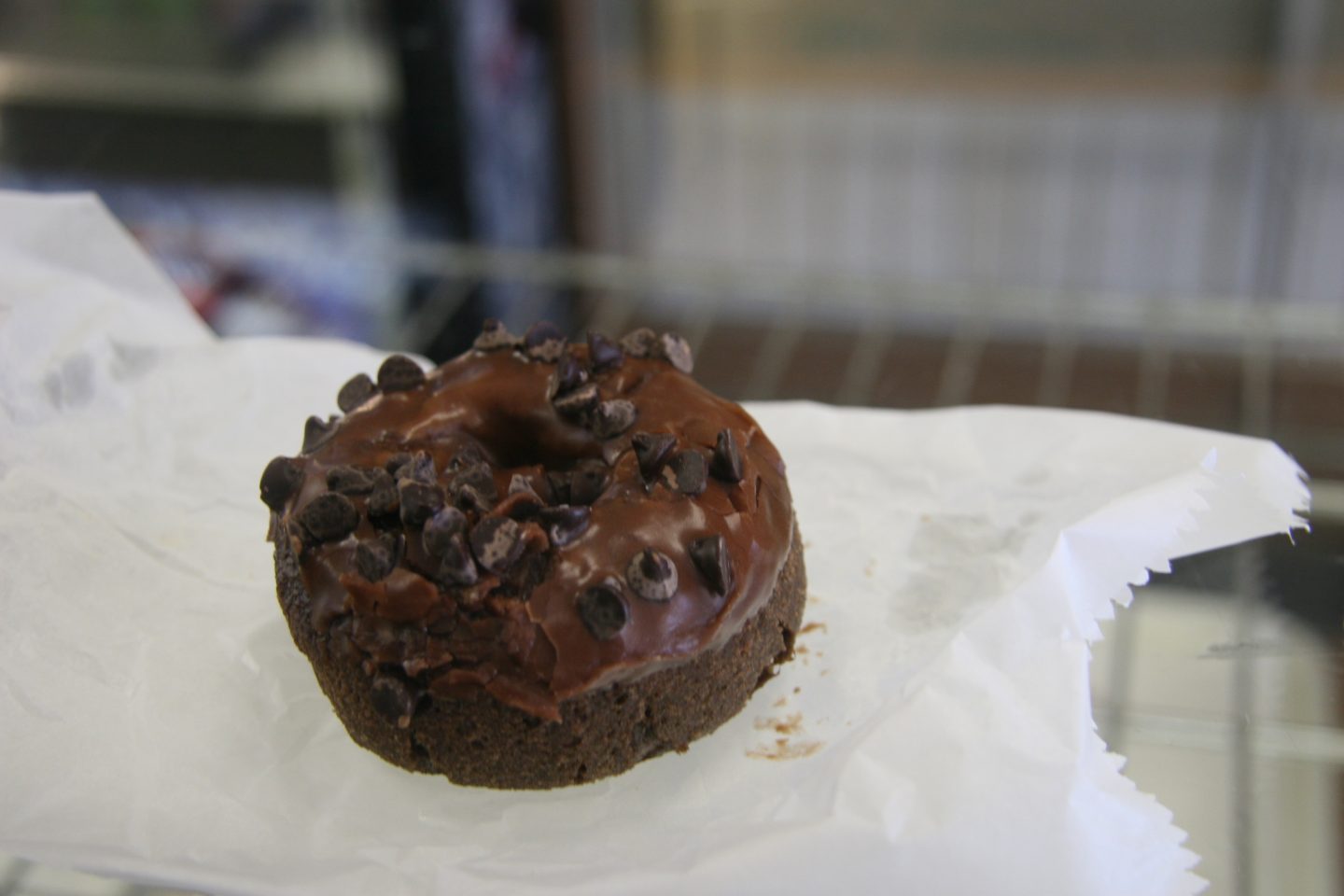 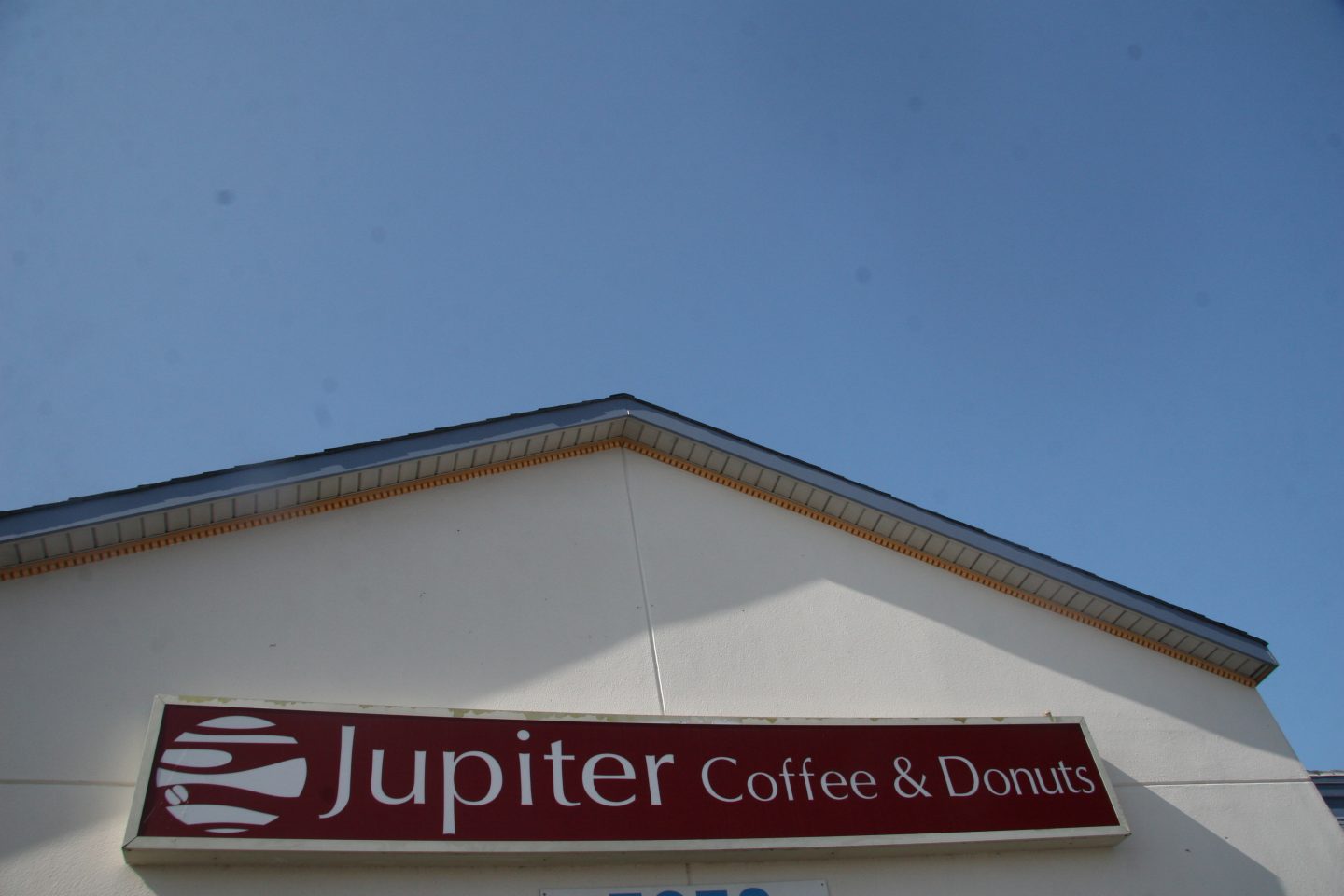 The donuts and coffee were out of this world! Order an Ohio maple syrup donut, cake donut of the month or waffle donut, paired with fresh, house roasted coffee. 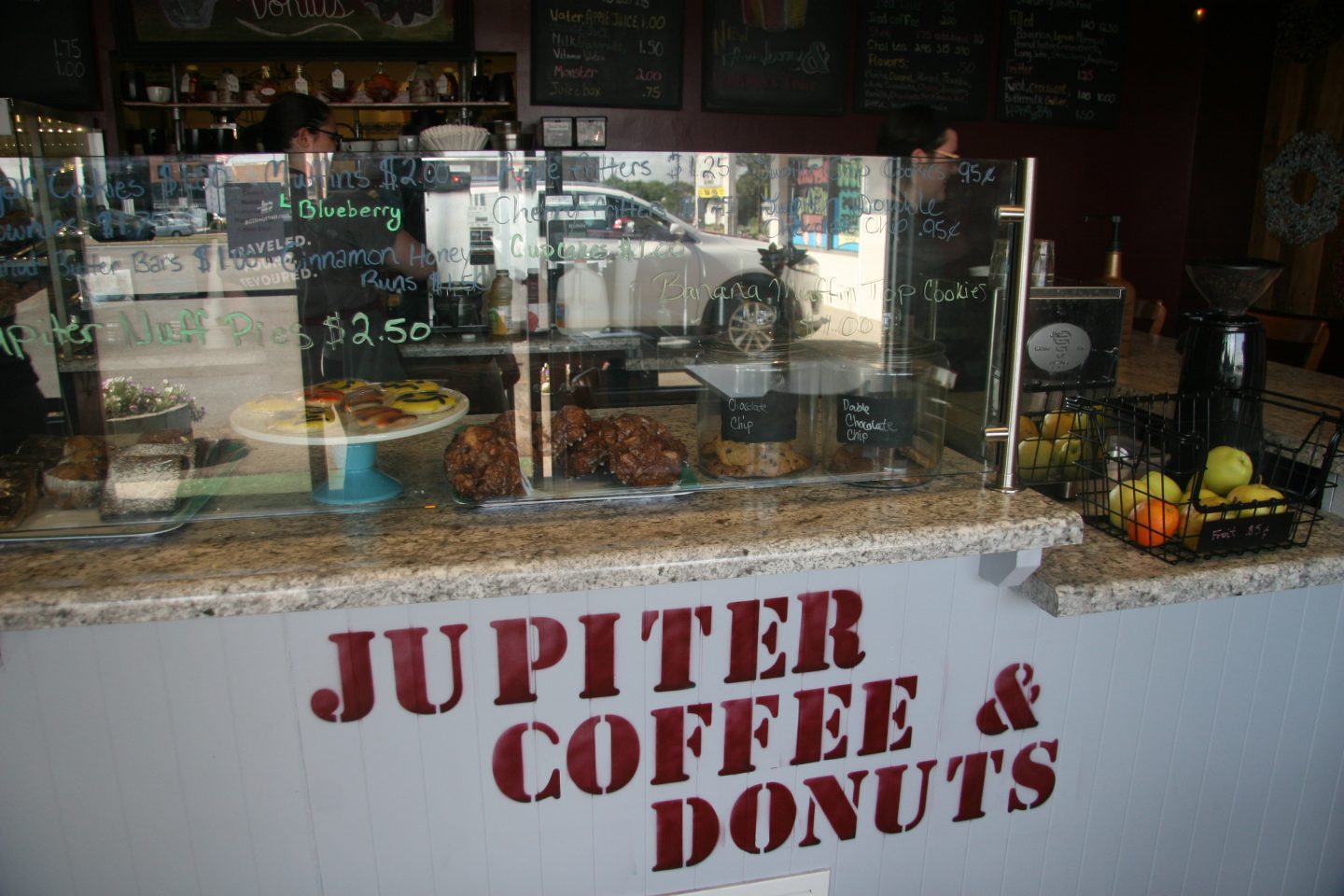 The best way to start any day! 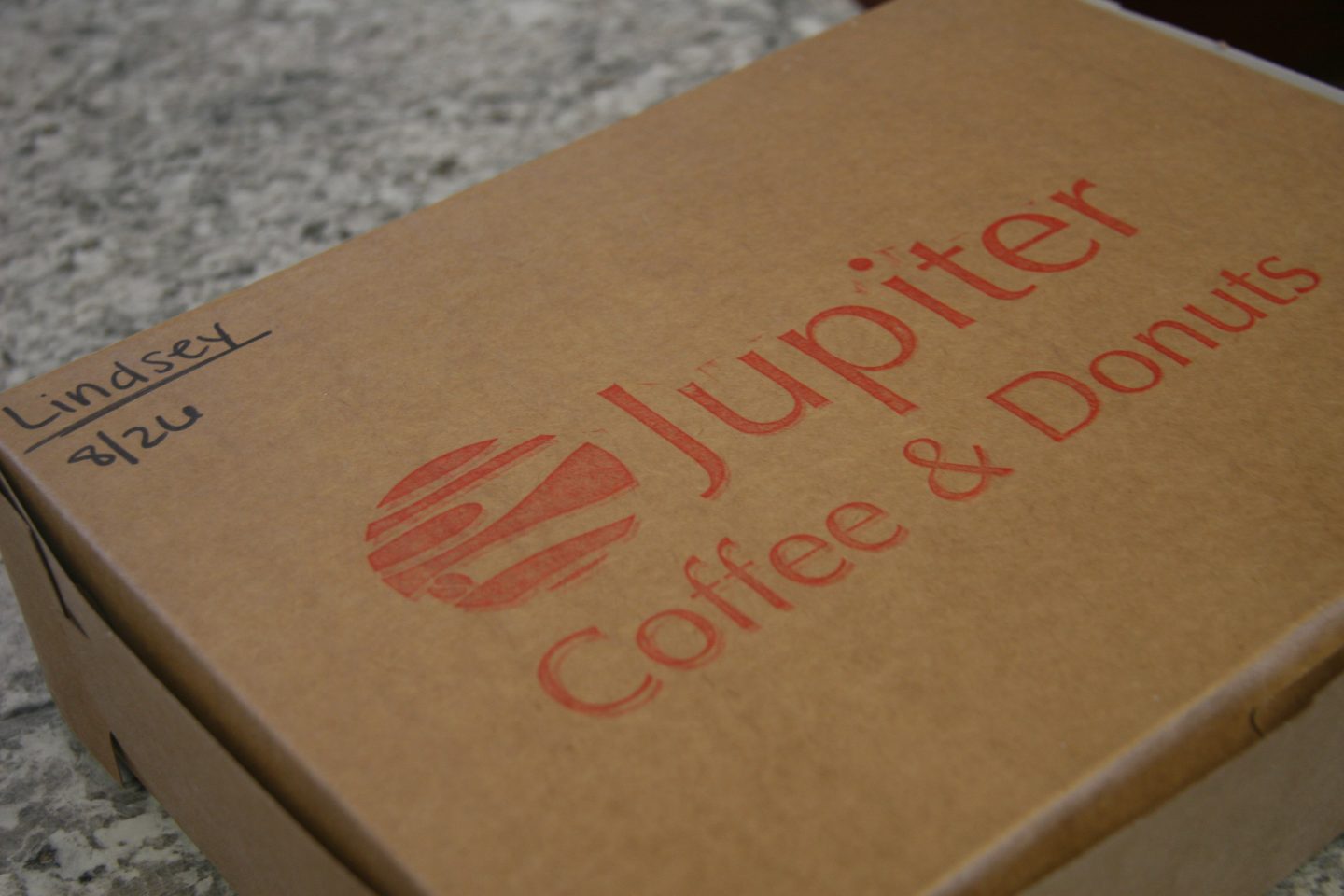 There’s really nothing cooler than walking into a donut shop and having a box of donuts waiting for you, with your name on it. 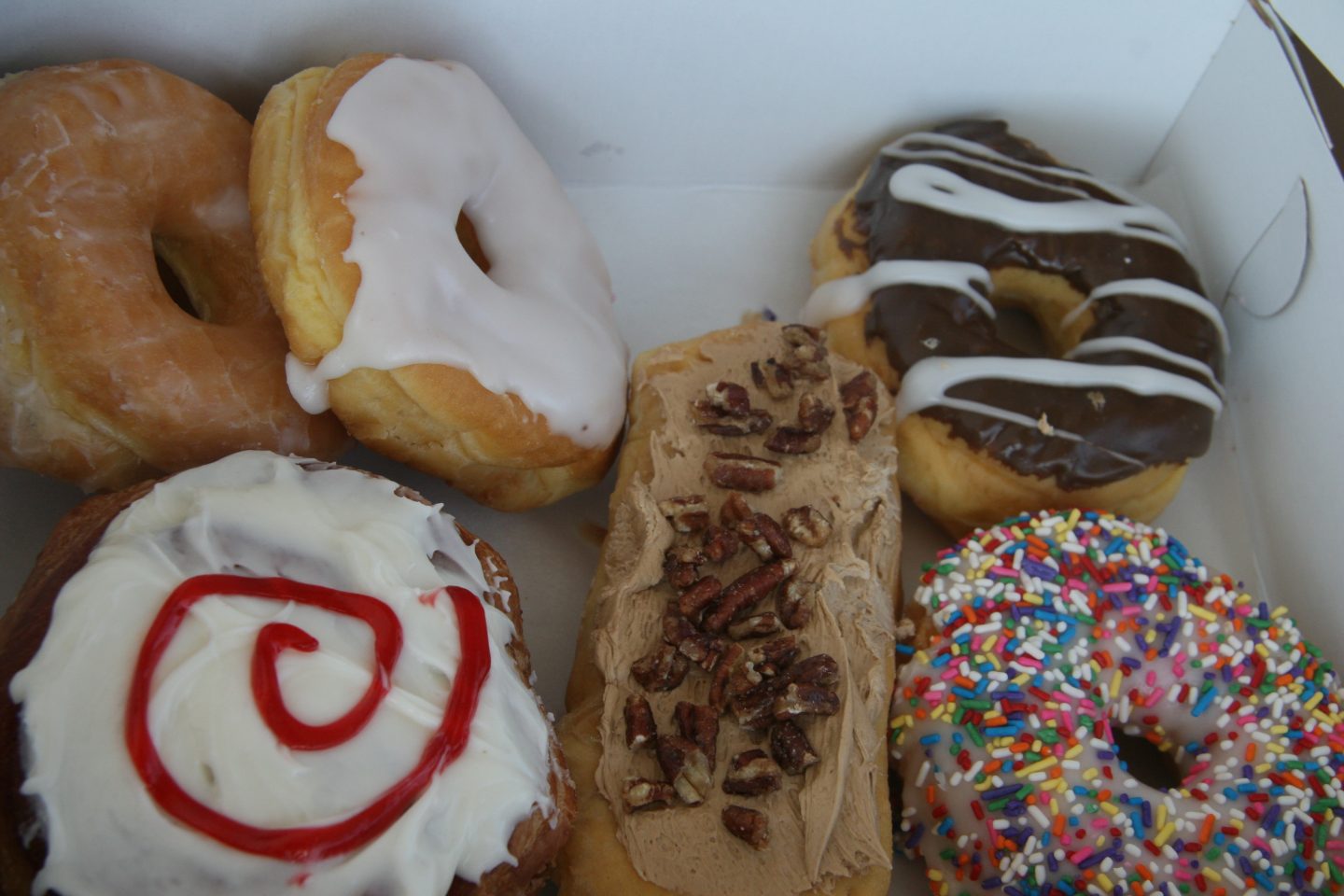 That maple syrup donut topped with walnuts…. OH MY! 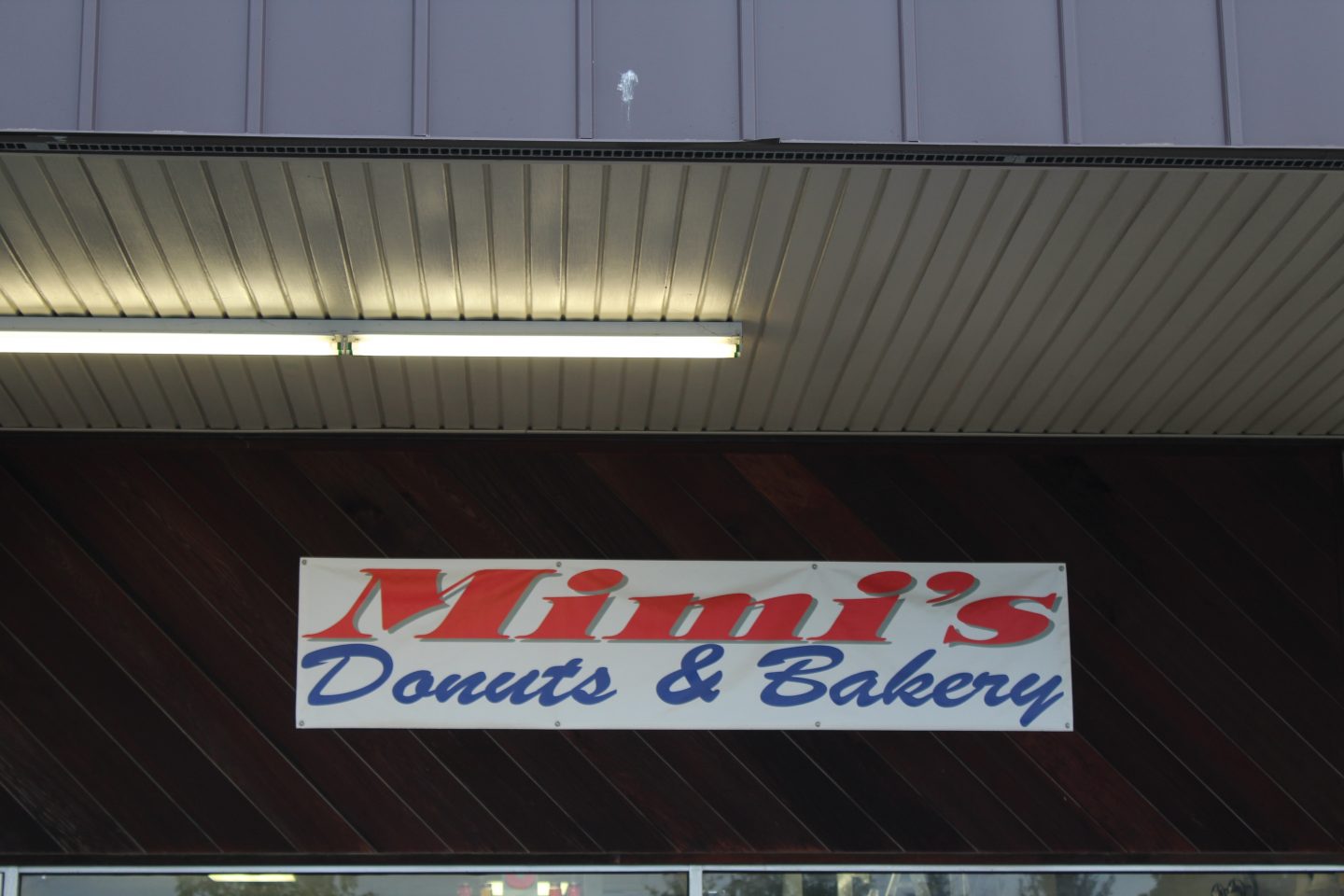 Known for always pushing the envelope, there’s no telling what Mimi will come up with next! 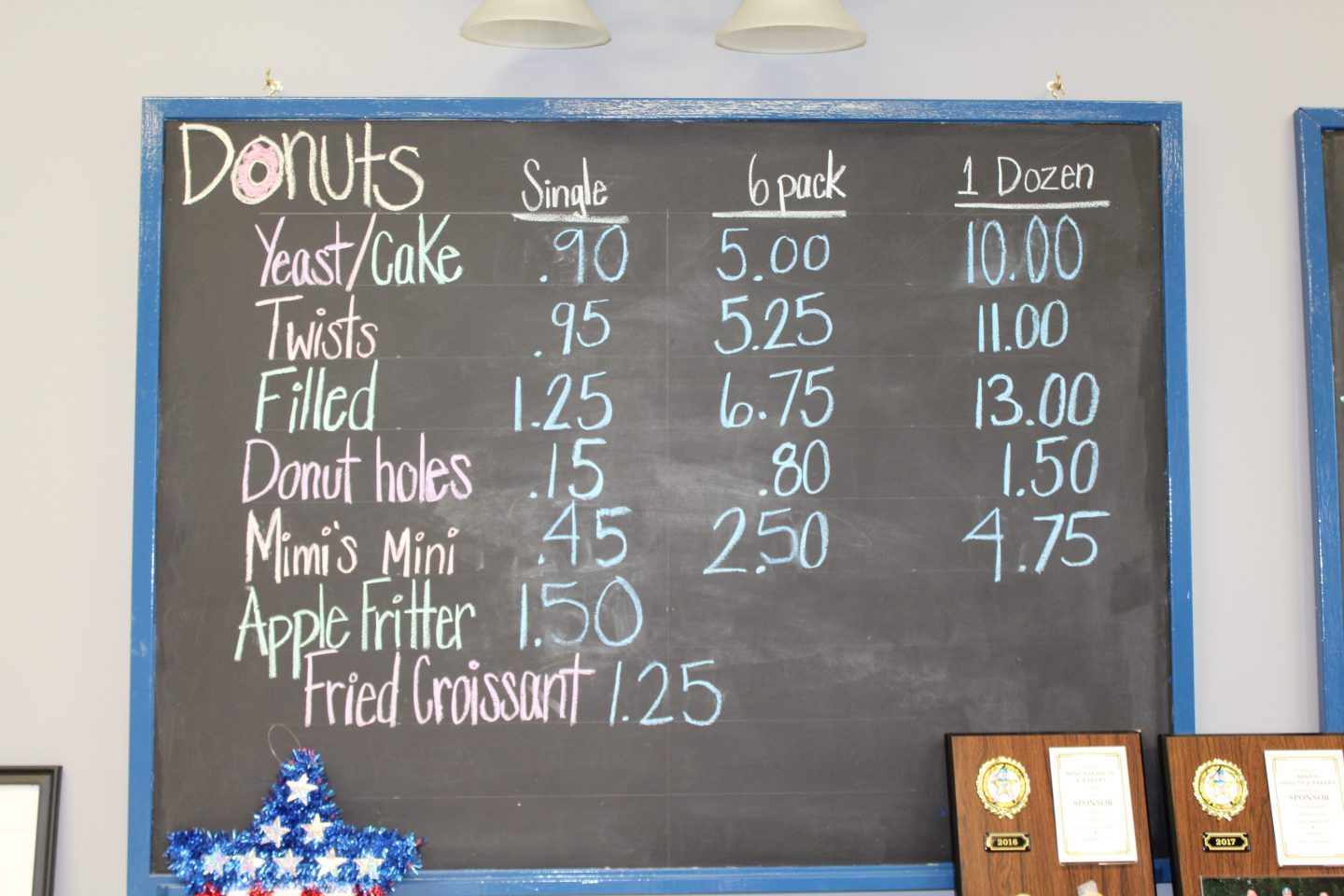 Funfetti, creamsicle and PB&J have all been devoured at this trail stop. 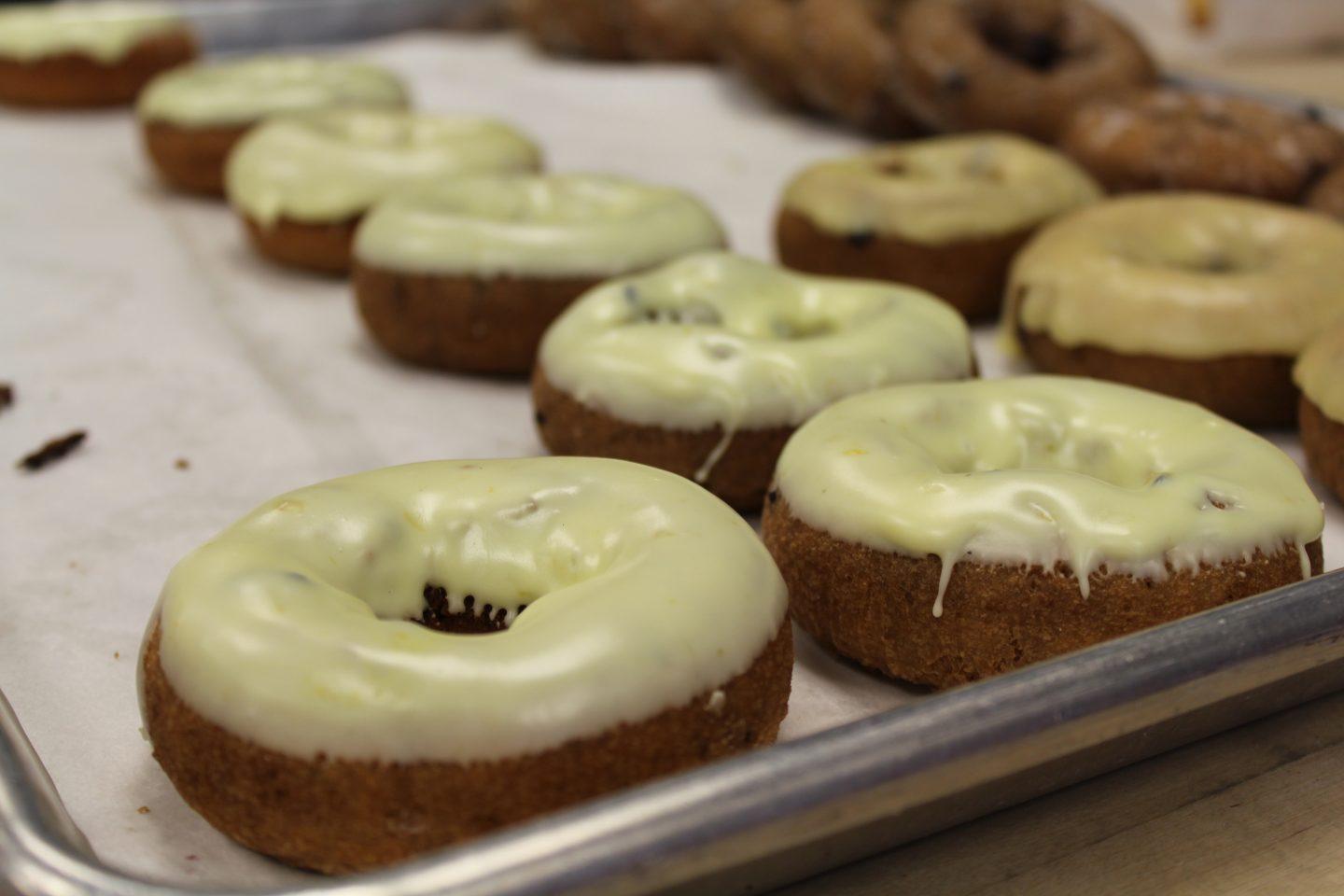 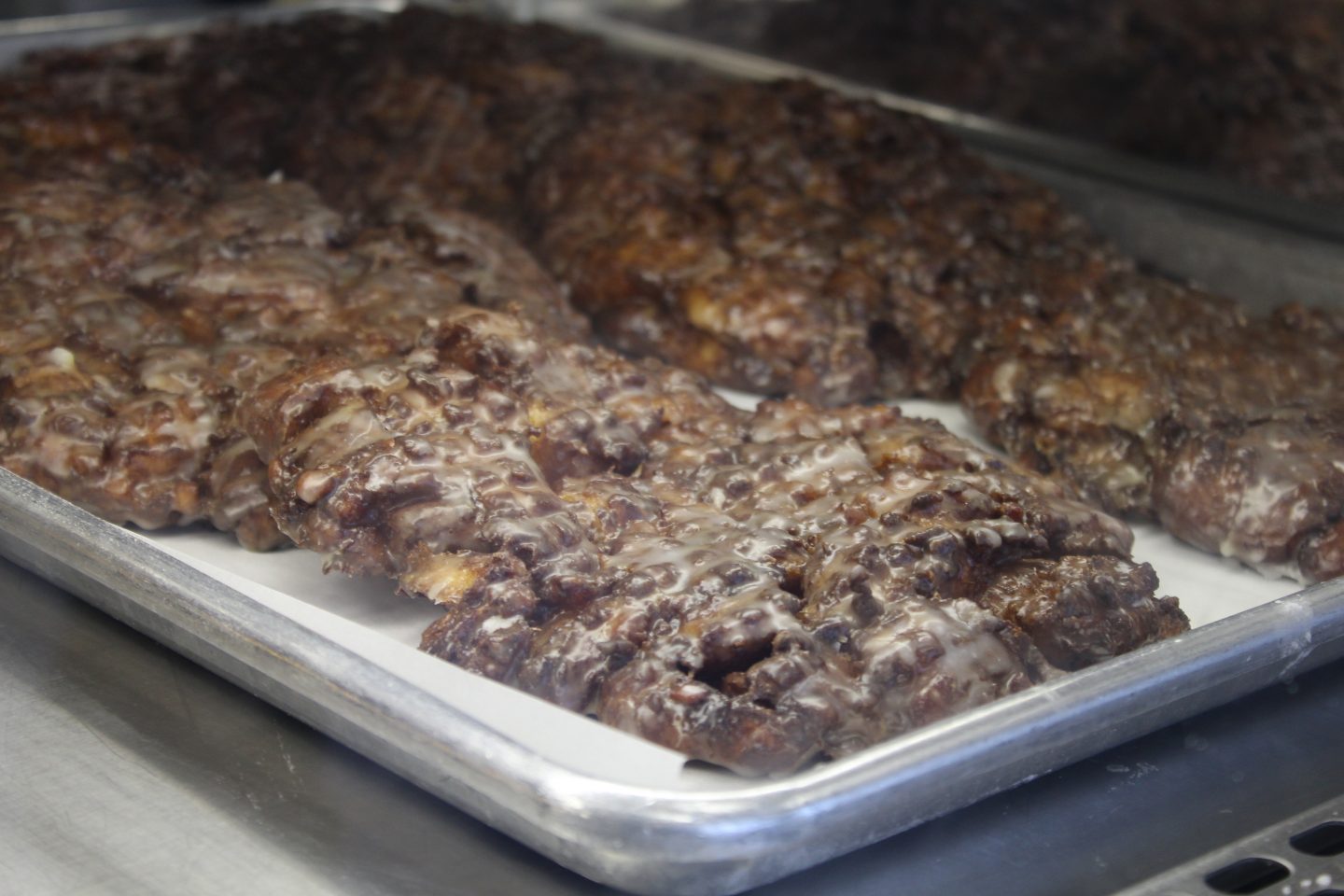 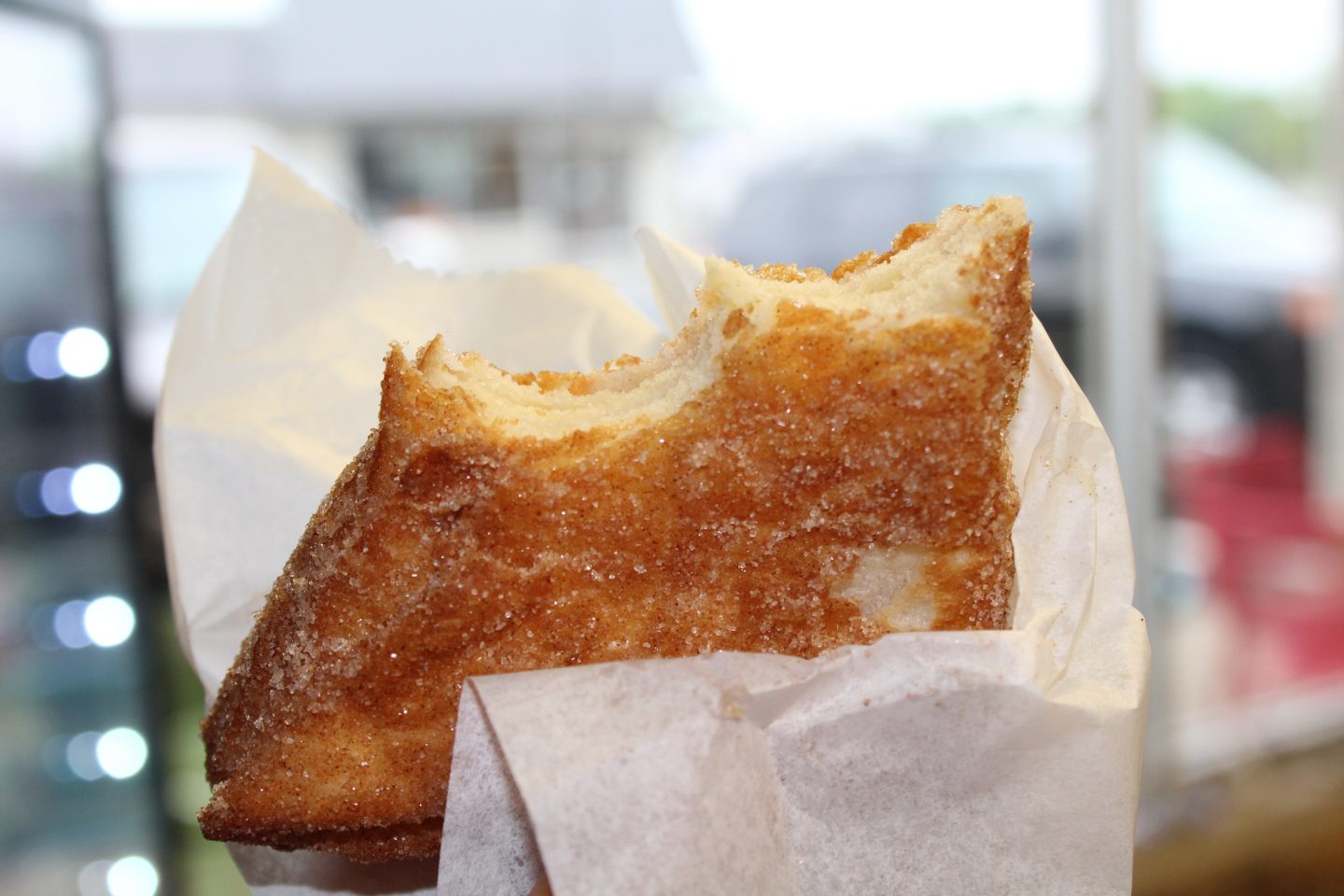 This girl can’t resist anything fried! 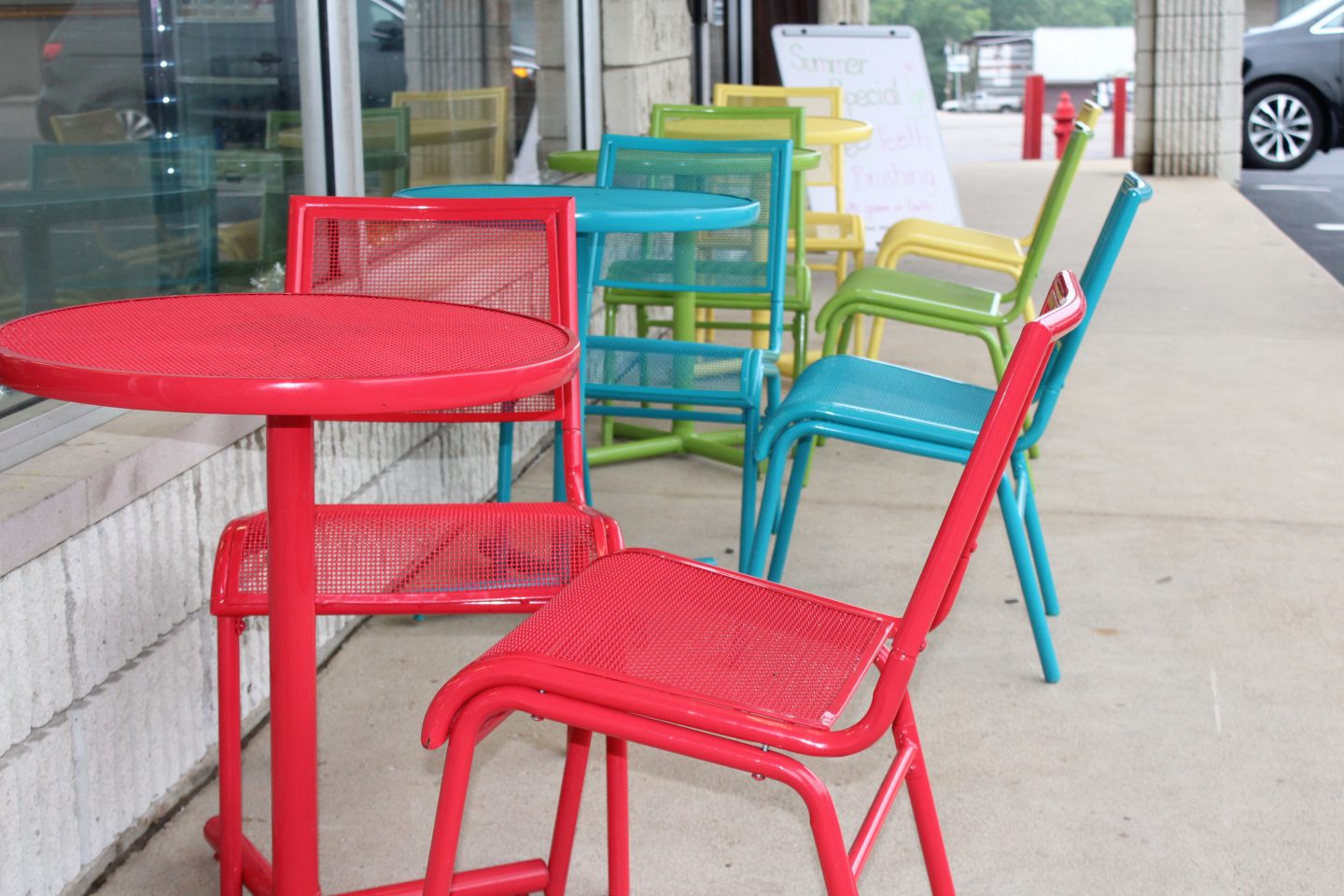 The perfect patio to enjoy a fried croissant on. 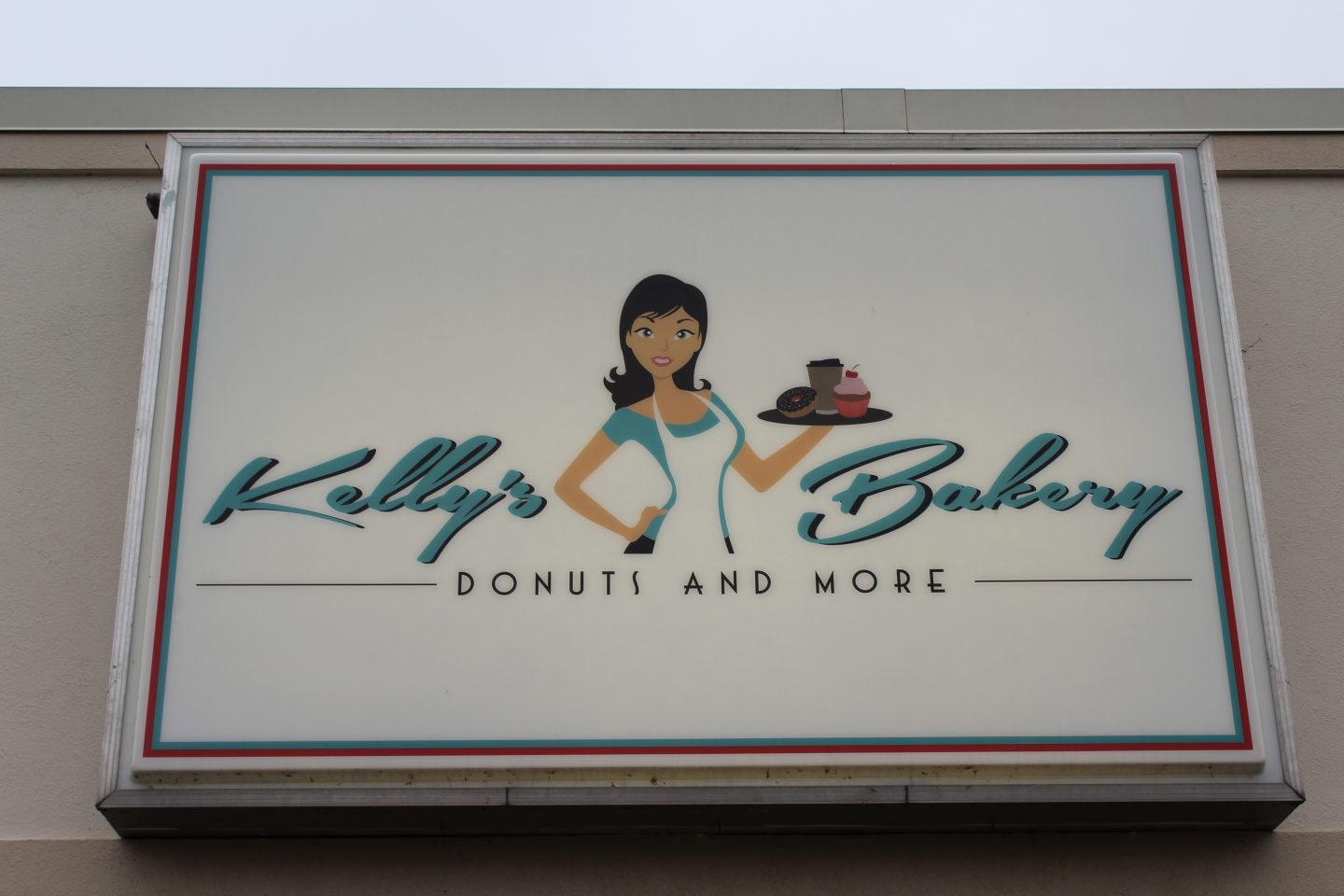 Known for it’s large selection of super-sized donuts including s’mores and buckeye donuts. 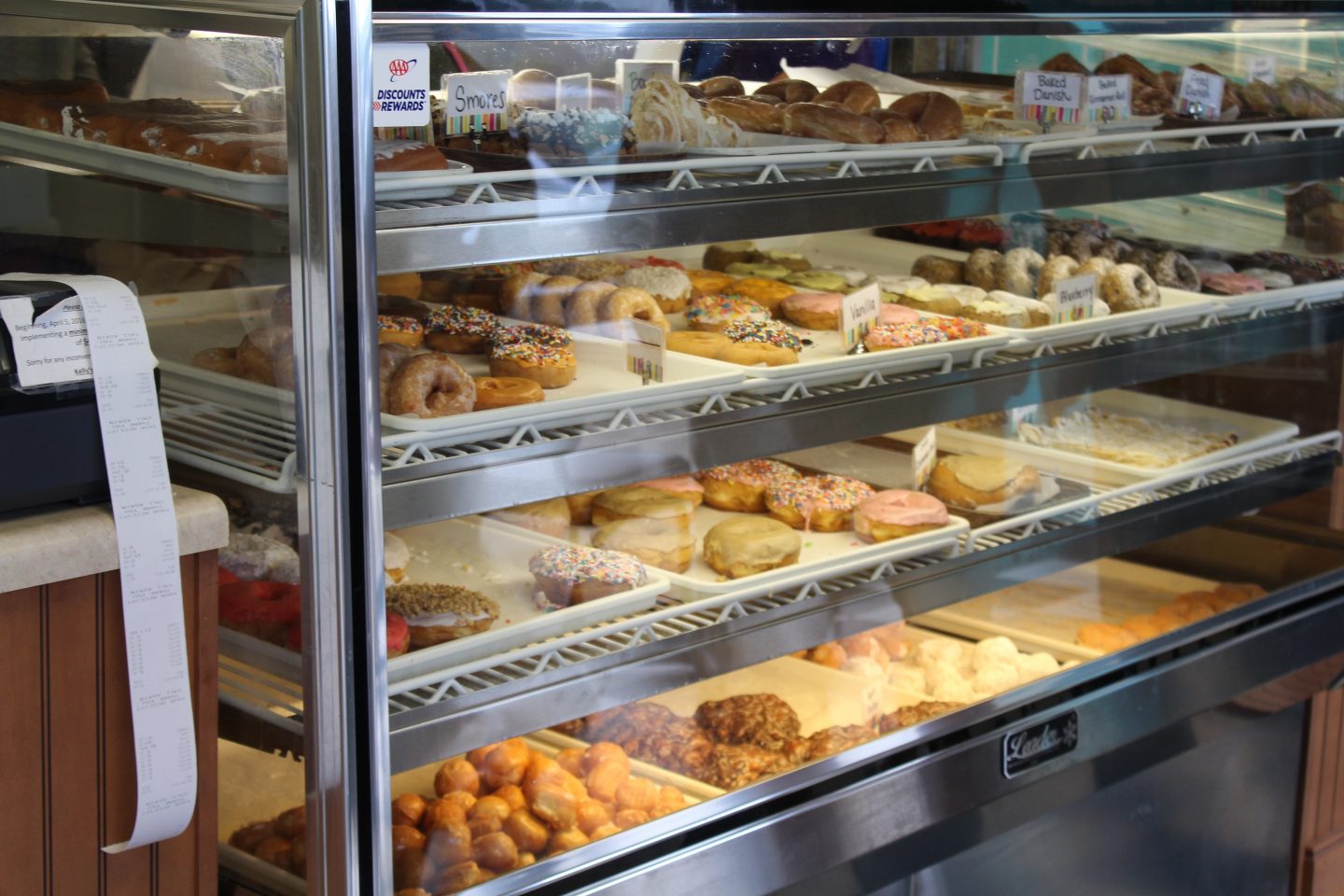 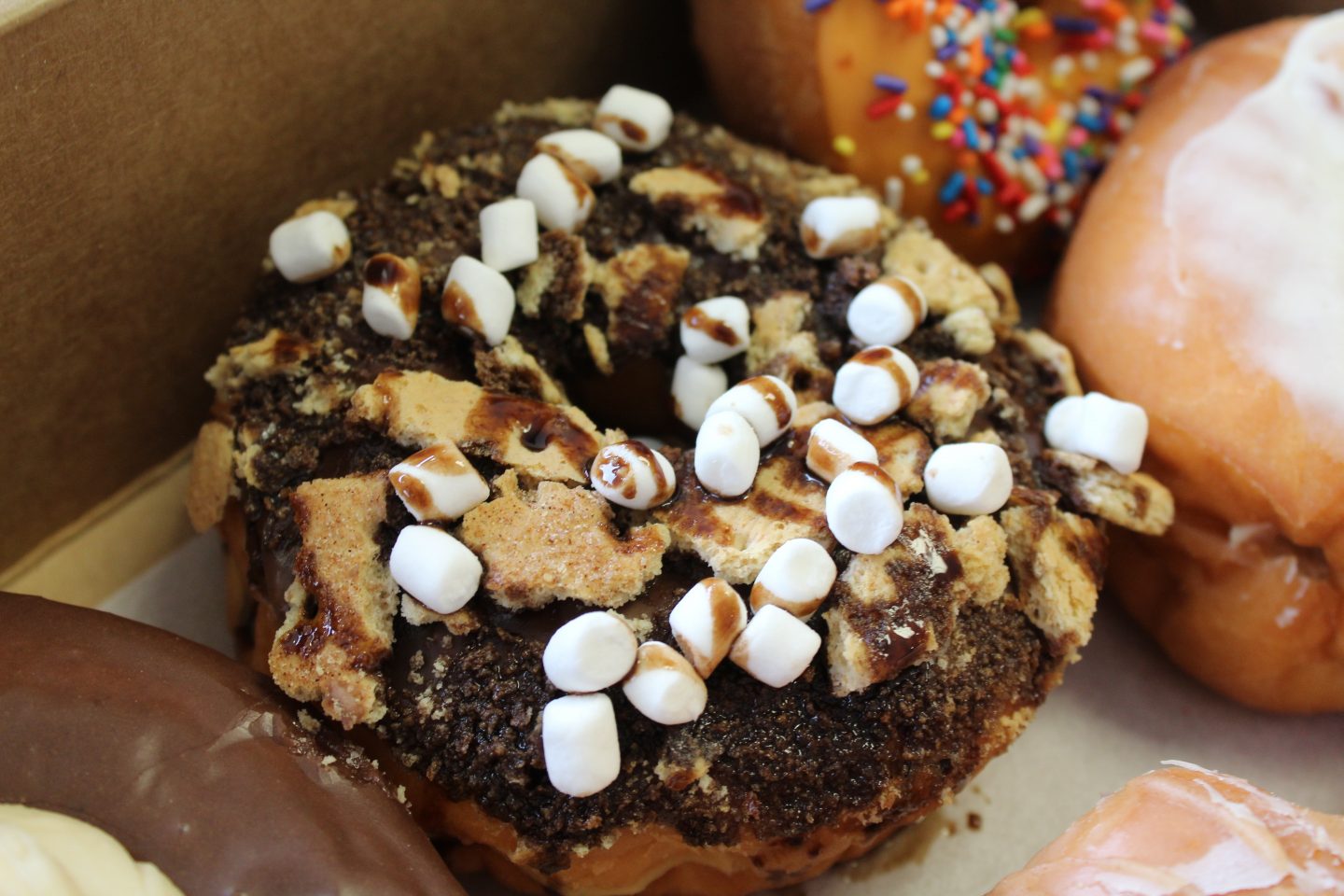 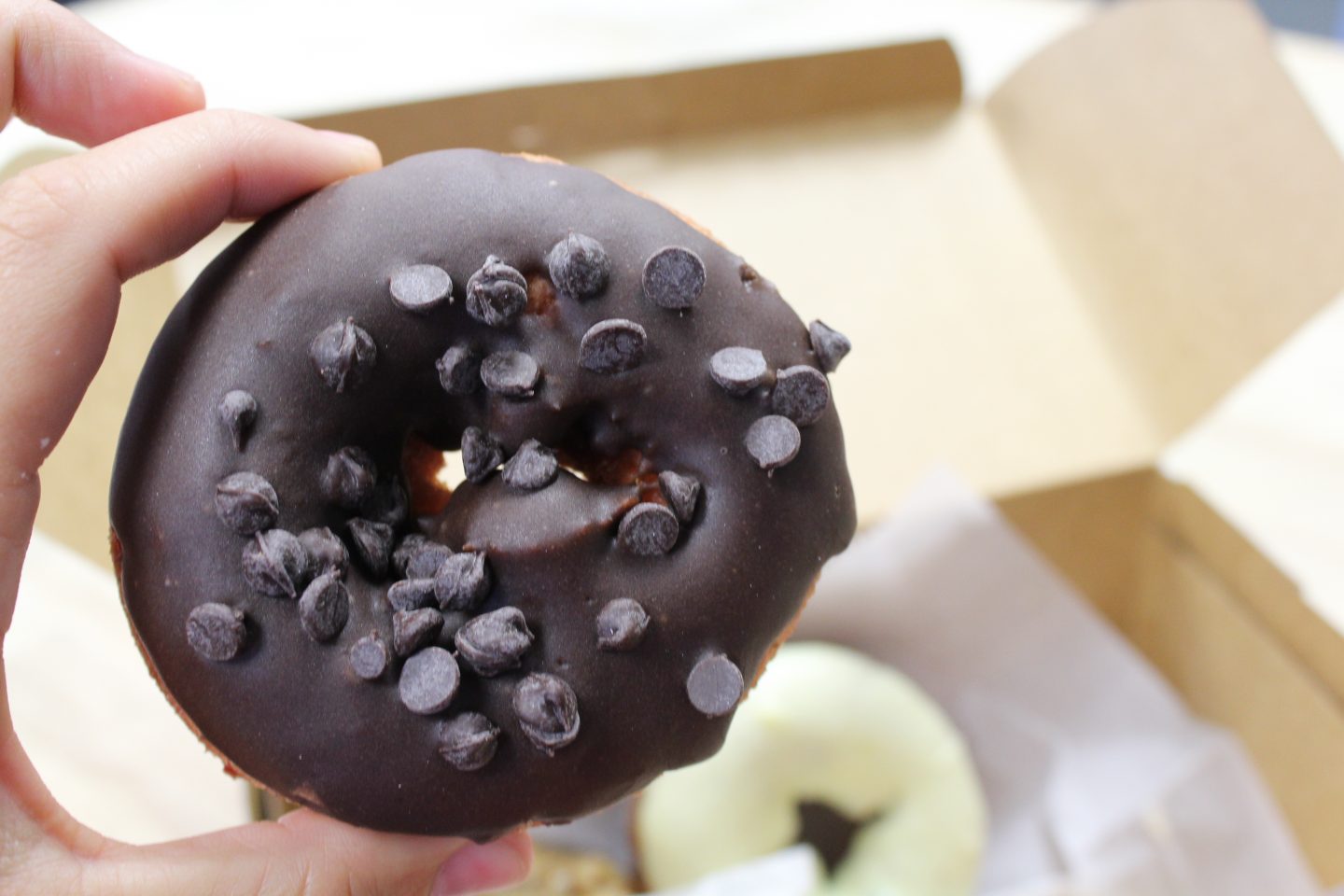 There is so much more deliciousness to be explored on the Butler County Donut Trail.

Unfortunately we only had a couple of hours to visit a few of the shops. I definitely suggest making a day or two of it, it’s easy to over-do it at the first stop, there are so many options you can’t pass up.

One pointer we did learn, a lot of the shops sell-out, they sell-out early and when they are gone the store closes, even if it is before it’s schedule closing time.

Donuts are not meant to be looked at!

Stay tuned for more Butler County adventures on the blog tomorrow, when I’ll share the details from our tour of the incredible, Jungle Jim’s International Market. 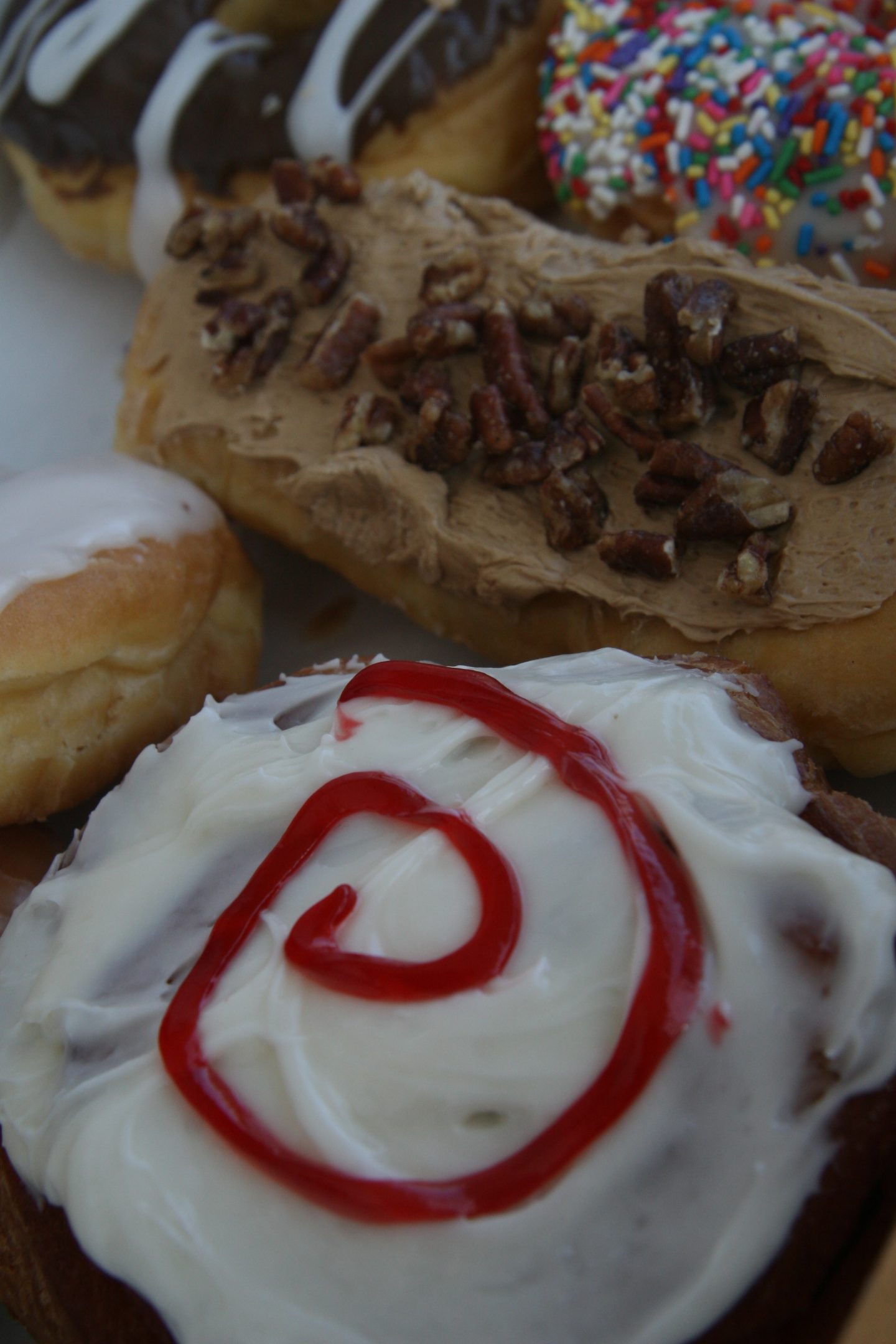