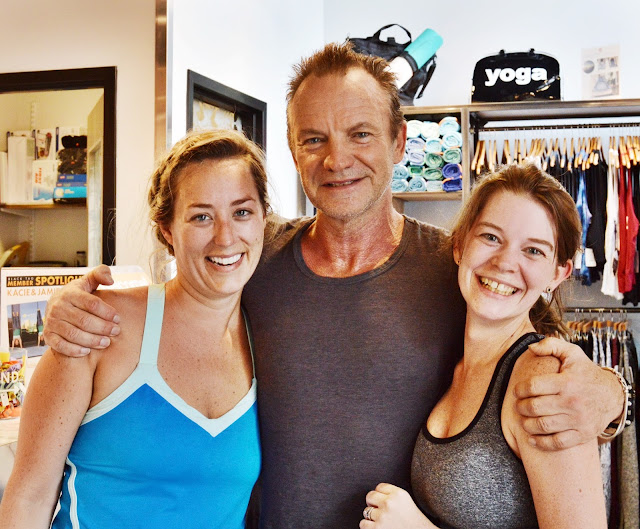 Ok, let me tell you the whole story because as one of our friends said, you DON’T just run into Sting.
A couple weeks ago Colleen from Core Power Yoga reached out to us wanting to link up and work with us. More on that at the bottom of the post. Amber and I immediately YES-QUEENED all over the place at Colleen’s outreach. Uh… DUH we wanted to work with Core Power Yoga! So we stopped by the new studio in the Short North to get some pictures, meet Colleen and check out the studio.
First, we KNOW not enough of you have heard of the CPY Short North studio yet!!! You know how we know, because Sting was able to quietly practice there everyday for WEEKS! Yes, women of Columbus he’s been in town for weeks, staying at The Joseph and practicing EVERYDAY at CPY.
When we met Colleen she let us in on this insider information and I simply didn’t believe her. Ppppsssshhhhhh…. ya right Sting has been here, you must be confused lady.
Fast forward to the next week, I emailed Colleen Sunday night and let her know Amber and I would be in Monday morning for a 9:15 Hot Power Fusion Class. Which means it’s 103 degrees in the studio while you take the class. So, I’m a sweater. Not like a casual sweater, I’m a sweater, sweater. Drip sweater, drench sweater, on the real real. So when you put me into a room that’s over 100 degrees and then ask me to do yoga things start to get real, really fast.
So in Amber and I rush Monday morning, late, per usual. Have you met us? Colleen greets us and first words out of my mouth,…
Lindsey: “IS STING HERE?!?”
Colleen: “Of course he’s in there! He’s our best student.”
Lindsey: “HOLY SHIT! HOLY SHIT! HOLY SHIT! WHAT DO I DO?!?!?! {As I drop everything and flail around like a totally insane person.}
Colleen: Look of HORROR
Amber: “Ummmm…. be cool?” 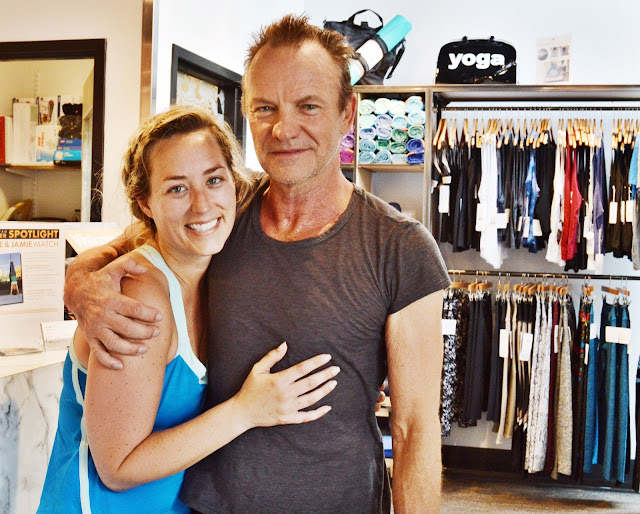 As we are getting ready to walk into the studio, Peter Gabriel himself walks in the front door. My jaw hits the floor. I somehow refrain from busting into “IN YOUR EYES,” I turn to Colleen and give her some crazy hand motions that are supposed to mean I’m literally losing my shit right now and walk into the studio.
Cue all the angels in heaven strumming their harps and rejoicing in hallelujah hymns. There he sat in all his Sting glory with NO shirt on, in black spandex pants. I literally could not stop staring. He sat in the back corner of the class near the blocks. Which I promptly walked over and grabbed some, you know just in case.
So Sting is bendy, very bendy. Has anyone heard the tantric rumors about him? Let’s just say its ALL I could think about! You can tell he’s a very practiced Yogi, taking every pose to the farthest possible position. And that’s coming from me, who can’t touch my toes.
Class starts to end and I am really nervous him and Peter are going to try to sneak out before we get a chance to bombard them. Which is clearly the classy thing to do. As soon as class ends I quickly stand up and run out of class waiting for my chance.
Out comes Peter and without a seconds hesitation I literally lunge for him. The poor man. let me remind you we just took an hour long intense yoga class in 103 degree heat. You can’t stand in that room without sweating so to say we are all drenched is a huge understatement. While Sting is a very practiced Yogi, Peter is more on my level, haha. I don’t offer my hand for Peter to shake, I grab Peter’s hand and start telling him what a huge fan I am and how much I love his music while I am tightly gripping his hand with both of mine. I wish I had a snapshot of his face. I mean this cannot be the first time it’s happened to him and you can’t tell me grown women everywhere don’t fall all over him but he looked, to put it simply, horrified.
And like the asshole I am, I ask Peter Gabriel what he is doing in Columbus? Which he curtly tells me, they are here practicing for their show at Nationwide tomorrow and walks into the locker room. You know when your teacher in school assures you there is no such thing as a dumb question, oh but there is! 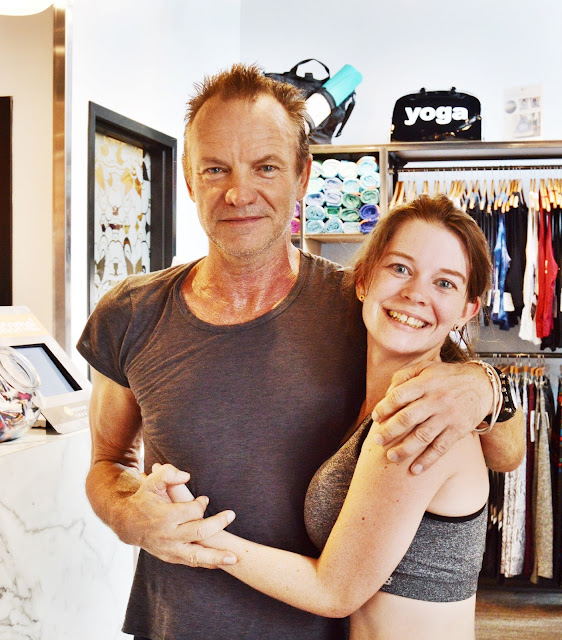 After Peter runs away from me I turn my sights to what’s really important, and here he comes out of the yoga studio. I waste no time in lunging for him too but make a mental note not to ask why he’s in Columbus like I just asked Peter. I’m a fast learner! When I ask Sting if he minds if we grab a couple pictures of him he jokingly says to me, “Yes absolutely, give me a minute I need some makeup!” and disappears into the locker room. Probably to console Peter. But a sense of humor I already like him so much more!
At this point Sting still hasn’t put a shirt on and I’m hoping I get to press myself up against him with no shirt on. Did I just admit that? Also Amber when did you take your shirt off?!?!?!
Sting sits down and I am trying really hard to be cool. Like, so hard you can’t even imagine. I start telling him how we have a Columbus Blog and we are working with Core Power to help promote them in Columbus, “a Columbus what?” He questions. So it’s still unclear if Sting actually knows what a blog is.
Seriously you guys, Sting could not have been cooler, kinder, more gracious and just all around friendly and so so nice! Or sexier! I mean he was the definition of sex, so so so good looking in person! He took pictures with everybody and when we were snapping this picture of him with the CPY instructors he said, “I must have done something really wonderful in another life to be surrounded by such beautiful women.” Swooooooooooon, Sting you know how to smooth talk the ladies. Well played. 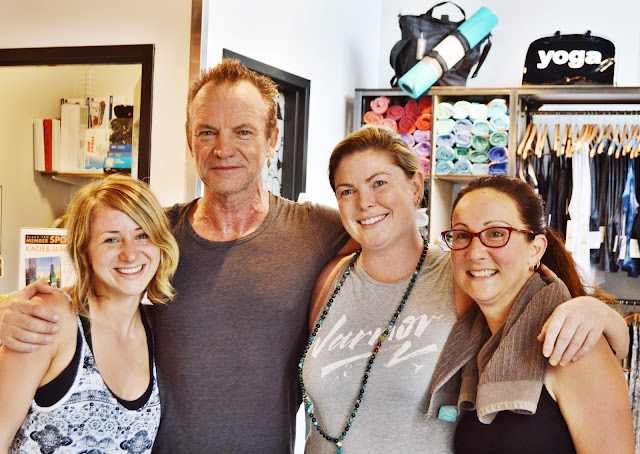 So that’s our Sting story.
I’ve literally told it to everyone I’ve come into contact the past week. If you know me you know I love celebrities and I have no shame. When you mix the two you are bound to get some pretty epic stories. Which I do have and maybe I will pull out of the vault if I can find the picture proof to go with them. Because really what’s a story these days without the proof? But some of my other celebrity stories include Prince William, Toby Keith, David Hasselhoff, The Fray, Stephen Colbert, John Mellencamp, there may be a couple more I can’t recall right now, but those are probably my best! 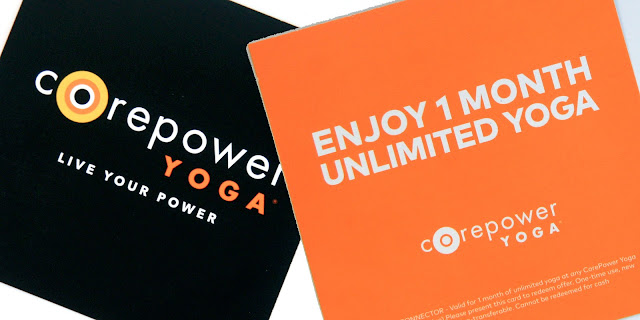 Next week Basic Columbus is going to post THIS picture on Instagram! Be on the lookout!
This picture will signify the beginning of our 1 MONTH UNLIMITED YOGA GIVEAWAY!
You do not want to miss this!!!!
Basic Columbus and Core Power Yoga Short North are bringing you an awesome event on Sunday July 10th at 4:30pm. One lucky winner {+ a Friend} will get selected to come hang out with us and a bunch of other Columbus Bloggers for a fun CPY Class and will also receive the (one) 1 Month Unlimited Pass to Core Power Yoga!
Sound awesome? Because IT IS!!! We will have all the official entry rules next week but we wanted everyone be on the lookout and tell your friends so you can all enter for a chance to WIN! Make sure you are following Basic Columbus on Instagram so you don’t miss your chance to enter!
Namaste.