If you haven’t gathered from following us on Instagram we attended 614 Magazine’s annual event, ColumBEST, at the Franklin Park Conservatory and had a BLAST! Each year the reader’s of 614 Magazine vote on their favorites in the Columbus area from Best BBQ, Best Burger, Best Workouts, Best Ice cream, you get the idea. Then all of the winner’s with 614 Magazine put on this incredible event where patrons get to eat, drink and be merry among the best of the best in the Bus. Since we consider ourselves to be among the Best in Columbus we clearly fit right in…. 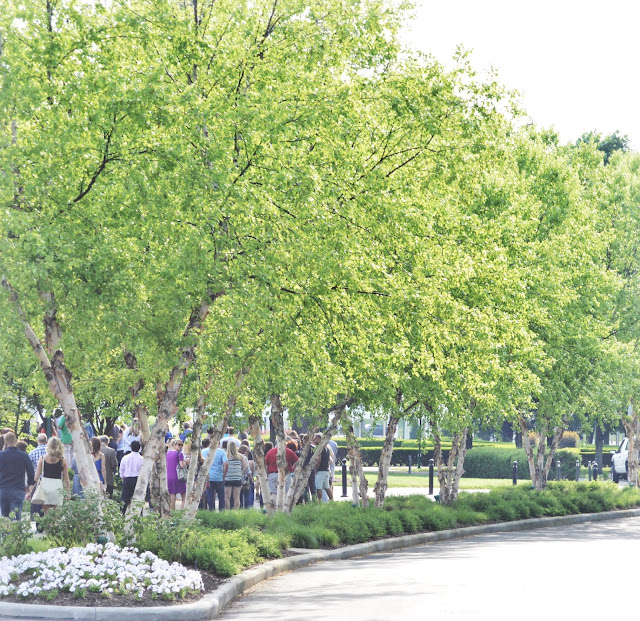 Until we rolled up and I saw this line. Cue the Lindsey meltdown. If you follow me on Snapchat (LooLooLinds) you might have known that I was SO hungry, my blood sugar was plummeting by the second, I was a hot mess literally and I was ready to be fed. I start declaring via Snapchat, “did they invite the Best of Columbus of EVERYONE in Columbus?!?!?!” Nobody has ever called me the calm, cool, collected one, ok. I should also note this event was a $30 ticket (worth every penny), we did not get invited, we purchased tickets, like everyone else in line. 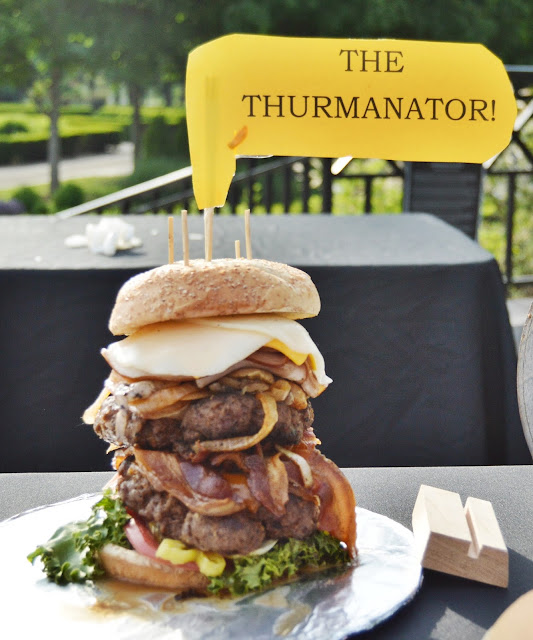 Thank gawd the line moved quickly and the first thing we were greeted by was this beauty. If you are a Columbus Native you have surely heard of Thurman’s Cafe. If you haven’t move it up your list to #1 must do in Columbus! True to the Thurmanator reputation they treated us to whole, delicious burgers. 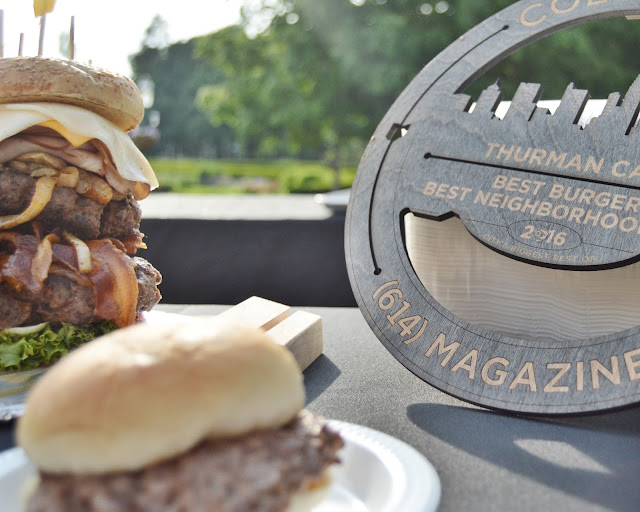 Which I promptly devoured. All was well in Lindsey’s world….now for a drink! 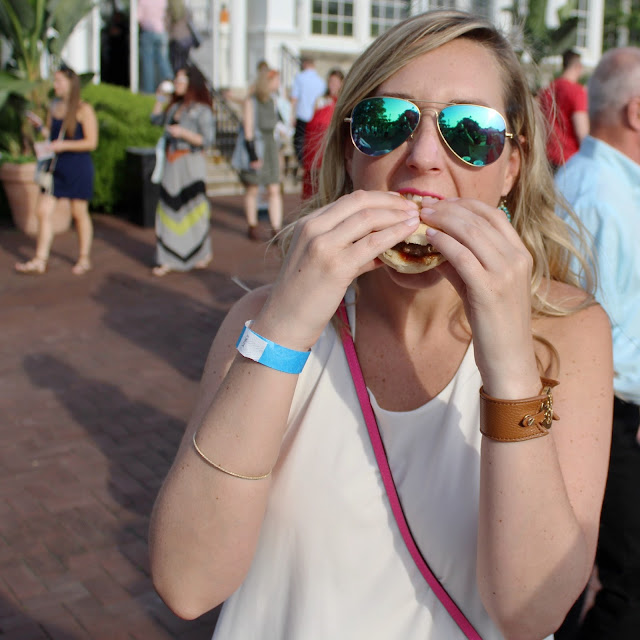 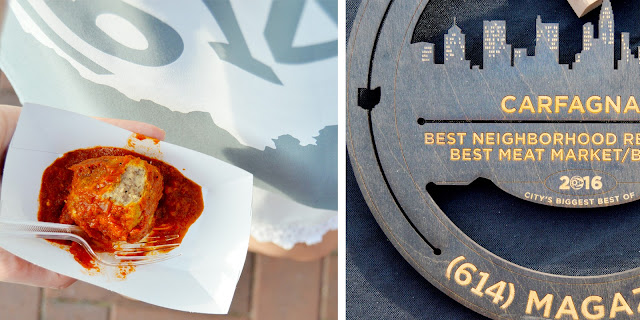 These meatballs from Carfagna’s...BOMB! I mean whoa! We’ve never eaten at Carfagna’s but after trying their sauce and meatball it is now on our short list. Plus I love meaty balls. 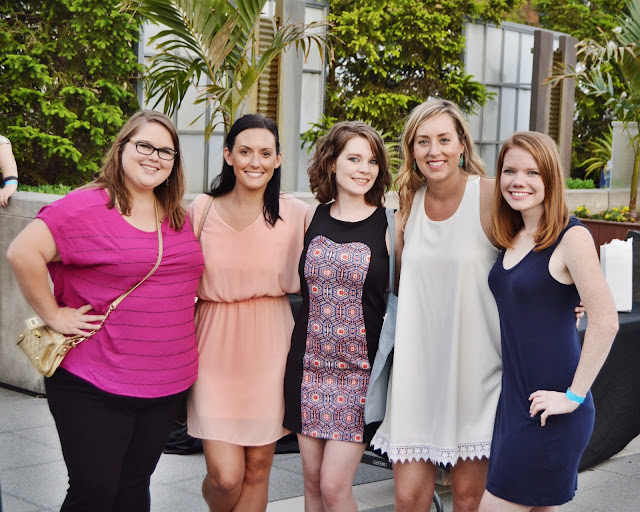 One thing I know Columbus has the very BEST of is Bloggers and Women! All of these gals except Amber are new friends to us through the blog and I can’t go on enough about how amazing it has been for Amber and I to meet new people, new friends, new Moms, fellow bloggers, non bloggers and just other Columbus peeps like ourselves, who share a passion for Columbus. Sometimes it’s hard to get out of your shell and try new things and meet new people and the Columbus Blog Community has been so welcoming, we feel honored to count ourselves among it! Every event we go to and every new face we meet, I am always so humbled by how incredible and supportive the women have been. We love to support other women, cattiness is not what we are about, so to see many types of women get together and be kind to each other all of Cbus really makes us feel like we doing what we should be!
Way to go Women of Columbus! You inspire us in so many ways! 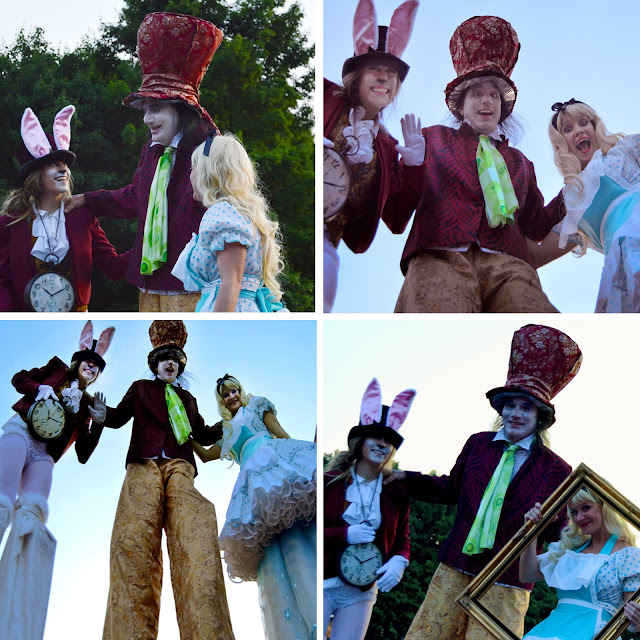 One of the best quotes of the night was when we were standing in line (at the time I was too hungry to appreciate it) Amber saw what looked like Uncle Sam on stilts and was confused. Why would he be there, we had no clue? She literally squealed when she realized it was not Uncle Sam on stilts but in fact Alice, the Mad Hatter and the Rabbit from Alice in Wonderland, one of Amber’s all time favorites! 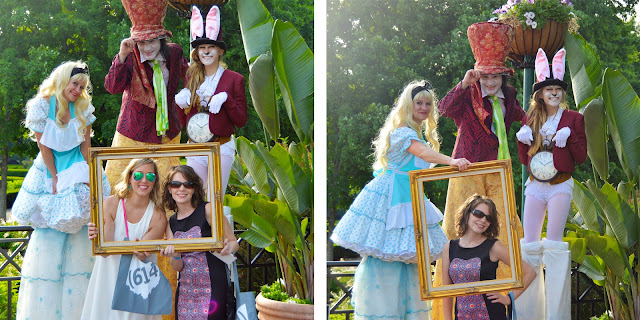 Ensue pictures. Amber even laid on the ground below them in a dress, to get the perfect picture. Dedication, folks. There is a picture of this taken by a 614 Magazine employee, I really hope it surfaces! 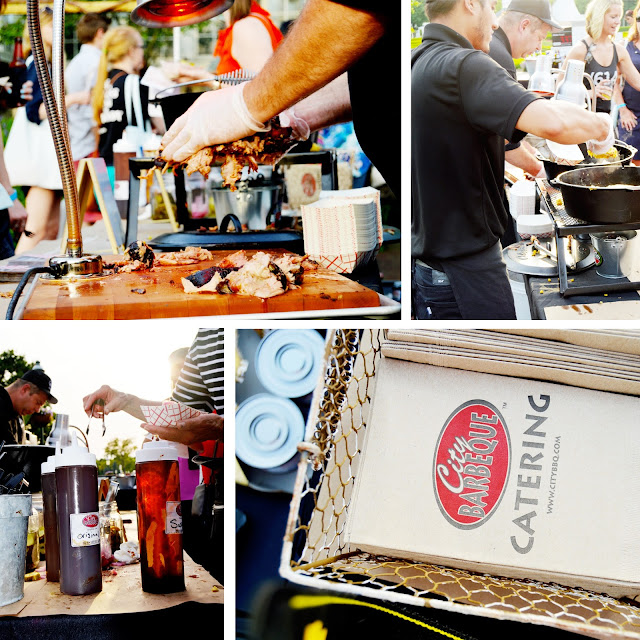 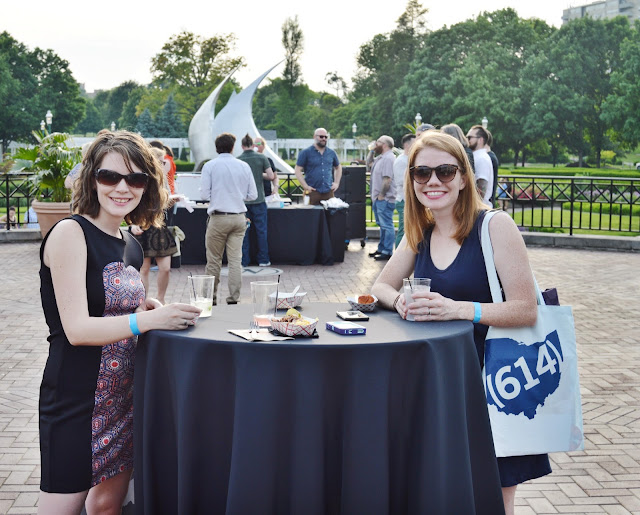 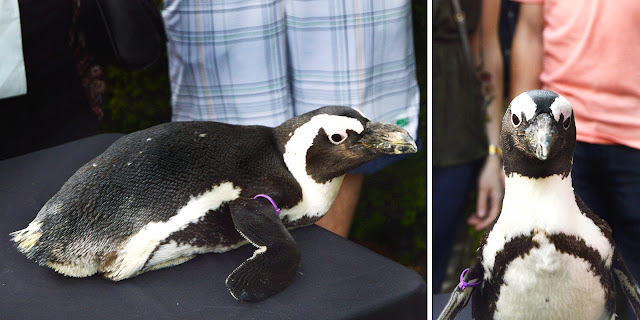 If we are voting Best in Columbus clearly the Columbus Zoo wins! Call me Mrs Popper and her Penguin but Wahoo and I had a moment and he totally wanted to come home with me. He actually kept pooping and trying to jump off the table, which is probably what I would do too if hundreds of people were standing around staring at me, trying to pet me. 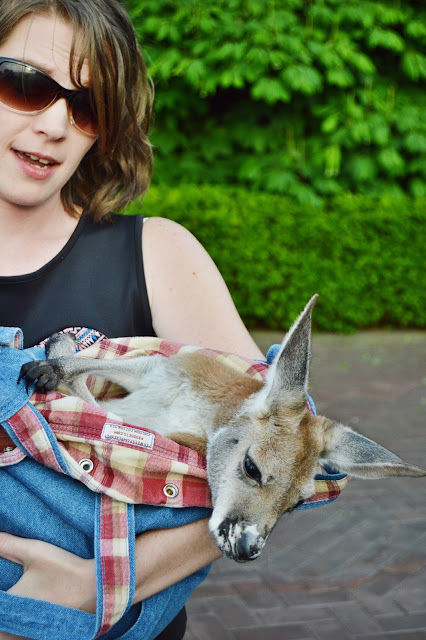 Amber’s always wanted a third kid. She finally got one, a little Joey! 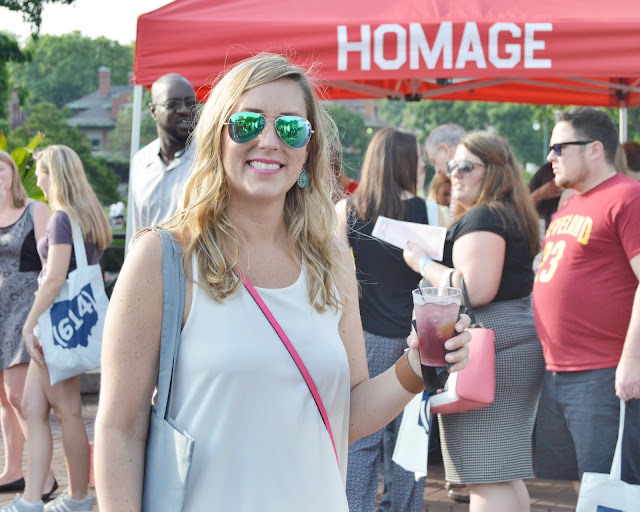 A burger, a meatball and a bevvie in and I’m feeling MUCH better! 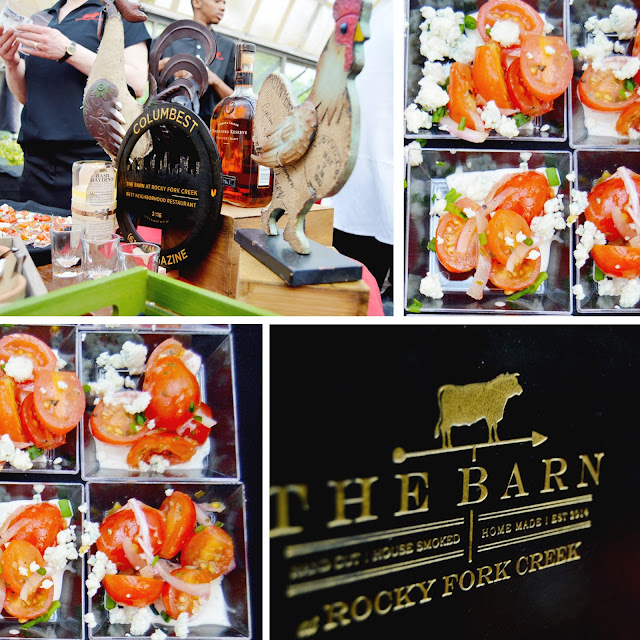 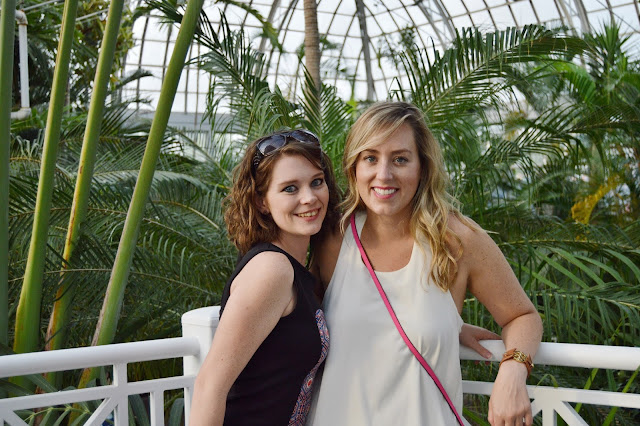 It has been YEARS since I have visited Franklin Park Conservatory and I simply fell in love with it all over again. What a great space for all ages! Eryn of 614Mom Blog mentioned her family has a membership which is totally affordable and worth it. I will be bringing Evelyn back immediately for some of the awesome children’s events they host or just to see the butterflies and beautiful botanical gardens. It is such a cool place that Columbus is home too and just skimming their events page I know we will be back a lot! 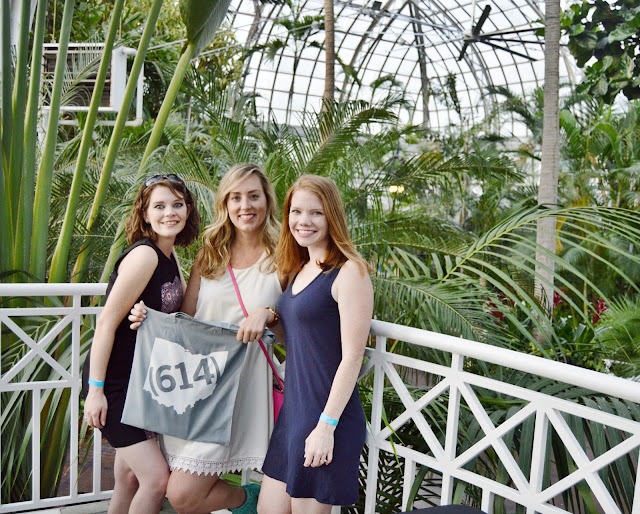 We died over the cute 614 totes 614 Magazine gave everyone upon entry. We have two of these to give away so stay tuned and find out how you can be the lucky winner of one! 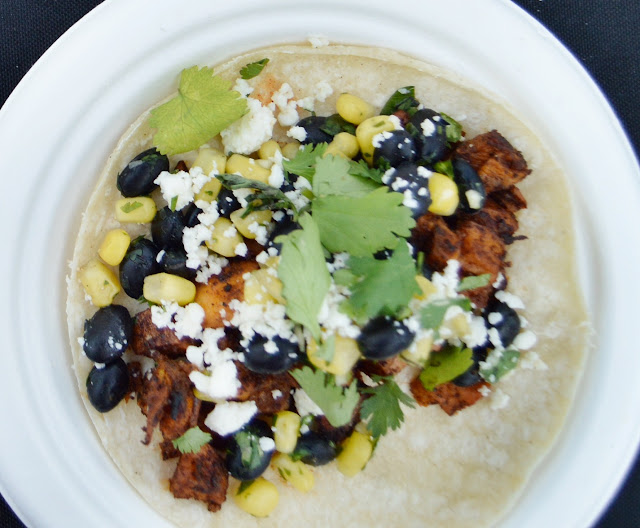 My taco dreams were crushed slightly when they said this was a sweet potato taco but to be honest it was very delicious! We’ve also never been to The Walrus which featured this quaint little taco and it has also moved up our list of places to hit soon. 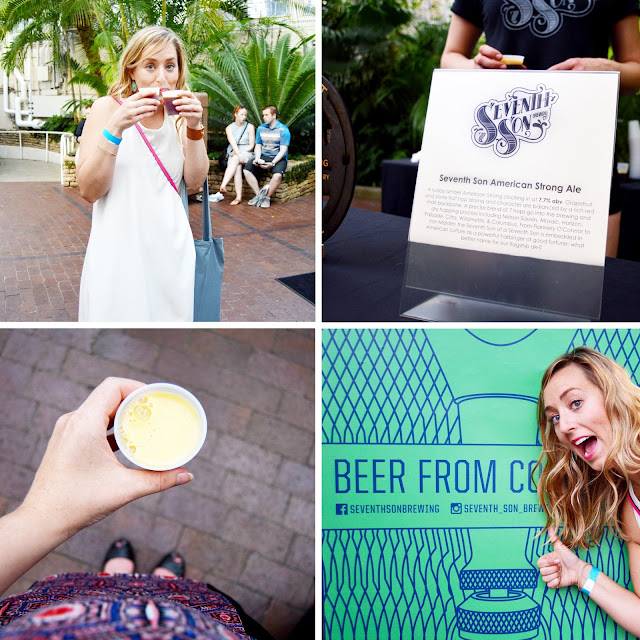 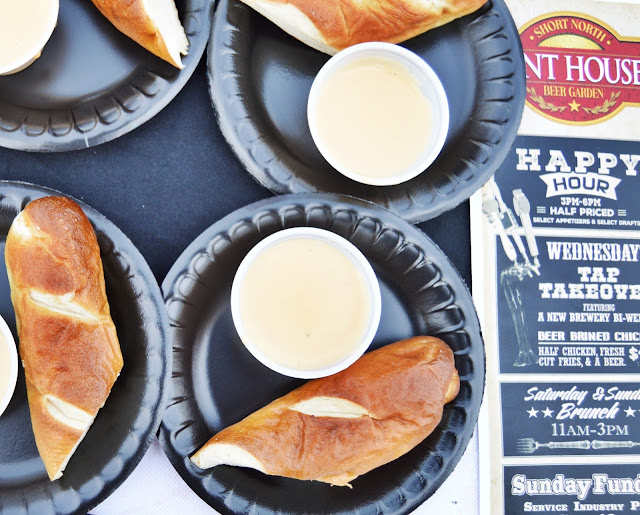 At this point in the night we had eaten so much food I was greatly regretting scarfing that Thurman’s burger like it was my last supper. Amber was rolling around taking pictures groaning, “I’m definitely gonna barf.” And instead of cutting myself off I just kept going and going. Who says no to melted cheese and a pretzel. Not even me when I’m miserably full apparently. 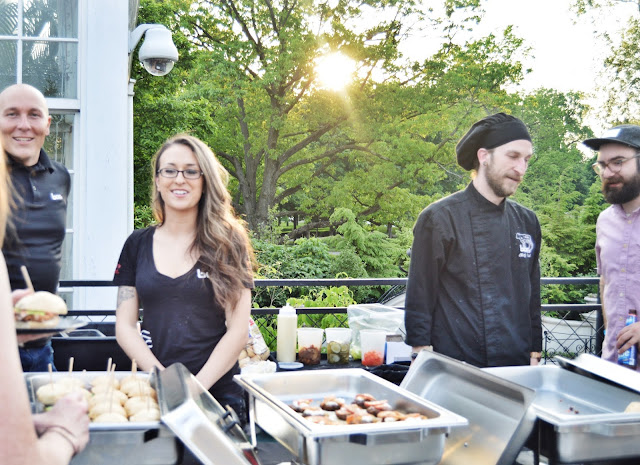 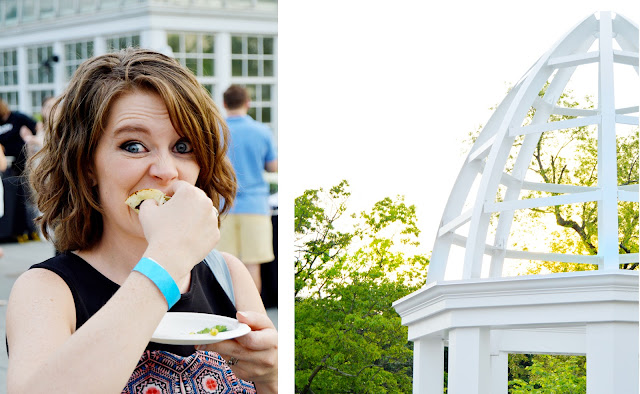 No Ambers barfed in the making of these pictures! All of the food was delicious really, we just gorged ourselves like a Mother who is out without her child for the first time in forever often does. 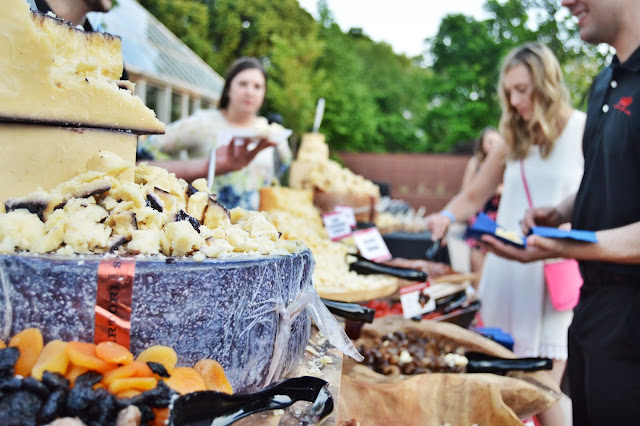 Is this cheese display gouda or what!? This picture doesn’t really do it justice but Amber and I were both blown away my Kroger’s cheese display and can easily see why they were voted Best in Columbus. What this picture does do justice is my clear affinity for the meat and cheese tray. Summer body, not here! 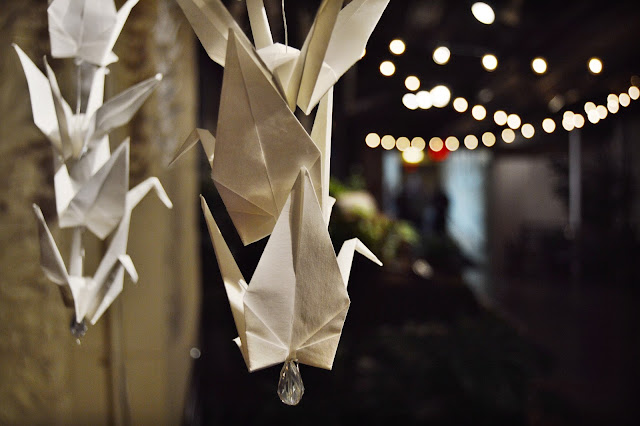 Origami in the Garden
May 21 – November , 2016
Monumental sculptures created by artist Kevin Box tell the story of origami, the Japanese art of paper folding.