I am obsessed with the shirts Chipotle supplied this year for the Columbus Pride Parade. They say it’s all about who you know and I am lucky enough to know Hannah, from The Beard and the Baker, who does marketing for Chipotle as her day job. Megan from Eat Play Cbus also happens to be her sister, so you could say I am well connected.

Gays and Burritos are pretty much my life mantra jams, so representing Chipotle in the Parade by handing out 20,000+ BOGO cards seemed like a natural fit. I have never seen crowds of people lose their shit like they lost them for those Chipotle cards. I have a feeling people thought they were FREE burritos and not buy one get one free, or maybe they did know and people just feel the same enthusiasm about Chipotle as I do. 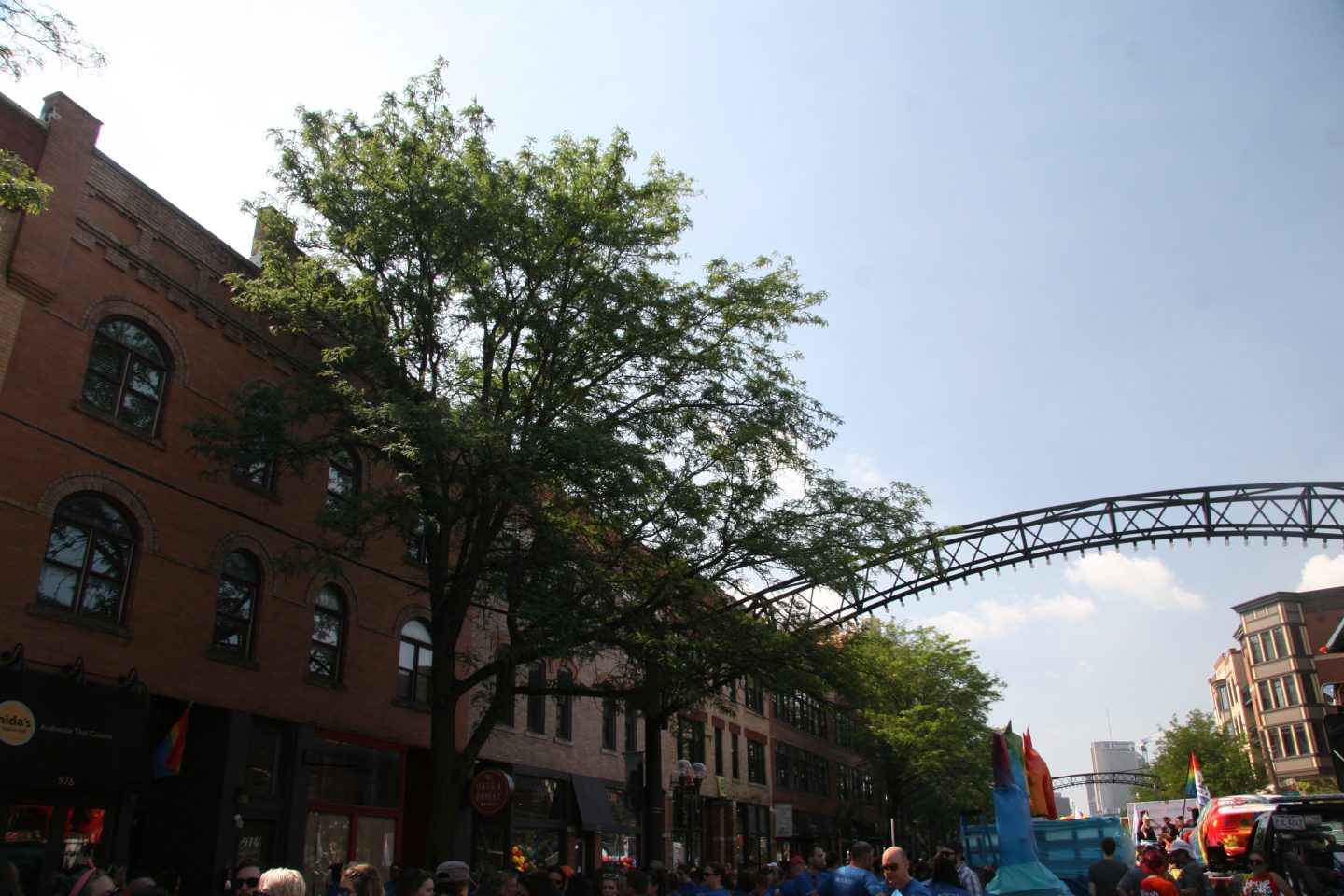 It was hot. Really hot!

Despite the heat it was a beautiful day in Columbus. I have to give a huge shout out to Columbus, CPD and the fantastic people that inhabit this city. Despite a small disruption at the beginning of the parade, there was not a single safety issue. No guns, no fights, no terrorists or threats to our safety. Just a huge crowd coming together for one common cause, to celebrate and spread LOVE! And the people of Columbus showed up, I’ve heard there was over 800,000 people in attendance for Pride in Columbus making it a crowd bigger than Red, White & Boom! 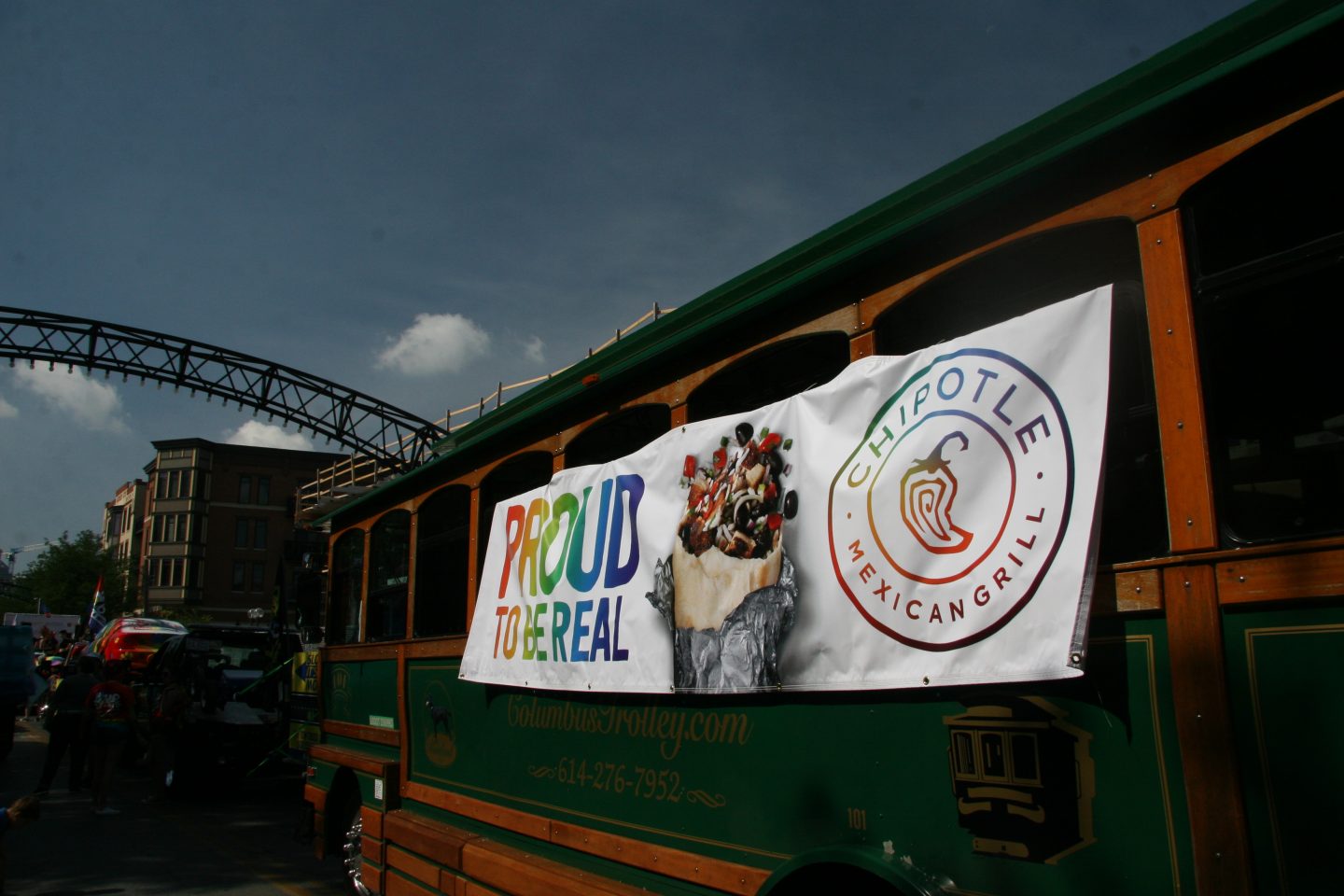 The first Pride Parade in Columbus was in June 1981 – it is SO wonderful to see how far we’ve come and changed in the past 36 years. 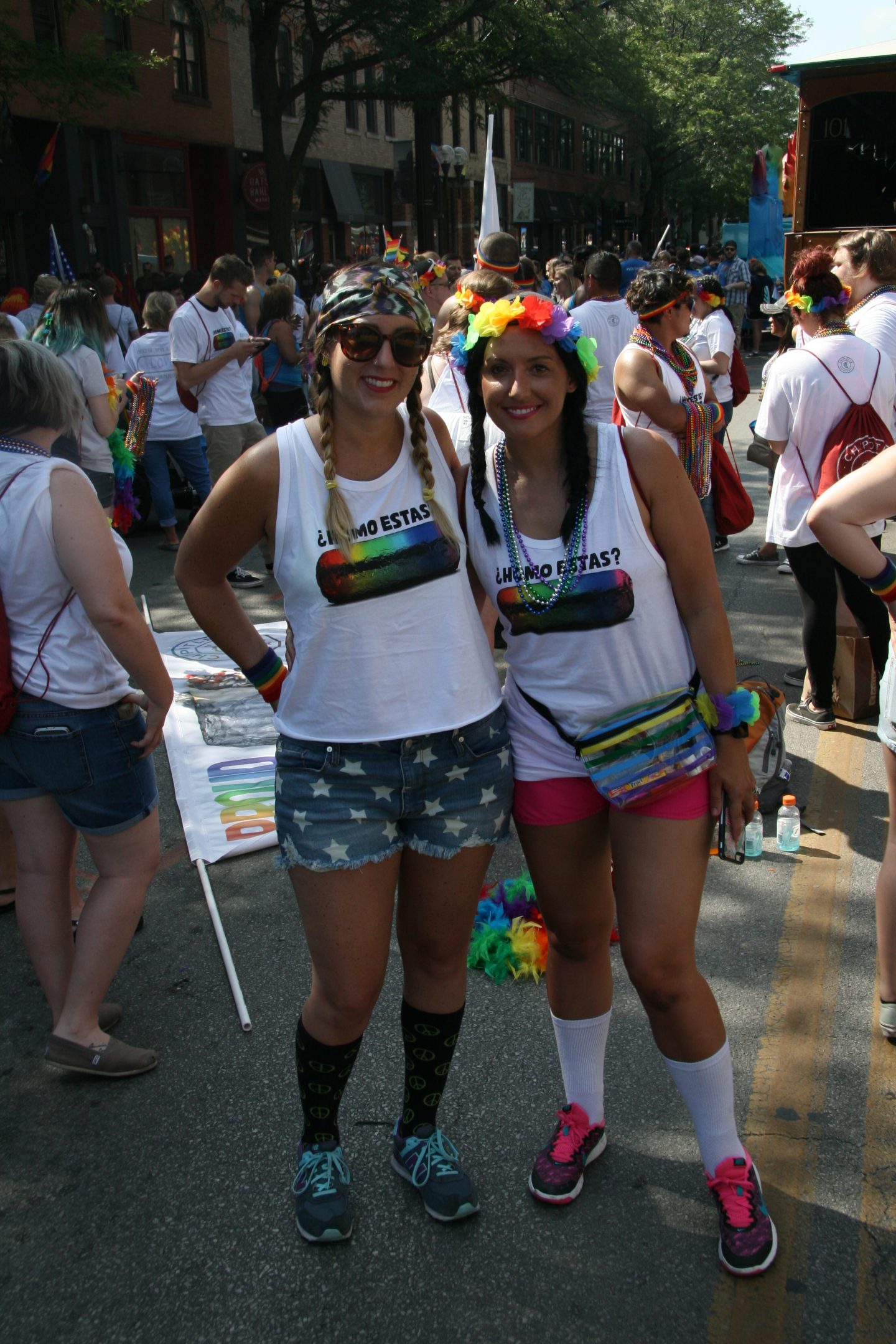 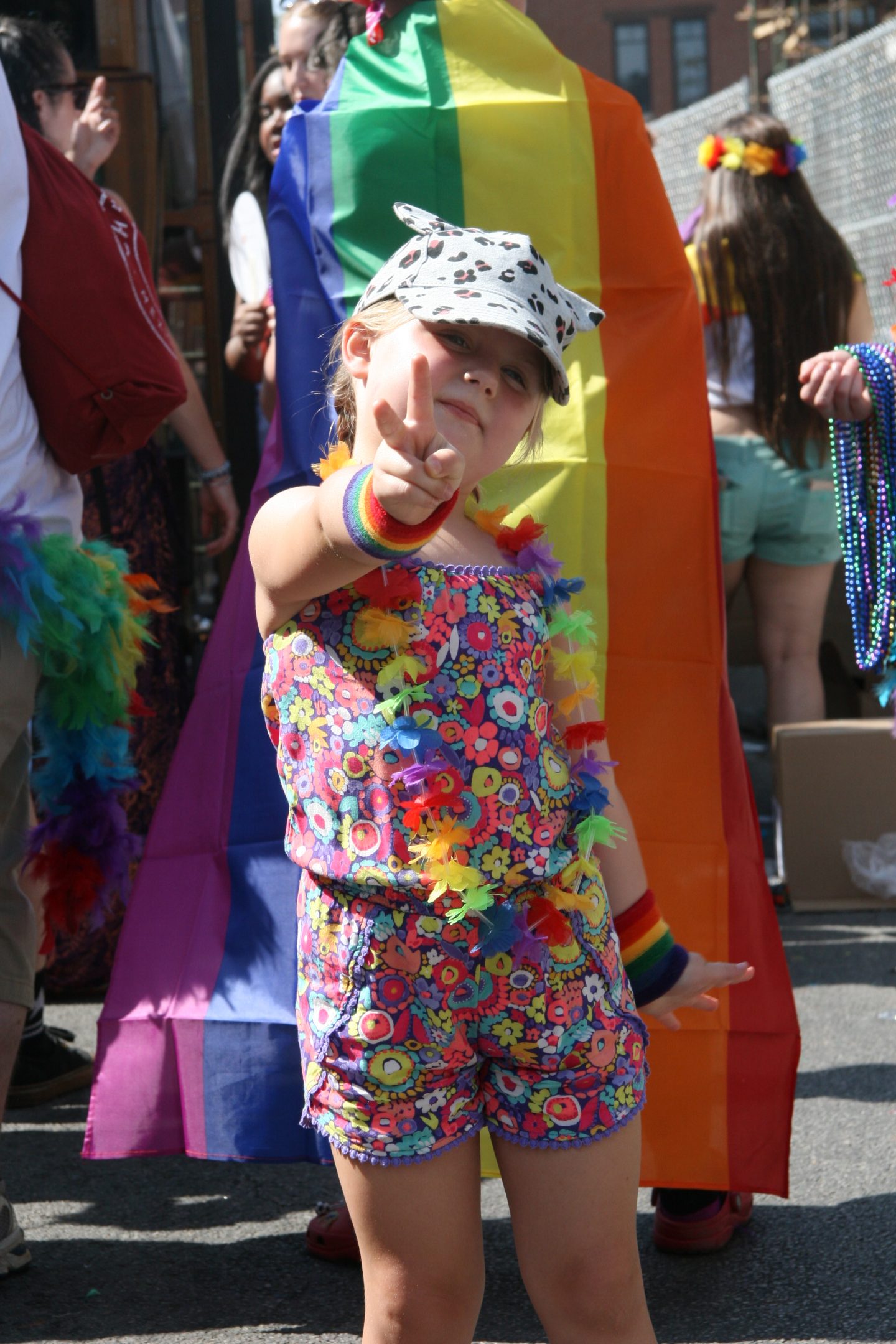 I’m just so proud to be her Mom.

Evelyn’s ability to love abundantly, openly and without judgment is what life is about. It was a long hot day with a lot of waiting, when I’m feeling sweaty and over it, I know the four year old is feeling that times a million! She was such a trooper, walking the majority of the parade, saying to every single person, “HAPPY PRIDE!” She handed out Chipotle card after Chipotle card in the 95 degree heat. She included every single police officer she encounter, announcing, “you’re a police officer!”

I know she doesn’t fully understand what we were celebrating, or what Pride means. When we went to Hawaii for her Uncle Jeremy & Jordan to get married, she didn’t blink and eye or ask a question of confusion and that gives me hope. Generations to come will grow up not fighting for love, but knowing it’s capabilities and that it knows no boundaries. 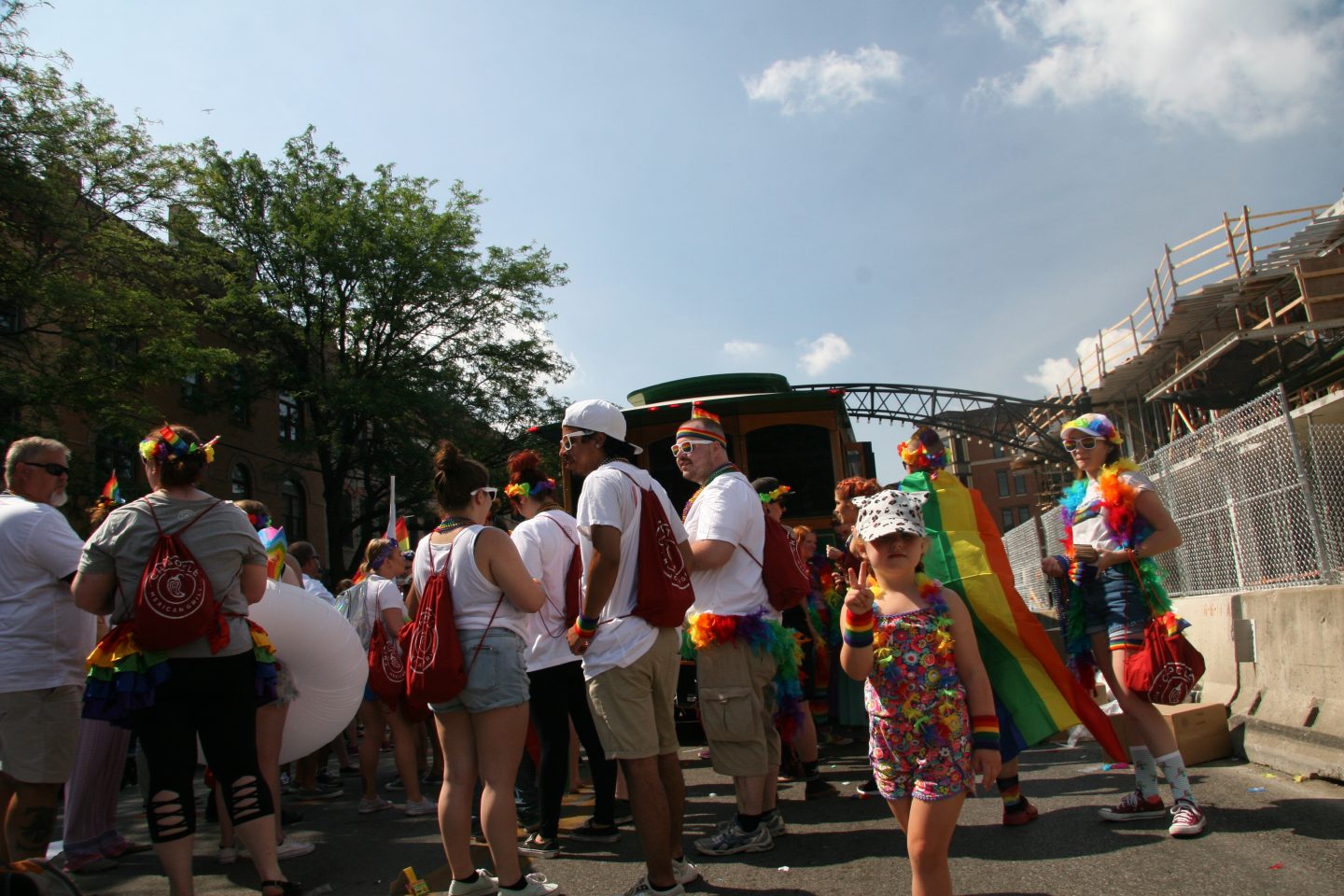 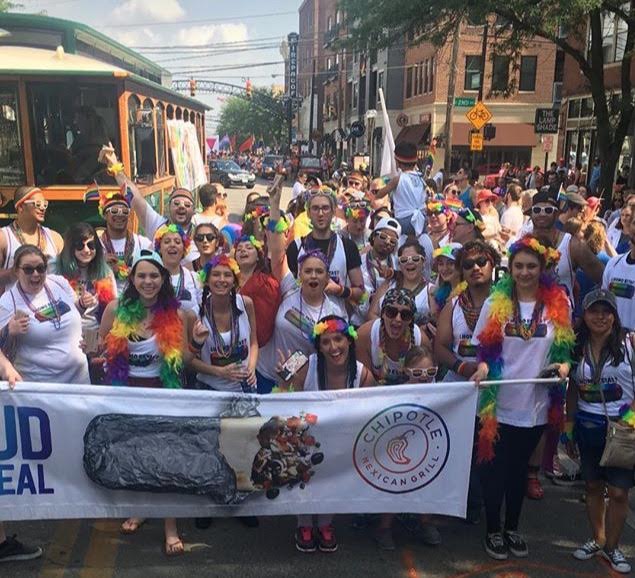 The Chipotle crew was SO fun. We had such a blast dancing and celebrating Pride with this  new group of friends. Thanks so much to Chipotle for having us and for providing the air conditioned trolley! 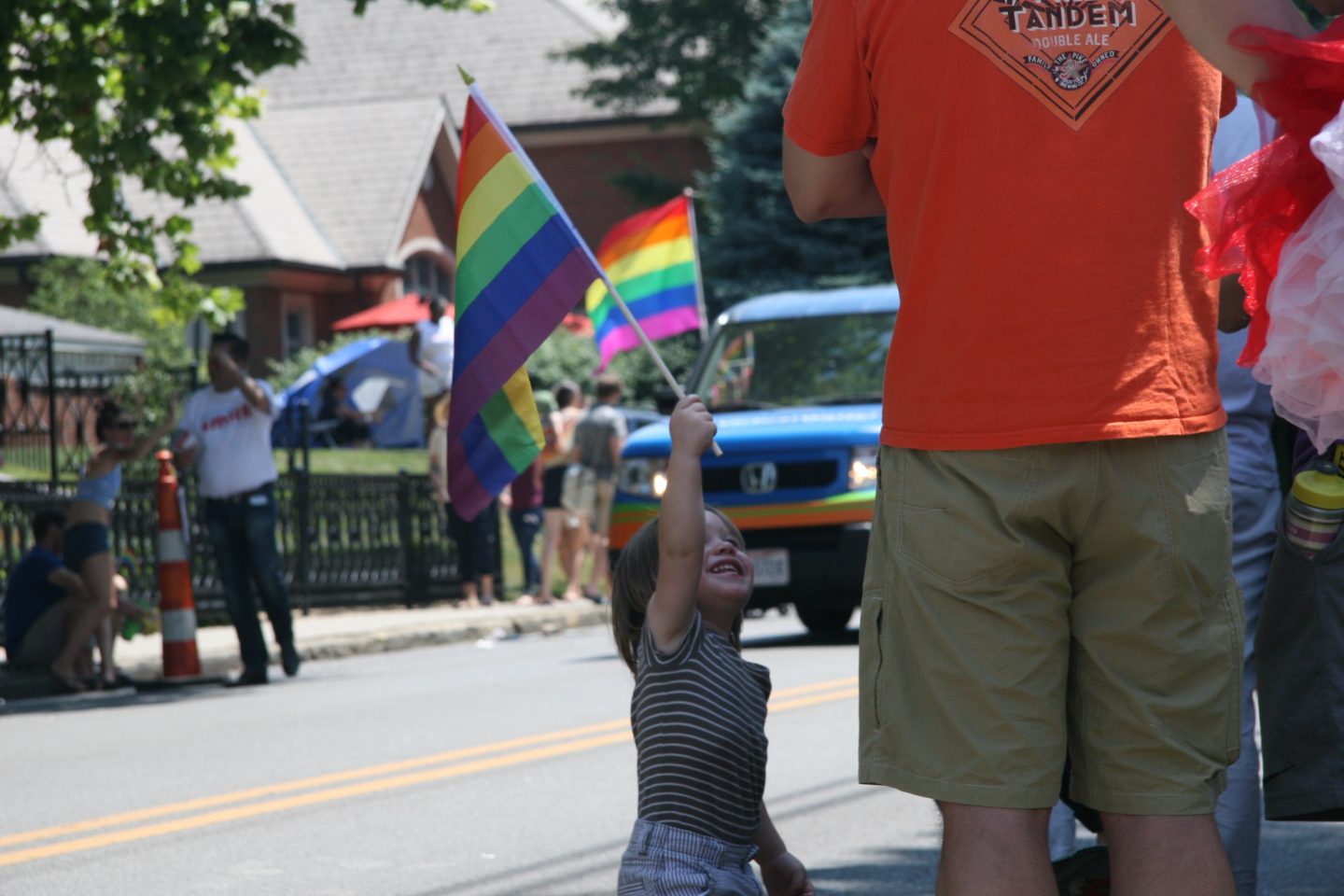 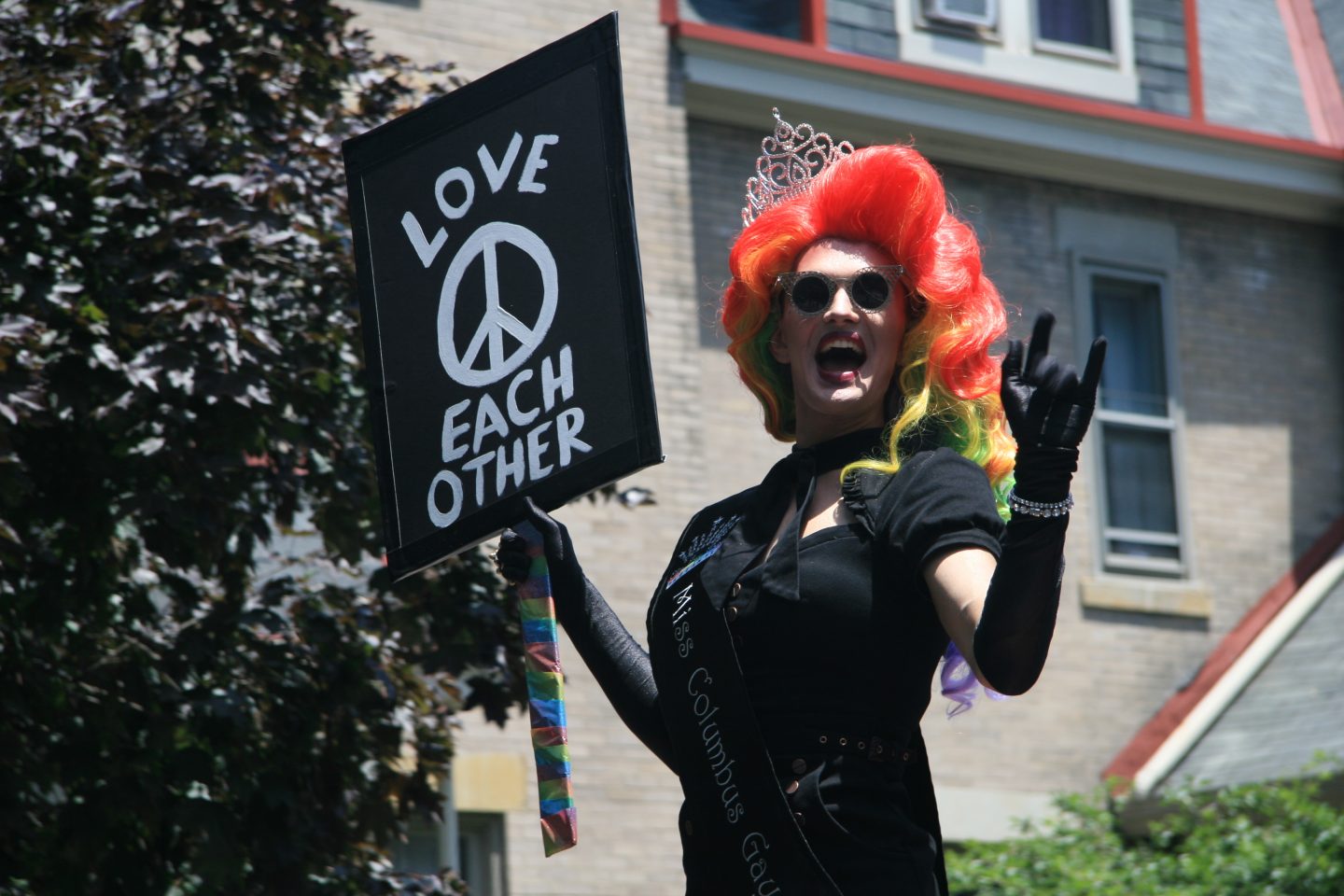 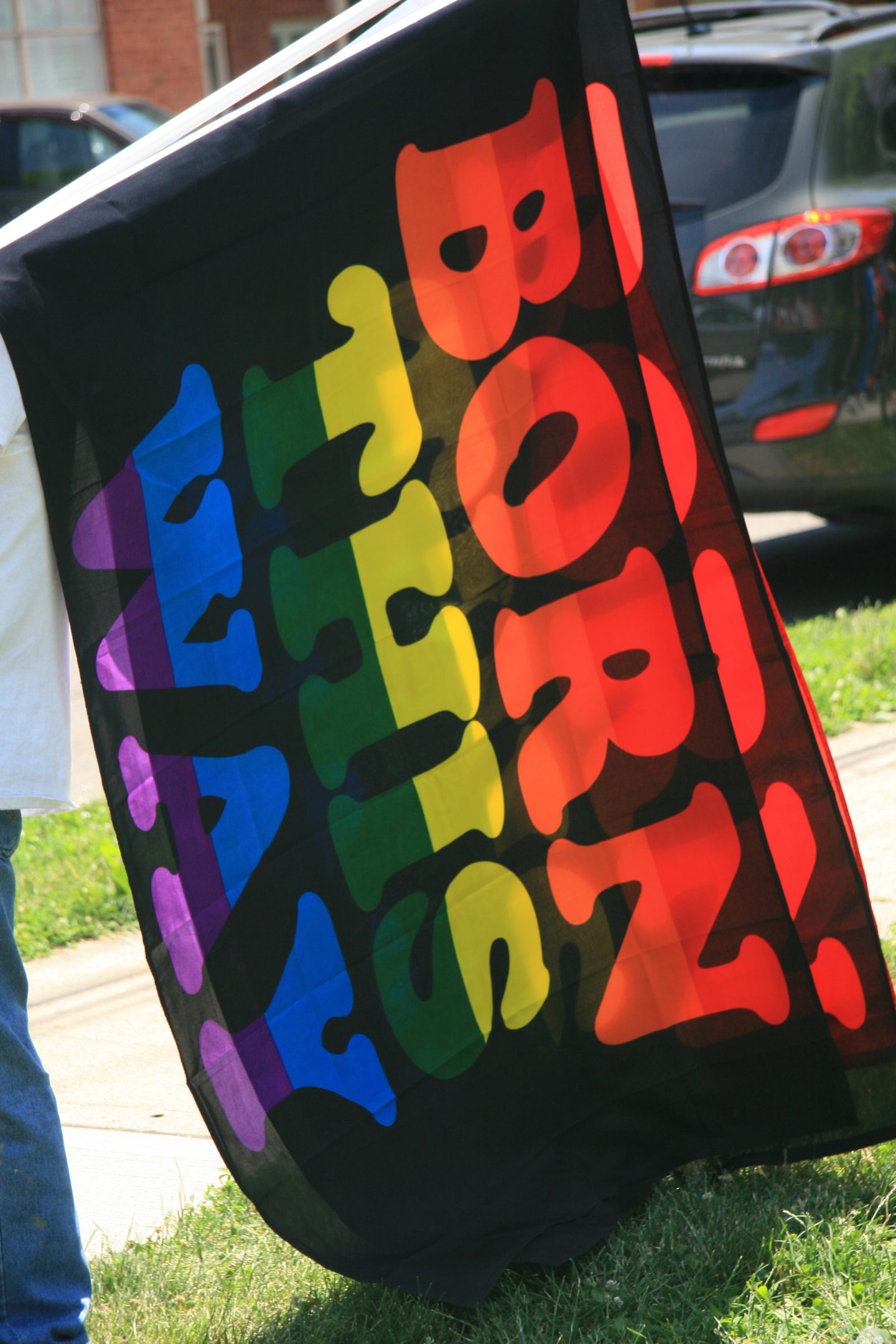 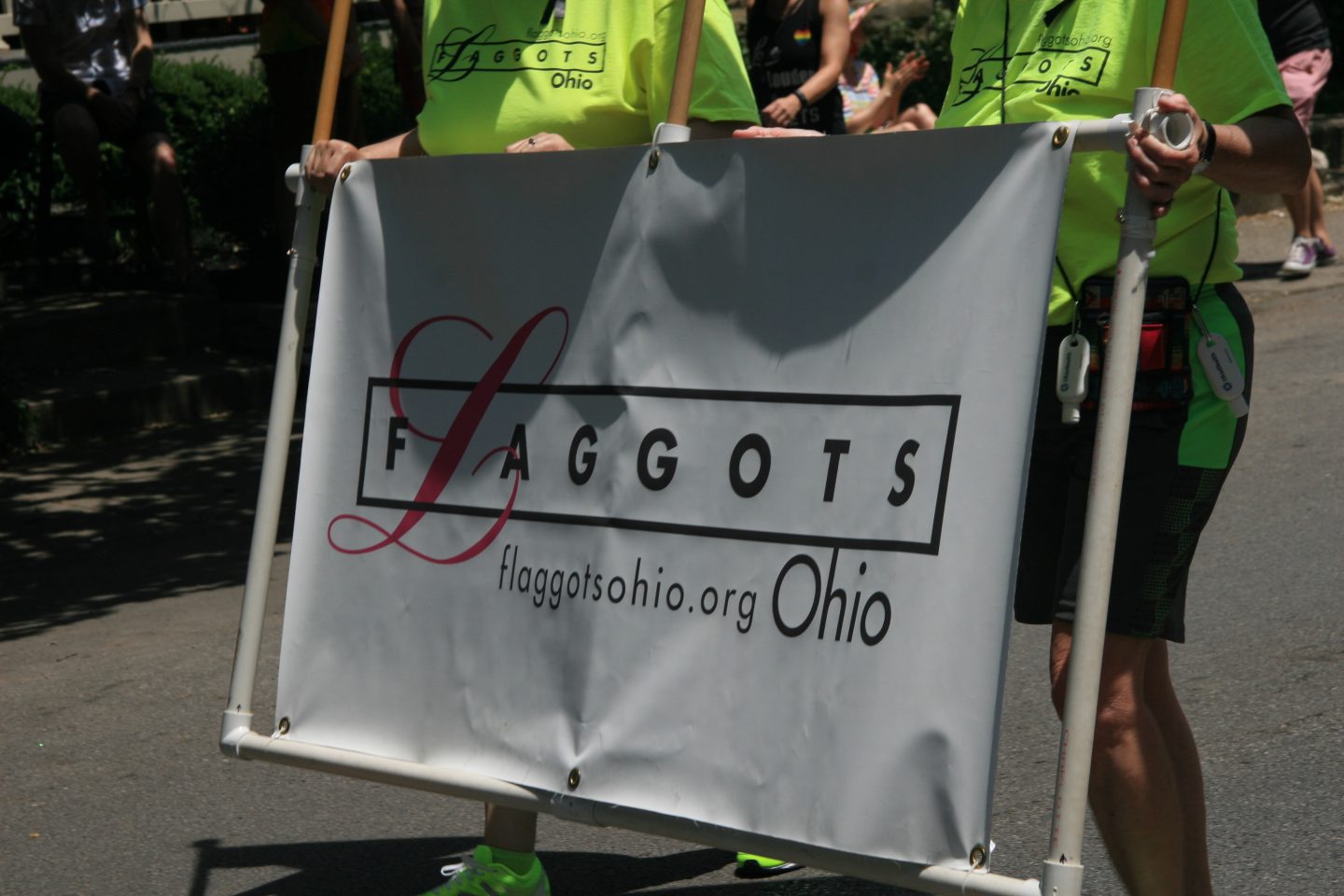 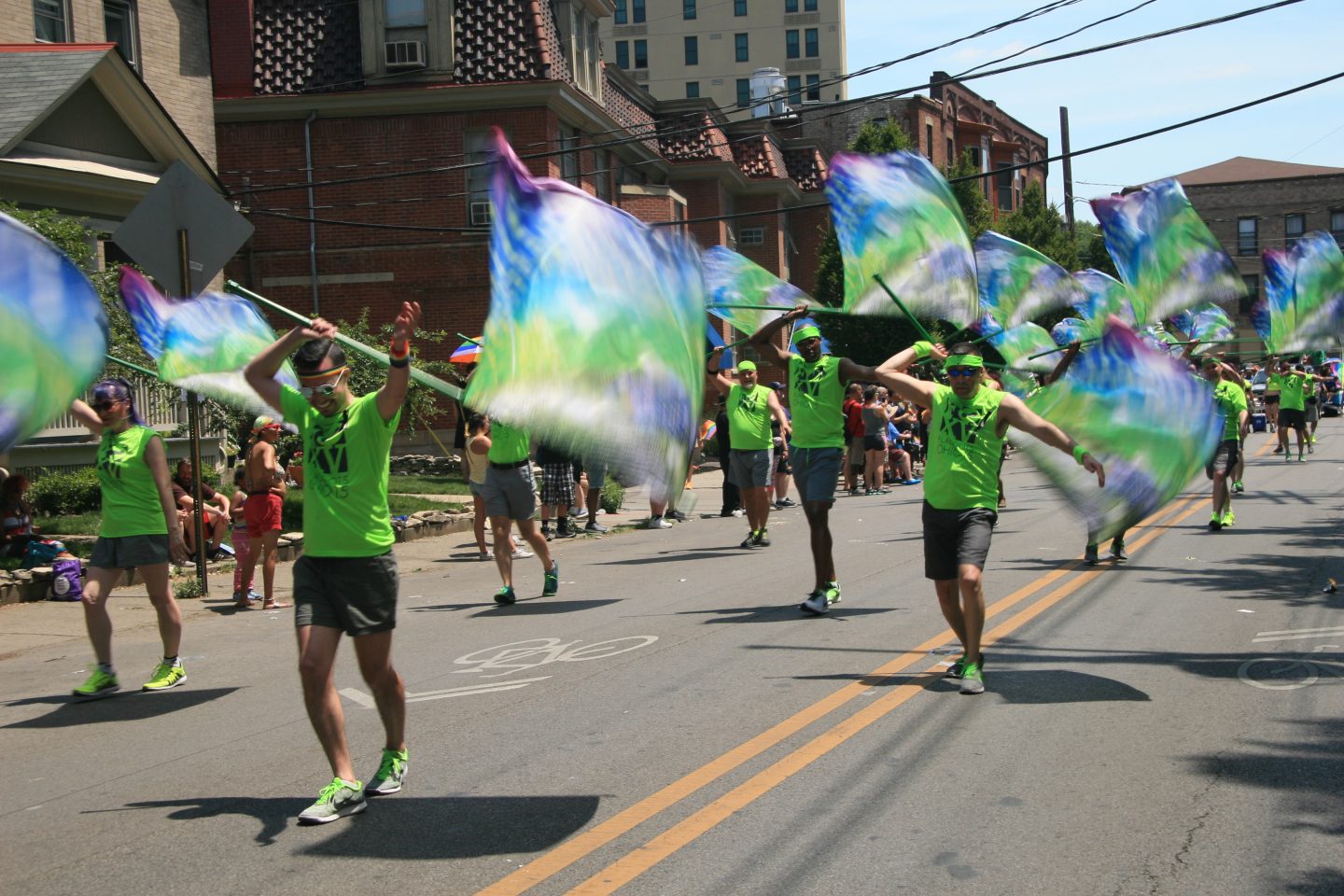 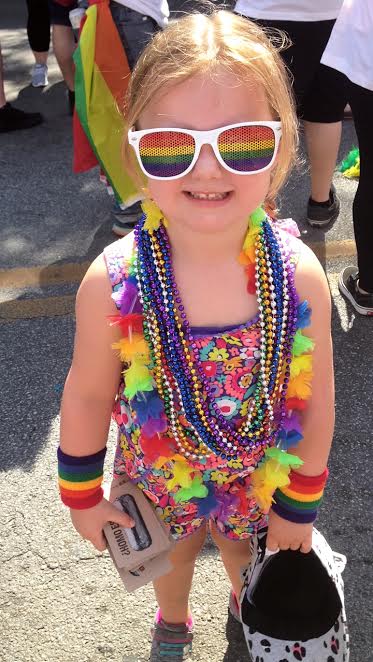 She’s so cool and she doesn’t even know it.