Dear Lifestyles, PromoWest, LC, Express Live…. (do any of us know the actual name anymore?)

I have been attending concerts within your walls and on your lawn since the day you opened. As you have gone through several identity crisis, I have remained a loyal and supportive patron. Countless concerts. I can’t begin to name all of the bands I have seen come across your stages. I’m 33, at one point I used my fake I.D. to secure my concert buzz as I probably did “obnoxiously” dance. I don’t even want to try to count the money I have spent on your overpriced beer through out the years.

I have never in more than 20 years of attending concerts ever been scolded, harassed, or treated like such garbage as I was last night at the Switchfoot & Lifehouse show, I can assure you, I am not an “obnoxious” patron that needs to be continually scolded.

I was told several times that for fear of my safety, I was not allowed to stand-up in front of the chairs in the designated box/VIP area. Let me first state I can remember countless times I was slammed up against that very railing for a sold out show. Also, do you remember when the child fell in the gorilla pit at the Cincinnati Zoo? If you legitimately fear for people’s safety, as I imagine it is not just mine you solely fear for. If you are that concerned some drunk, over excited concert goer is going to actually flip over the railing into the unsuspecting crowd below….. why don’t you be proactive and fix this problem? Why not avoid a catastrophe and cut out of the Express Live job description, harassing people for standing and dancing at a concert? Shocking concept I know.

I also just want to point out, I was sitting in the Germain box but I am not a Germain. I am really nobody important, but that all depends on who you ask. I would have loved to see the repercussions of my sweet little security guard getting in the face of the real Mr. Germain. Will the real Mr. Germain, please stand up! The point is, as an employee of Express Live it must be hard to know who is who sitting in those boxes, so why be rude?

Case in point: I was seated in the box seats and in comes a young guy from the back steps. I took one look at him and knew he was in Switchfoot, had just been on stage and had popped up to catch some of the Lifehouse show. I leaned over to him and said,

“Awesome show! I just want you to know that I do not care if you sit here, but there are two girls in blue who are going to care very much.”

Call me psychic or crazy but less than a minute later here come two very serious coeds in their blue security shirts, immediately approached my neighbor and began quizzing him on why he was up there, where he had come from and did he know you have to have special tickets to get up here? He could not sit there!

I literally laughed and pointed out, he was from the band, you know Switchfoot, the one that just got off stage! I was met with looks of horror and shock as they realized they had harassed the wrong patron. I guess those are the chances you take when you feel like your Security t-shirt gives you the right to steal harmless people’s fun! They quietly disappeared and so did he.

There were two women sitting at the bar portion of the VIP, located directly behind the seats. The older Mother who was clearly a HUGE fan moved down from her bar stool, to the seat in front of her for a better view to take some videos. She was not standing, she was seated. She was not being disruptive and nobody had sat there the entire show, it was an empty seat. Then along came the girls in blue, to let her know she needed to move out of the chair. There was absolutely no reason for it. We are talking about a matter of a couple feet, in a completely empty section. Simply because they had the power to.

If you have SO much staff working  that they literally have nothing better to do than to go around and harass innocent people sitting on their phones, trying to video a concert…. do I really need to further explain this?

Did it end there? Of course not!

I was standing in the wrong place again. I was actually standing exactly where I had tickets for, but I wasn’t allowed to stand there, so I was standing further back. For absolutely no reason here come my friends again, and this time they put their hands on me and called me names. I moved back to oblige them and because I am beyond annoyed at having two girls lodged in my ass all night for no reason, I just move so they will hopefully go away. As I point out that literally nothing is different from the last 45 minutes I have been standing here until now, the taller of the two girls, pushes herself right up against my back and crosses her arms defiantly. I state again, I have done what you asked me, I have moved, I am standing exactly where you want me to stand, so can you please leave me alone? At this point the defiant diva behind me states as snotty teenagers do, “You have been beyond obnoxious all night! I will stand right here all night if I want to!!!”

I can see the immaturity seething from her mouth and think to myself, then stand right behind me all night, your prerogative. I turn back to the concert, and go about my usual self, except every time I move or even take a breath I have to touch the predator because she is literally that close to me. She looses interest after 10 minutes or maybe after 10 minutes of realizing I’m literally doing nothing but standing there, because I am not even swaying to the music at this point.

Then we left because who could possibly have fun in such an oppressive, harassing and negative environment!

I want to conclude with this, I understand why we need to have rules and security. In today’s world you can’t even be guaranteed your safety at a concert. Some unstable person could bring in a gun, a terrorist could be having a bad day, we have all read the headlines and understand why there needs to be restrictions in place. With that being said, I am ALL for getting us in the building safely. Search me, pat me down, look in my purse, please be thorough about it, so we are all safe! Check my I.D., slap the proper wrist-band on my wrist and send me on way. There is no reason that such an intensity needs to be carried over into an almost empty VIP area. I am talking maybe 10-15 people in a space that holds hundreds. One single person could have been in charge of the entire area and still would have been bored. So when you have two very young girls, who take their job so seriously that they are hell-bent on ruining someone else’s night over a very minor detail, you need to re-examine your staff and whether they are meeting the values of your companies mission statement. 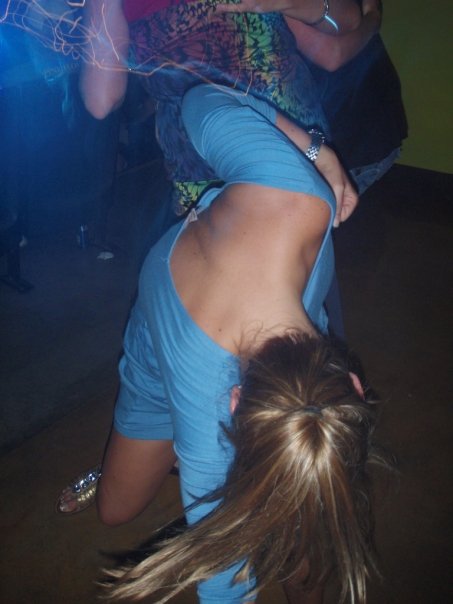 What’s so wrong with getting down and playing air guitar?