No, this is not the Jungle Jim’s Market blog post that I promised would be posted on Tuesday following the Butler County Donut Trail post. Yes it’s Sunday, and I know I have not posted anything since Monday. My head space has not been the best this week, to say the least.

When I woke up Monday I reached for my phone as I usually do, I’m still always shocked when my internal alarm clock wakes me before the 4-year-old. The very first thing I saw was a, “Pray for Vegas,” post. My heart sank, I had no clue what had happened but these “Pray for….” posts have become so frequent I already knew it wasn’t good.

I got up, turned the TV to CNN and immediately wished I had just stayed in bed.

Another mass shooting at the hands of a white, middle class, male. More innocent lives lost. More families whose lives will never be the same. Another day in History where we will recall horrific events. I cried. I’ve been crying all week. I haven’t watched CNN, my favorite channel, since Tuesday because I literally can’t anymore.

I’d like to say I don’t internalize these events, but I do. I go through the stages of grief, every time something like this happens. Denial, anger, bargaining, depression and acceptance. I don’t think any of us can deny what is happening in this Country, and it’s not the World because no other Country suffers even close to the number of deaths because of guns as the US does. I get very caught up in my anger. I’m angry, very angry and I’m also very fearful for my own safety and that of my daughter’s. My goal was not to make this a politically rooted post so I’ll stop there. You can also check out my Twitter or Instagram stories {@acityexplored} where I spend more time-sharing my opinions on gun control and politics. You can just go ahead and assume I no longer give a single shit about your 2nd Amendment rights, so if that offends you, guess what, I DON’T CARE! Your 2nd Amendment rights are infringing on my daughter and I’s ability to live safely and without fear.

After my anger comes the depression. This sinking, black hole that overtakes me and leaves me feeling empty. Nothing I do will help, our Country is going to hell in a hand basket, should I ever let me daughter out of the house? Should I even want to bring more children into this screwed up World? I literally grapple with the depression of our Country’s continuous denial that now is not the time for the gun control conversation. Yesterday, UA High School, where Evelyn will one day attend, was on lock-down for a gun threat. One community over a student brought a gun to a Worthington school. Oh and also, there was a man at Children’s Hospital videoing himself carrying around a gun, a Hospital were sick kids who already won the shit lottery of life are treated. I can’t even let those thoughts fester in my head, but clearly they are in the head of men who think it’s their God-given right to tote deadly weapons. It hasn’t even been one week since Vegas, so for everyone that believes this will never happen to them or their children, I just can’t be dumb enough to believe that anymore. I don’t think a single parent from Sandy Hook or Vegas thought their innocent baby would be gunned down by a white, middle class, American terrorist.

It’s been a long week. My head has been so many places but not on this blog. I haven’t written anything all week because every time I do it comes out as ^^^ has a strong political under current and is basically a run-on, vomit sentence about gun laws. I don’t want to make this a political space but I can’t keep sitting idly by, not at least trying to do my small part to help this Nation facilitate a huge, necessary change.

For the sake of trying to stay positive, see the good in people and the beauty of this world, let’s swing a hard Louie and jump back into my Butler County adventure. There will be a GIVEAWAY Monday and then we will resume the Butler County adventure with my recap of Jungle Jim’s Market. Tonight, I want to share one of my favorite things we experienced in Butler County, Pyramid Hill Sculpture Park & Museum, which also just welcomed the world-renowned, outdoor art installation, Intrude by Amanda Parer which will be on display for the first time in the Midwest, October 6-15th. 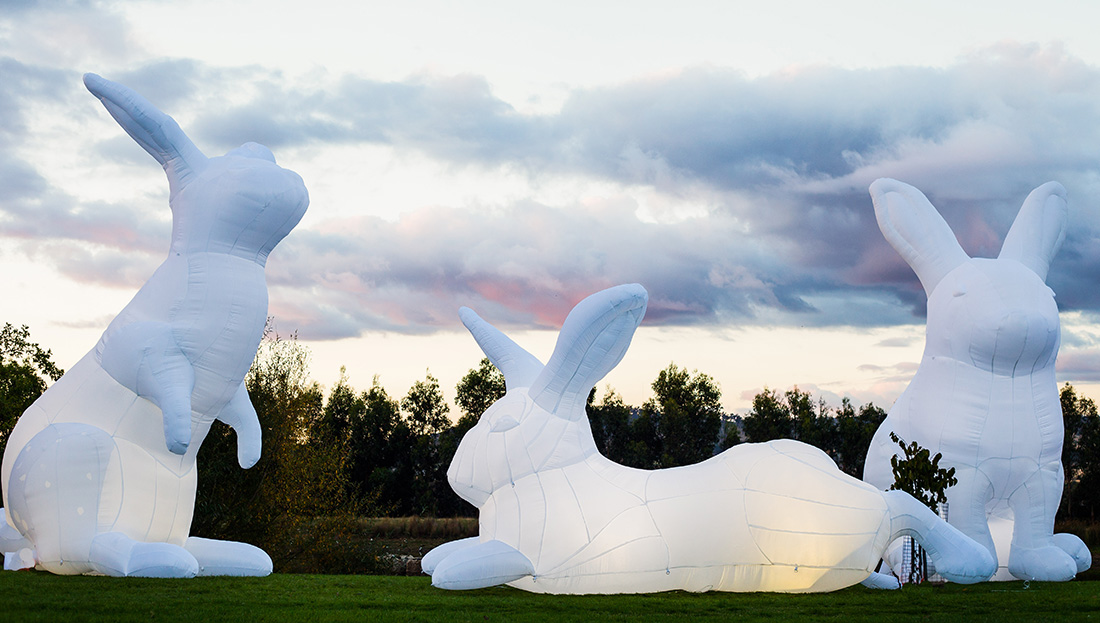 Intrude, one of the most highly acclaimed major public art installations in the world, will make its Midwest debut this October at Pyramid Hill. This imaginative piece was created by Australian artist Amanda Parer in 2014 and has since been seen on four continents, in over 50 cities by over a million people.

Intrude is a spectacle-sized work consisting of five giant illuminated rabbits—the largest over 23 feet tall. Rabbits in Parer’s native Australia are out of control pests, but also represent the fairy tale animal from our childhood. Intrude deliberately evokes this image to lure you into the artwork only to reveal the more serious environmental messages behind it. Exciting programs have been developed to attract knowledge and experience seekers alike. The park will have a Hoppy Hour, a Hip Hop Night, a bunny-themed art exhibit by local artists, bunny-themed crafts for children, hat making workshops with a Hollywood costume designer, Mad Hatter themed tea party and more.

Two of the bunnies will complete their Midwest appearance at the Blink Festival from October 12-15. The only way to see the show in its entirety is at Pyramid Hill, October 6 – 11.

Join us on opening night for an exciting celebration of all things Intrude!

The Hollywood costume maker who created the hats in the first Hunger Games film will teach hat making workshops for makers at all skill levels. A workshop for children 6 – 12 is free with park admission. Adult (12+up) classes will be offered at the beginners, intermediate and advanced levels for $25.  Additional information here.

Show off your newly created hat or dazzle in a hat from your personal collection at this mad hatter themed tea party.

The October and November exhibit in our Museum Gallery will feature local and regional artists working with bunny imagery. 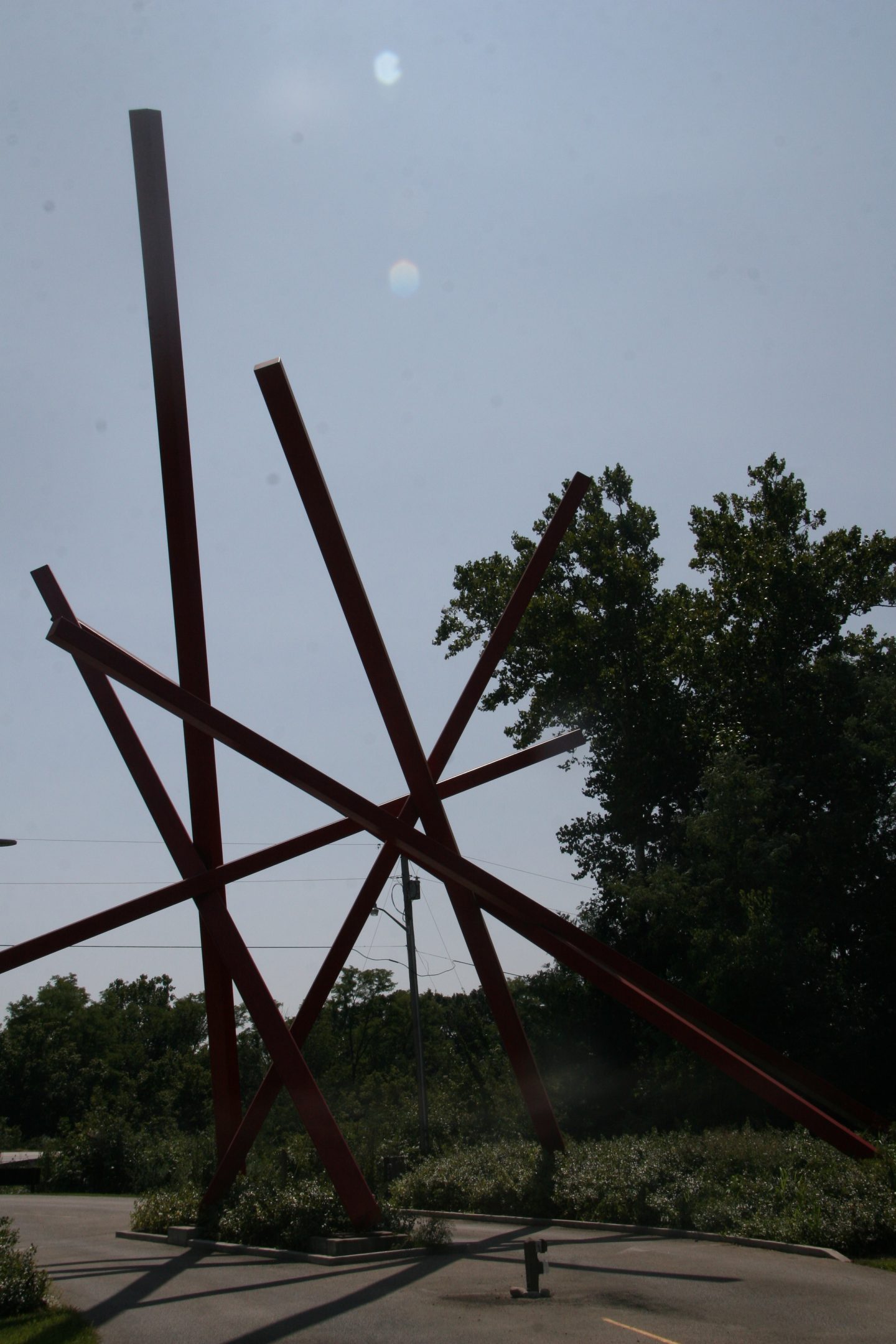 Pyramid Hill is a 300+ acre sculpture park with 60+ monumental outdoor sculptures displayed in a landscape of rolling hills, meadows, lakes, and hiking trails. The park also features an Ancient Sculpture Museum that displays Greek, Roman, Etruscan, Syrian and Egyptian sculptures dating to 1550 B.C. The Museum Gallery hosts exhibitions by local, regional and national artists. Pyramid Hill is also the only museum you can experience in an Art Cart! Attracting more than 30,000 visitors annually, Pyramid Hill serves as the largest cultural tourist attraction in Butler County. 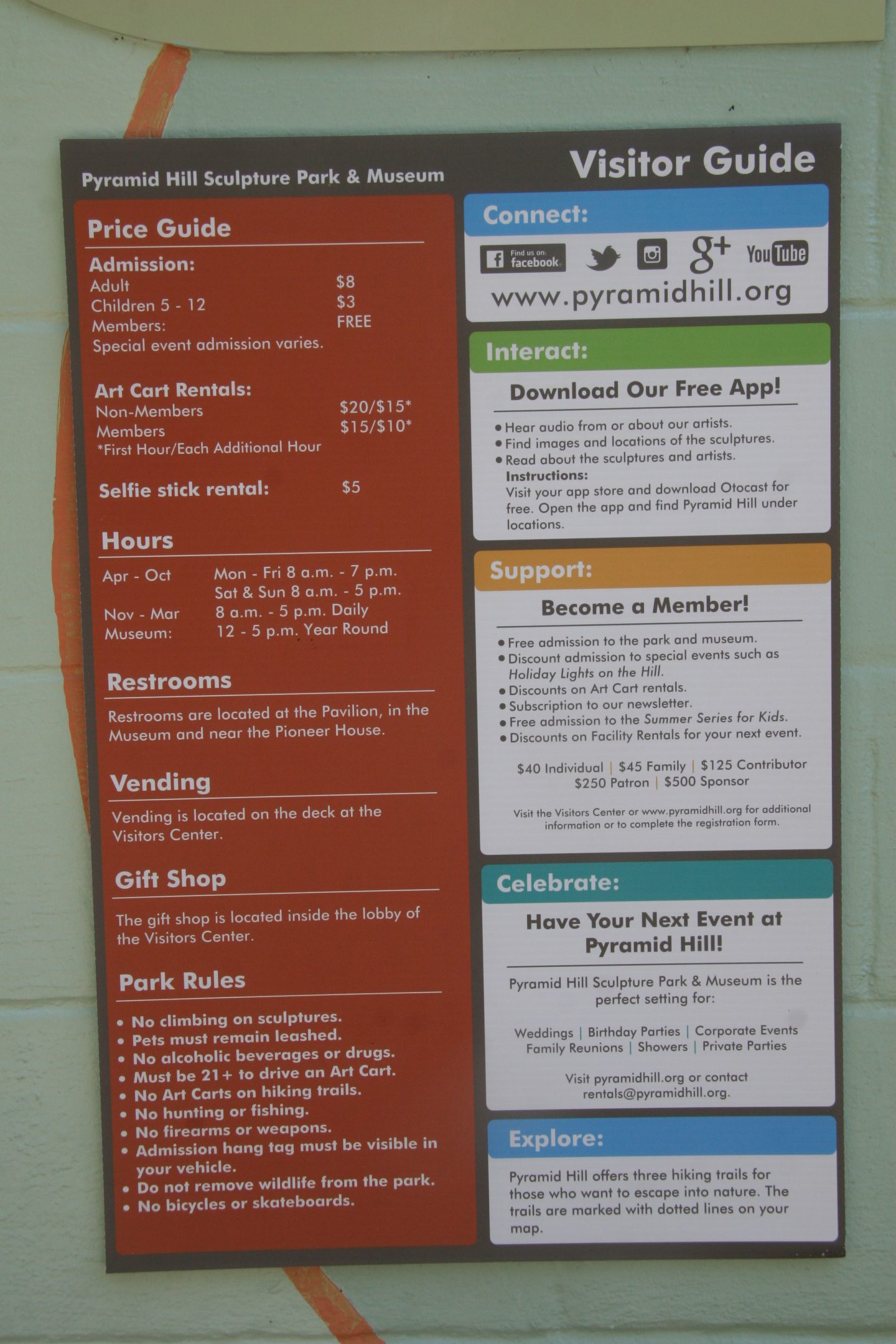 The park is open 365 days a year (weather permitting) and provides summer programs for children and two week-long summer camps, as well as numerous special events throughout the year. Pyramid Hill is known for our popular Holiday Lights on the Hill annual drive-through light display. 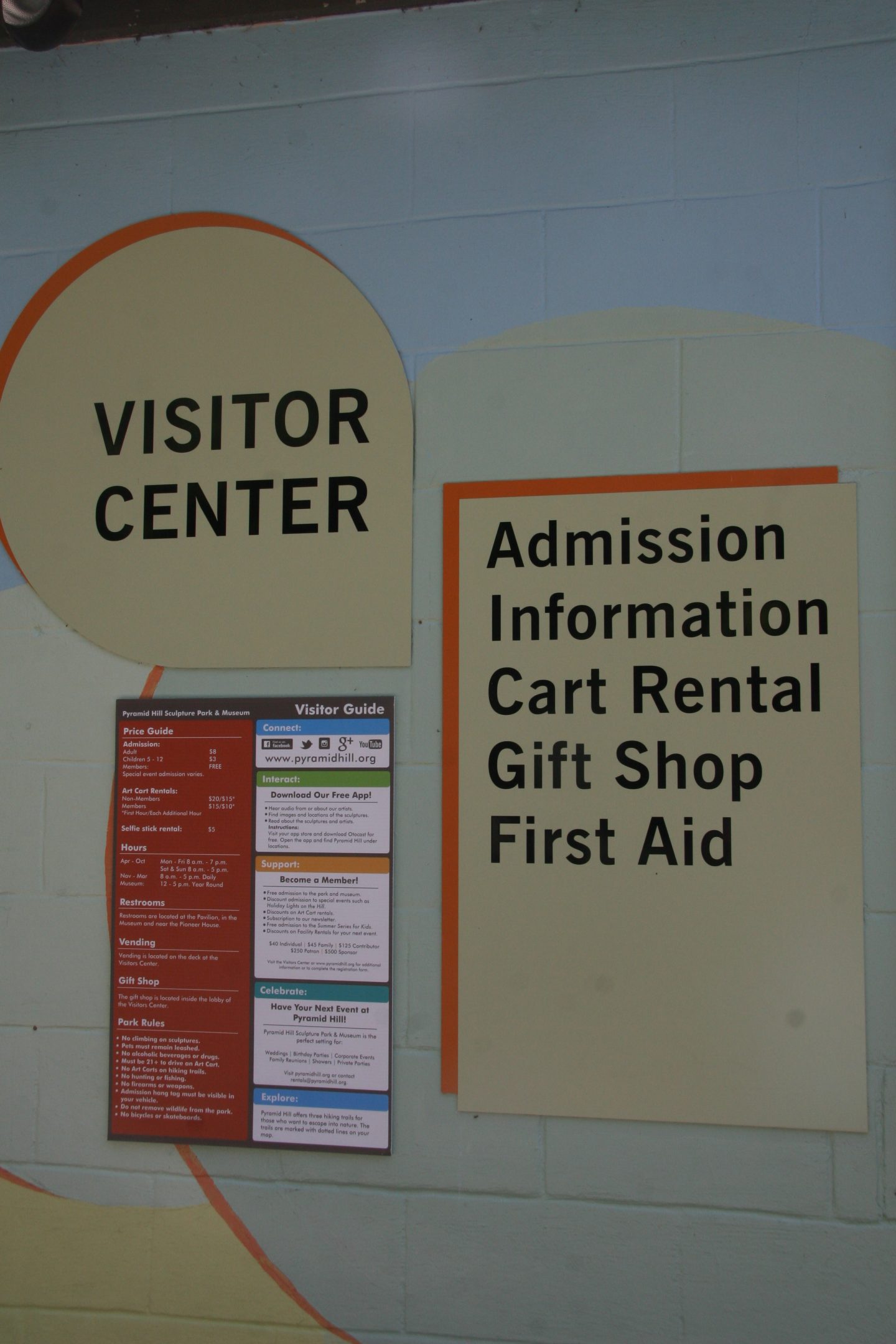 My biggest Pro Tip for enjoying your art adventure, get the Art Cart.

It really is so fun zooming around the vast hills. Unless you want to walk and hike around. But who really wants to walk? Only thing missing from the Art Cart was the Bar Cart! 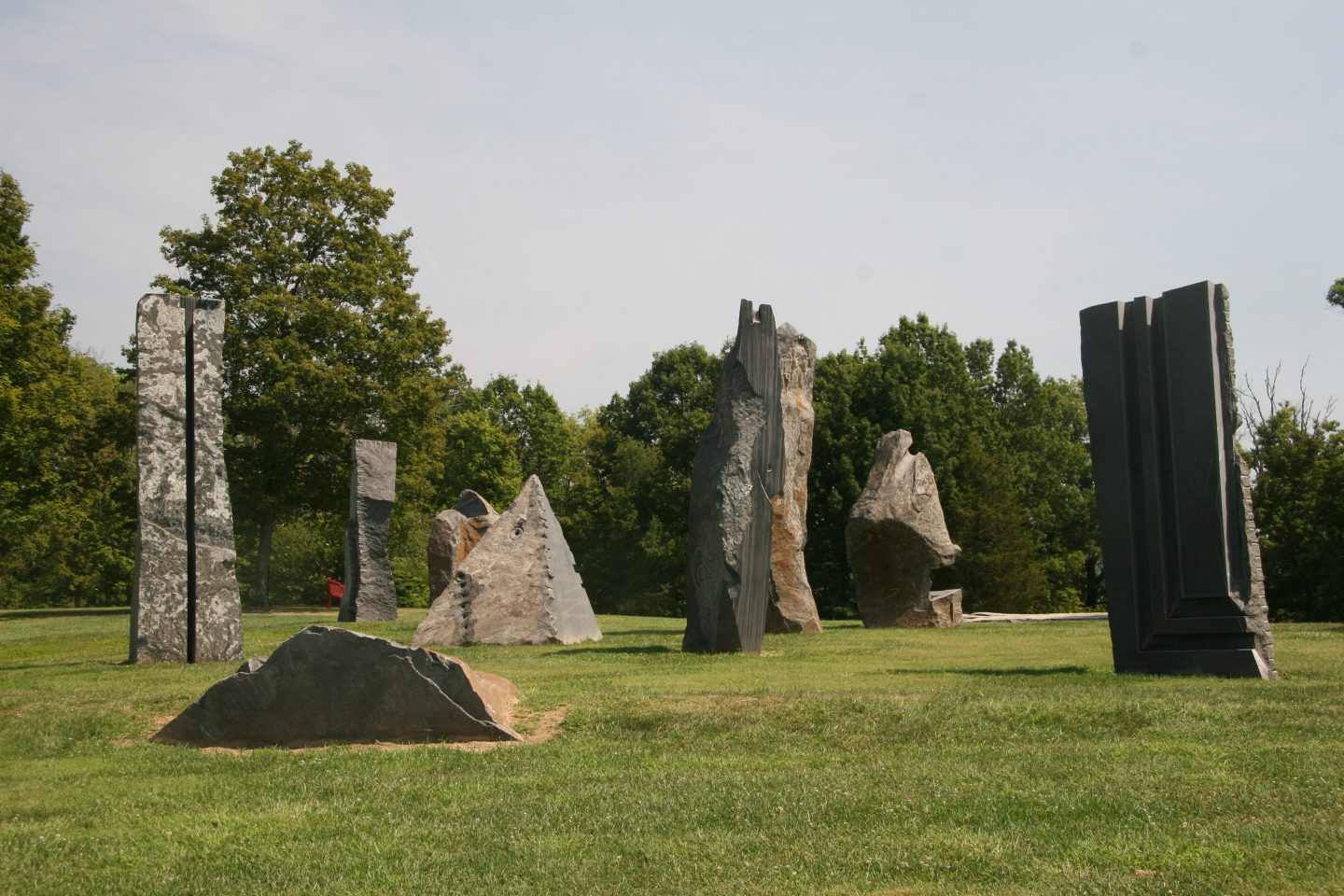 Pyramid Hill began in 1987 when Harry T. Wilks (1925-2014) purchased 40 acres of land right outside of Hamilton. He wanted to build his home there and before it was finished in 1992, he added several adjoining parcels of land. As the land became available be cleared it, built roads, lakes and hiking trails. 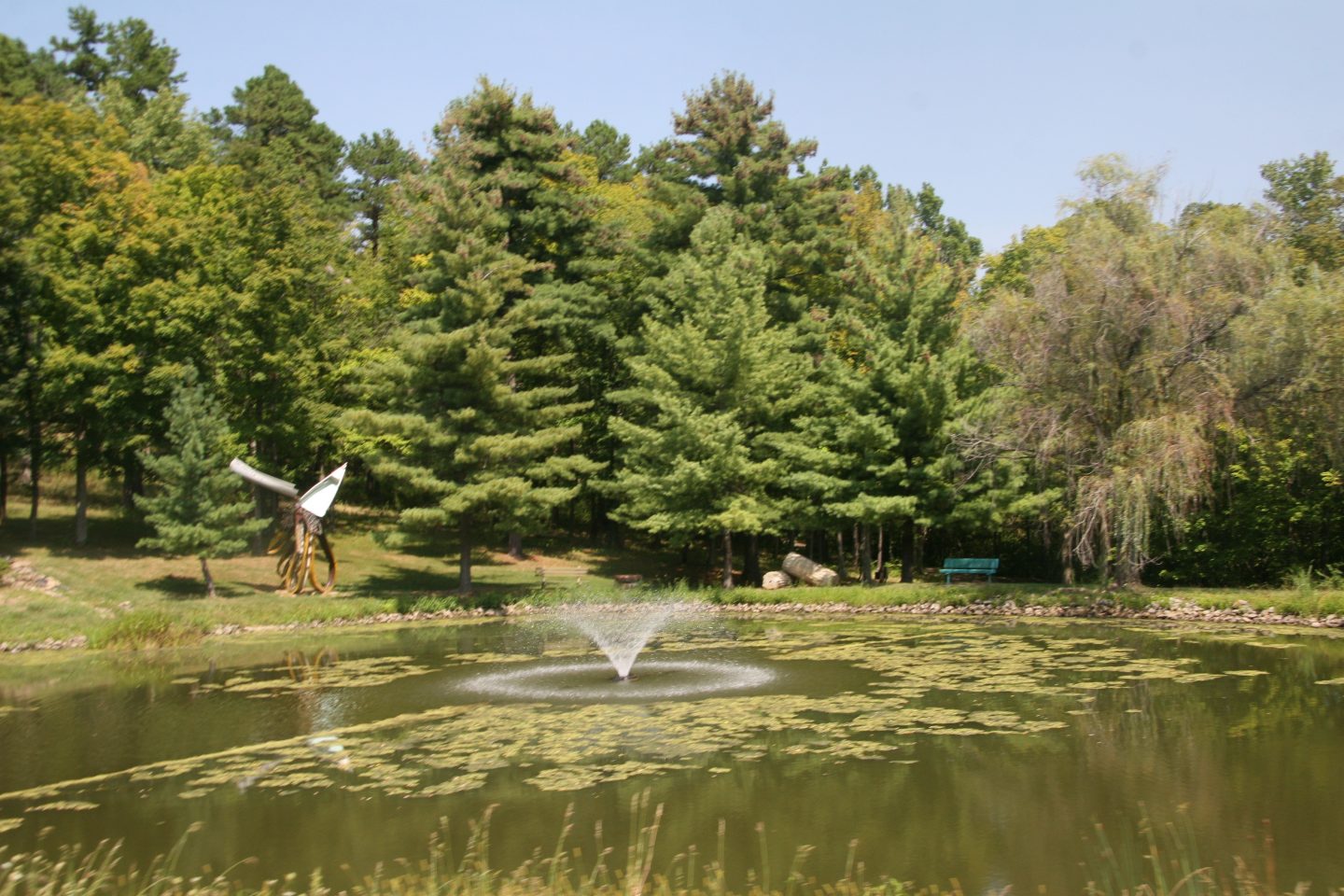 In the Spring of 1996, Pyramid Hill held its grand opening as Wilks formed a non-profit organization and donated all of the land so it could be free from private development.

Since then the park buzzes with activity and has acquired national and international attention. 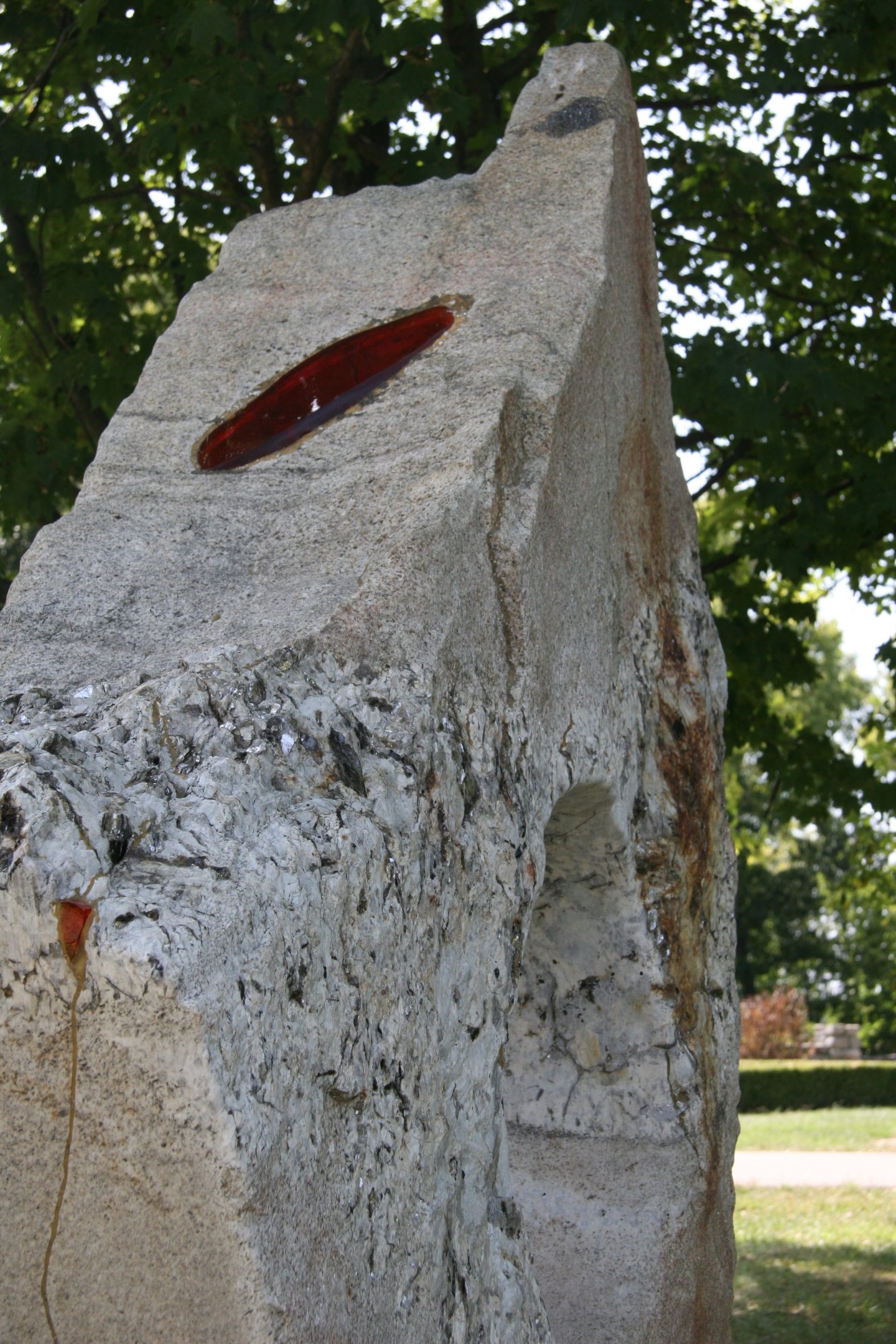 The park is full of unique sculptures with intricate history and details. I absolutely loved visiting Pyramid Hill and am so glad it was a part of our adventure! 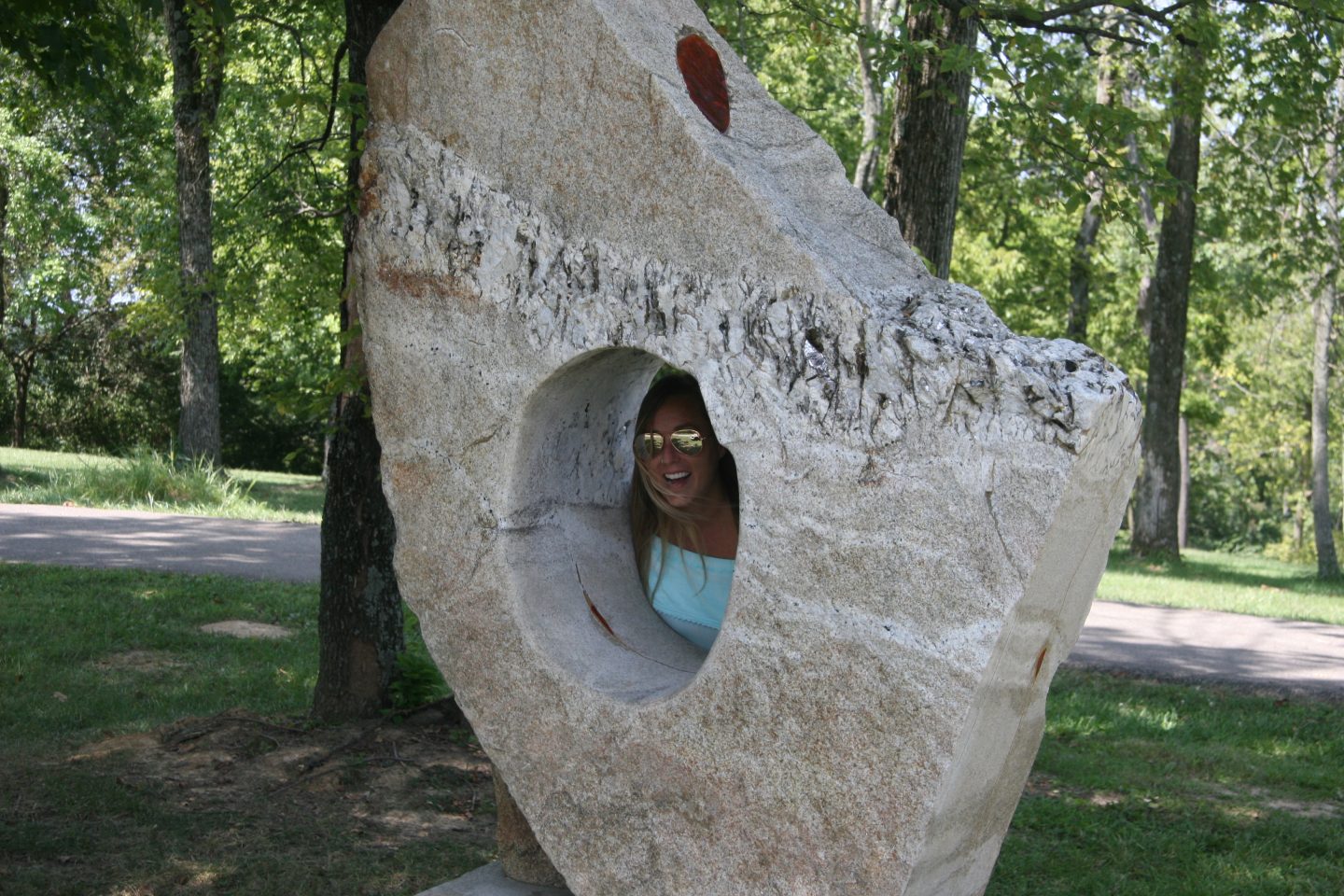 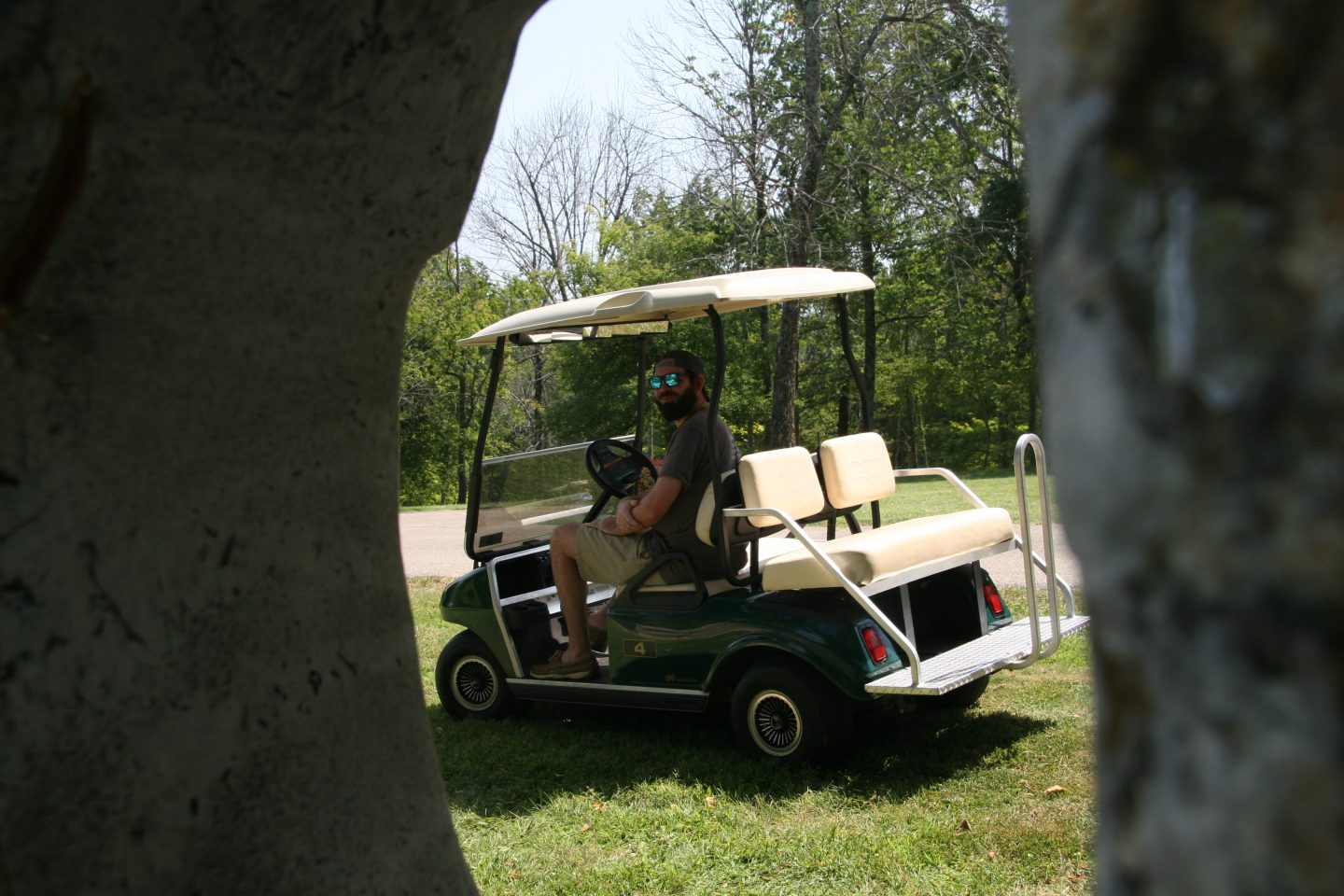 Captain of his Fart Cart. 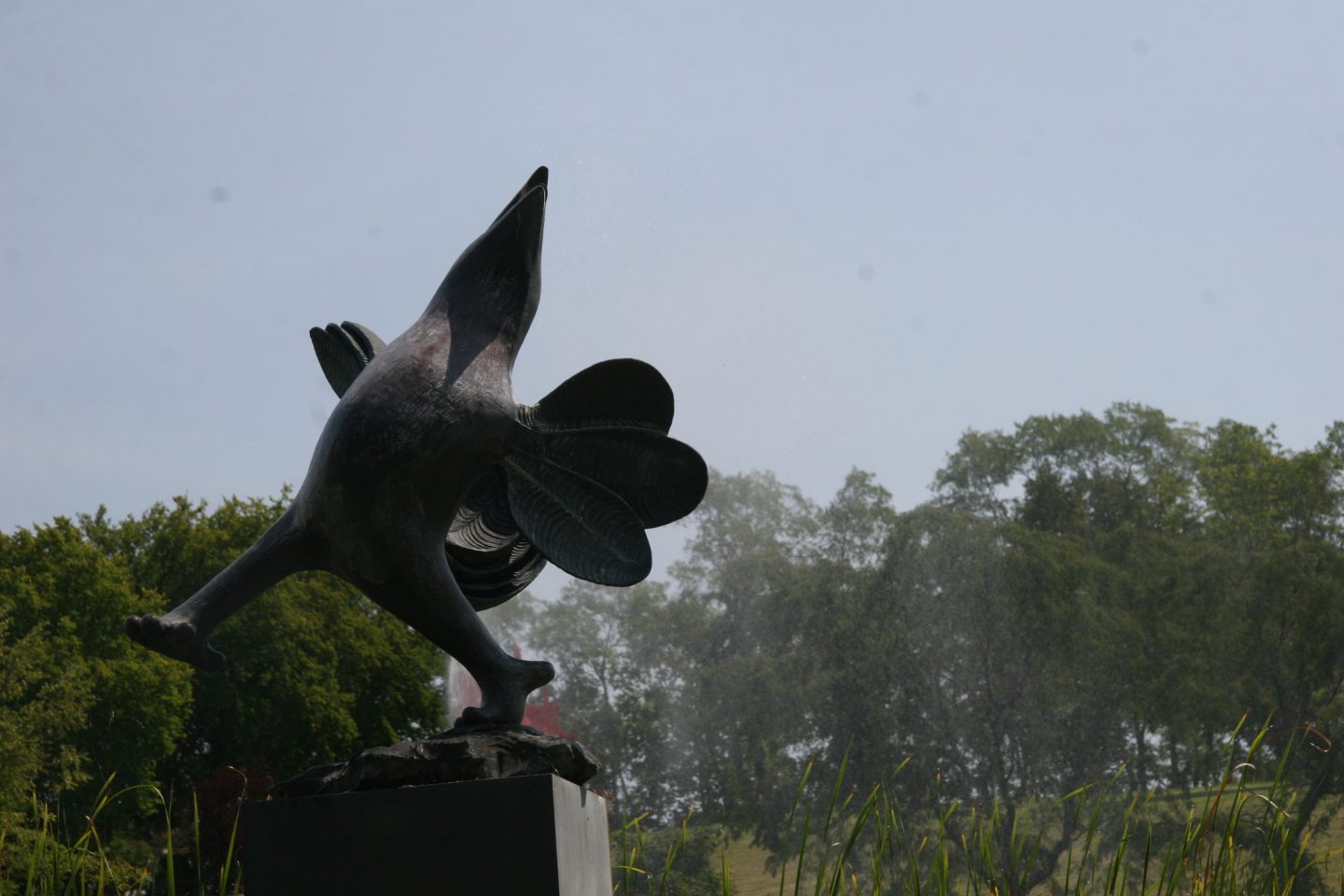 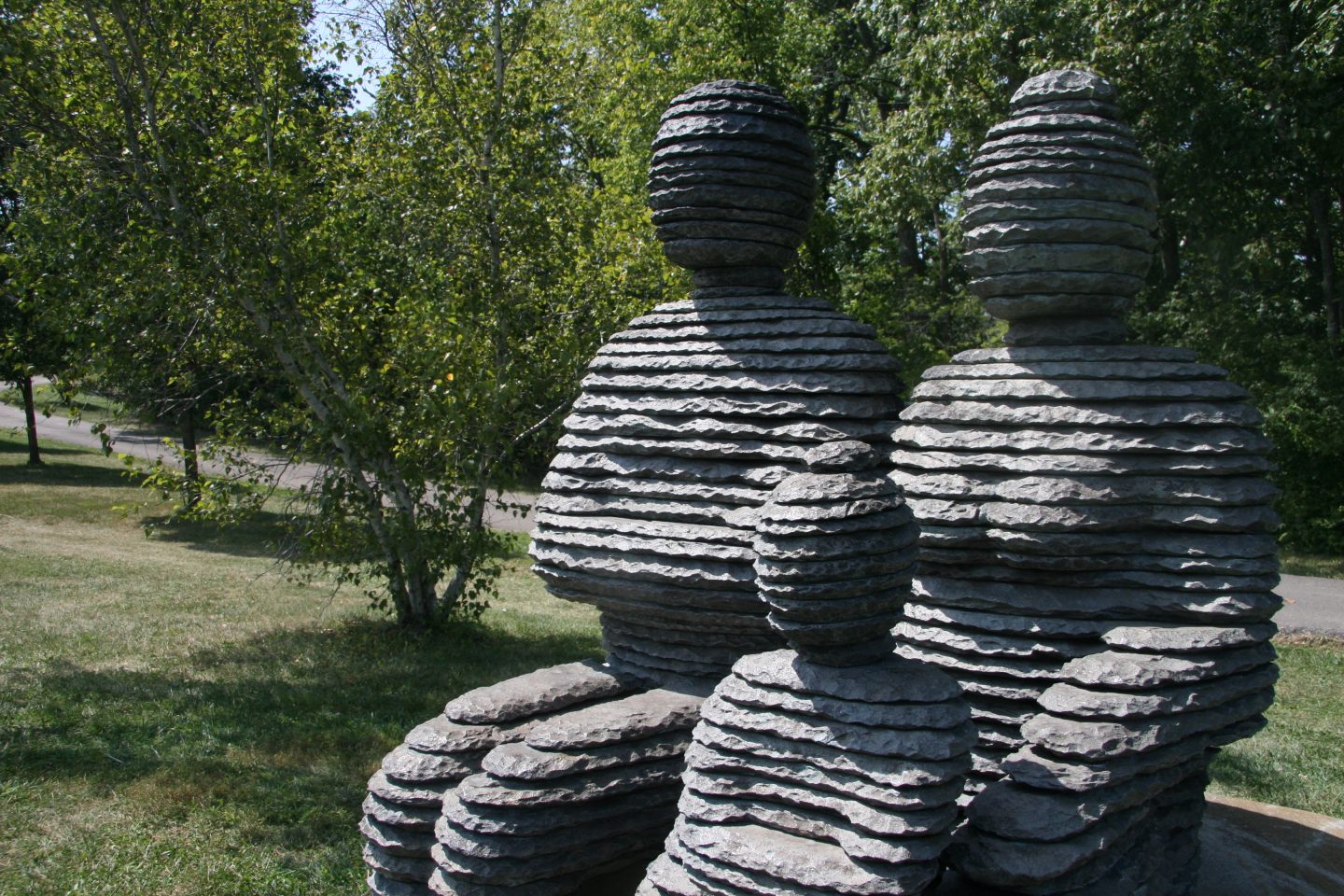 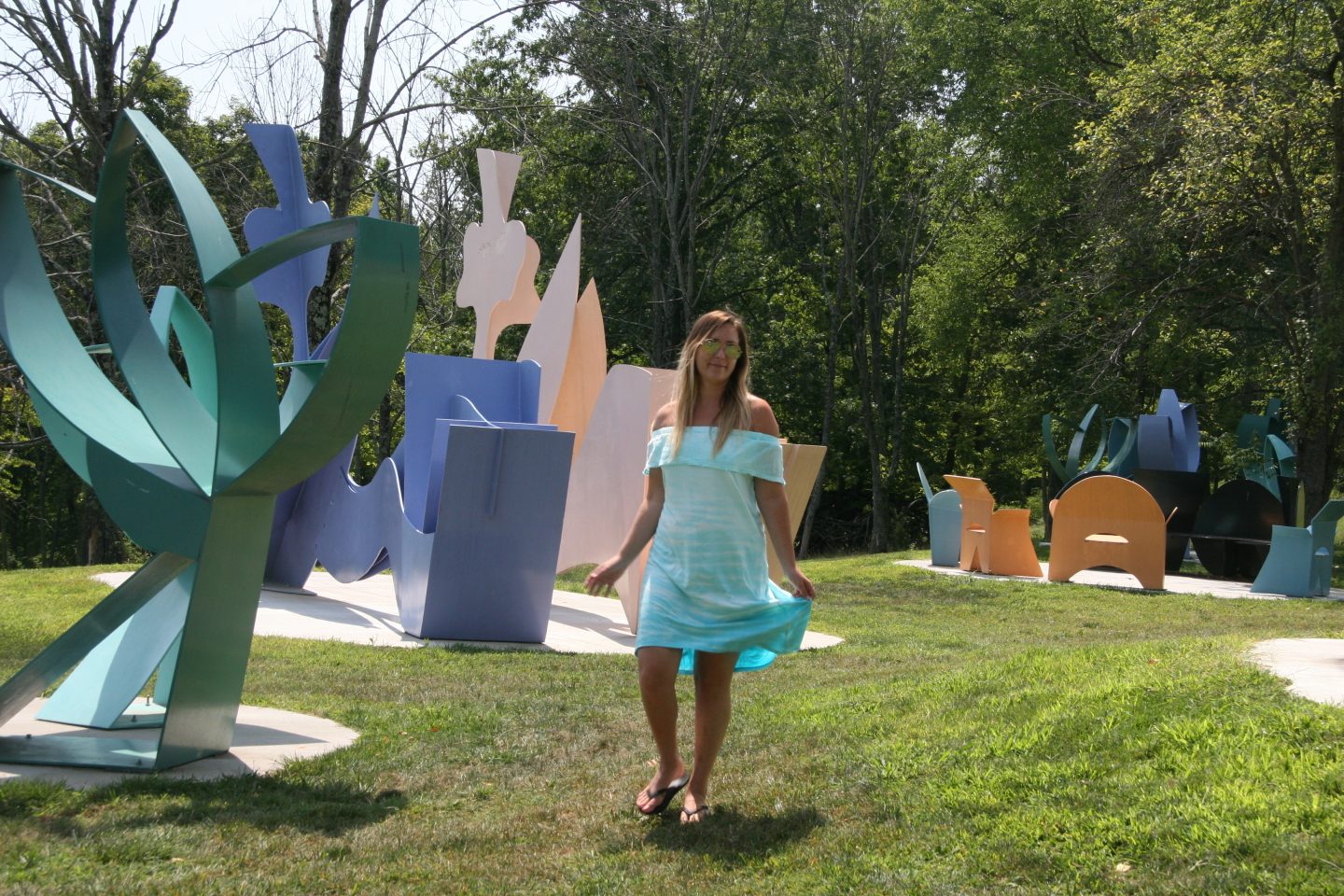 Just frolicking among the art. 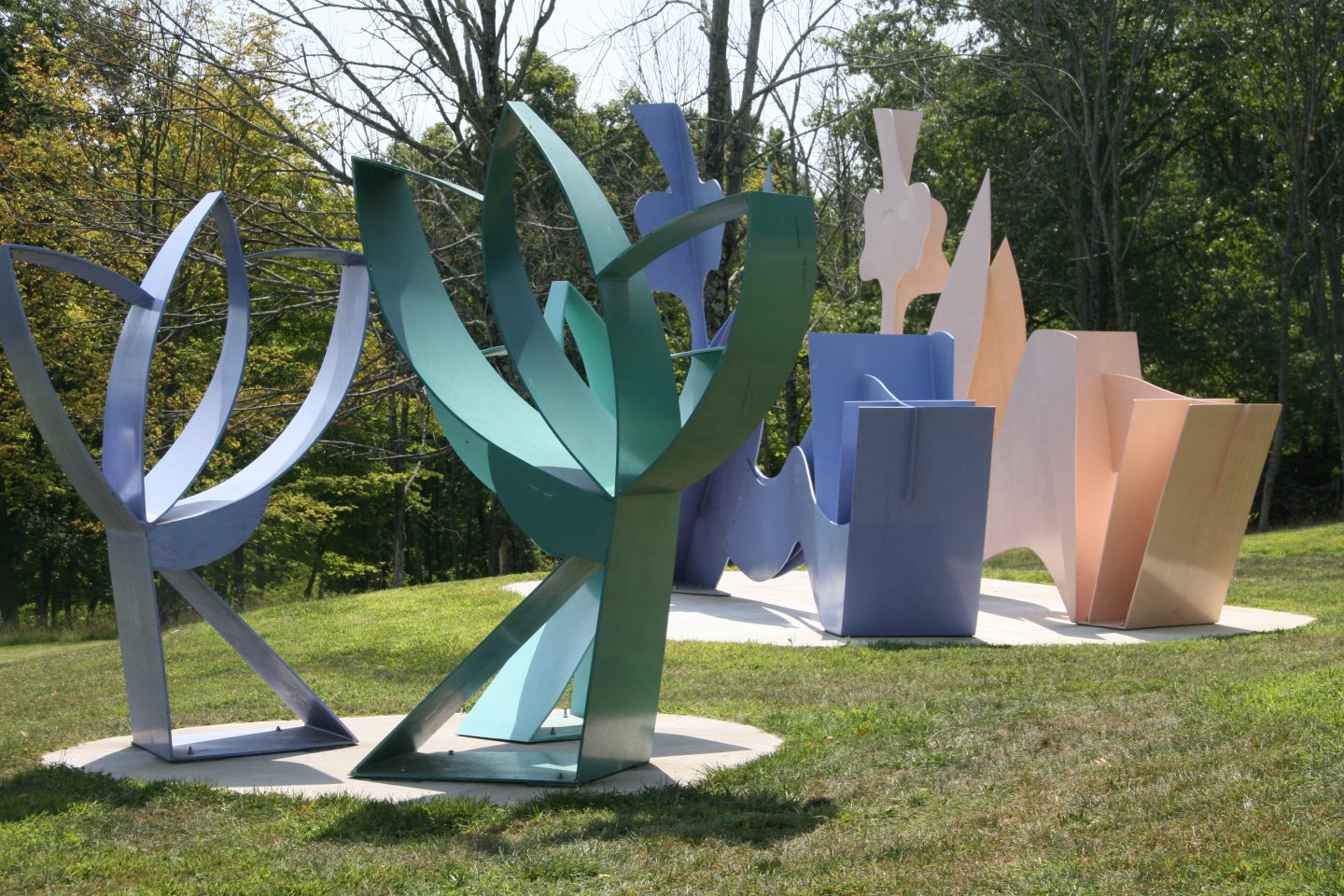 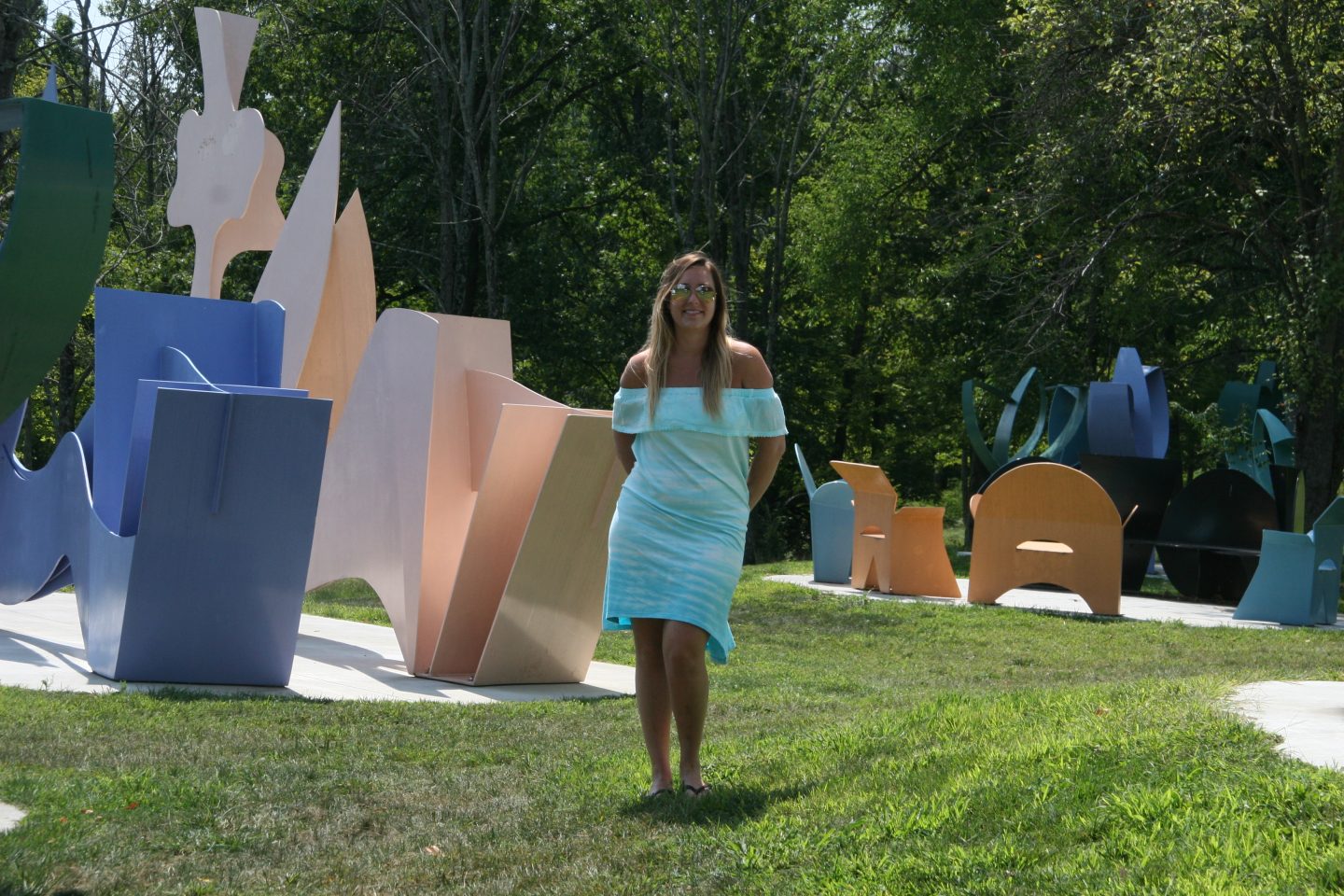 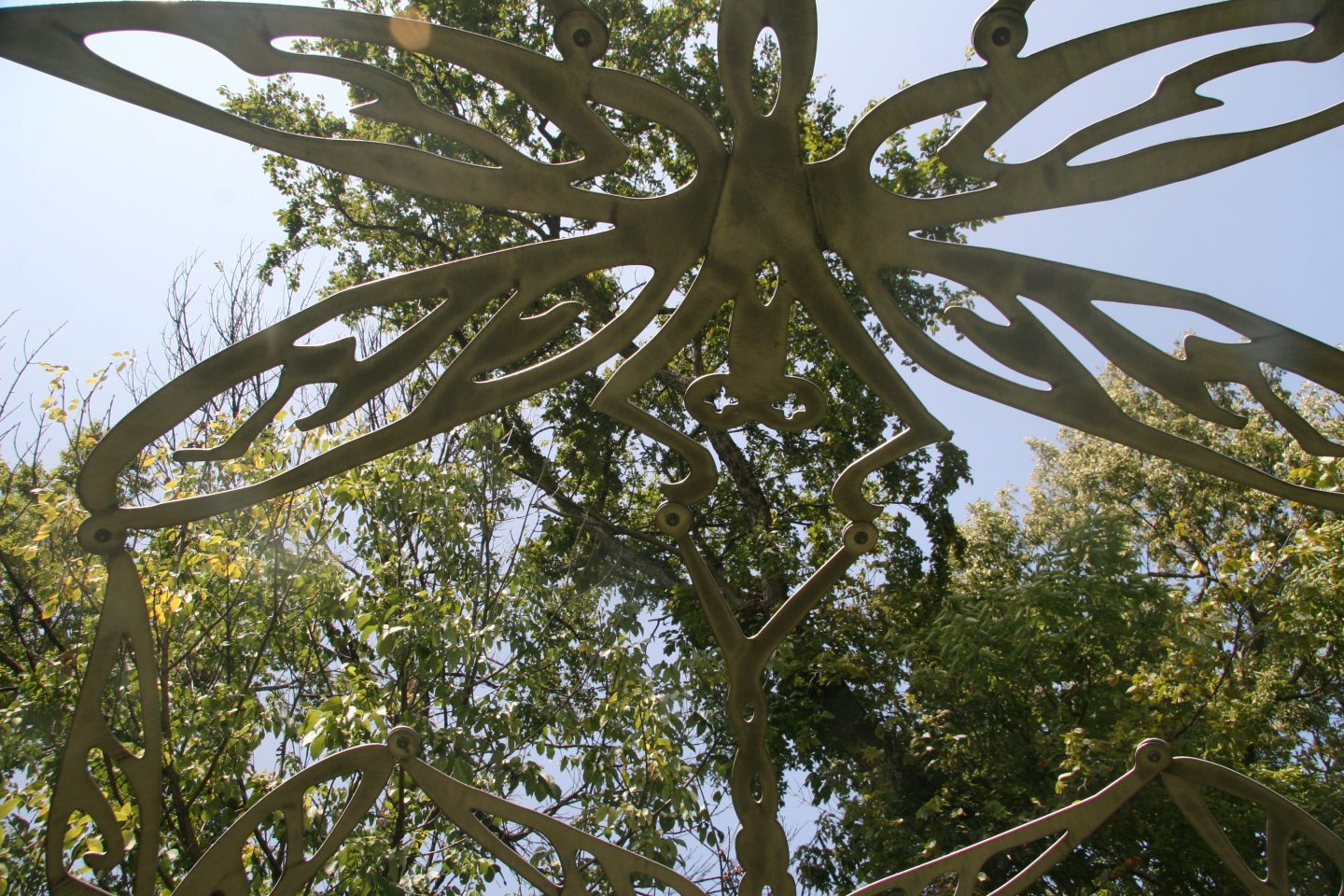 The focus of Pyramid Hills’s distinguished permanent collection is on monumental sculptures from the 1960’s to the present. The collection is anchored by several monumental works people travel from all over to enjoy. 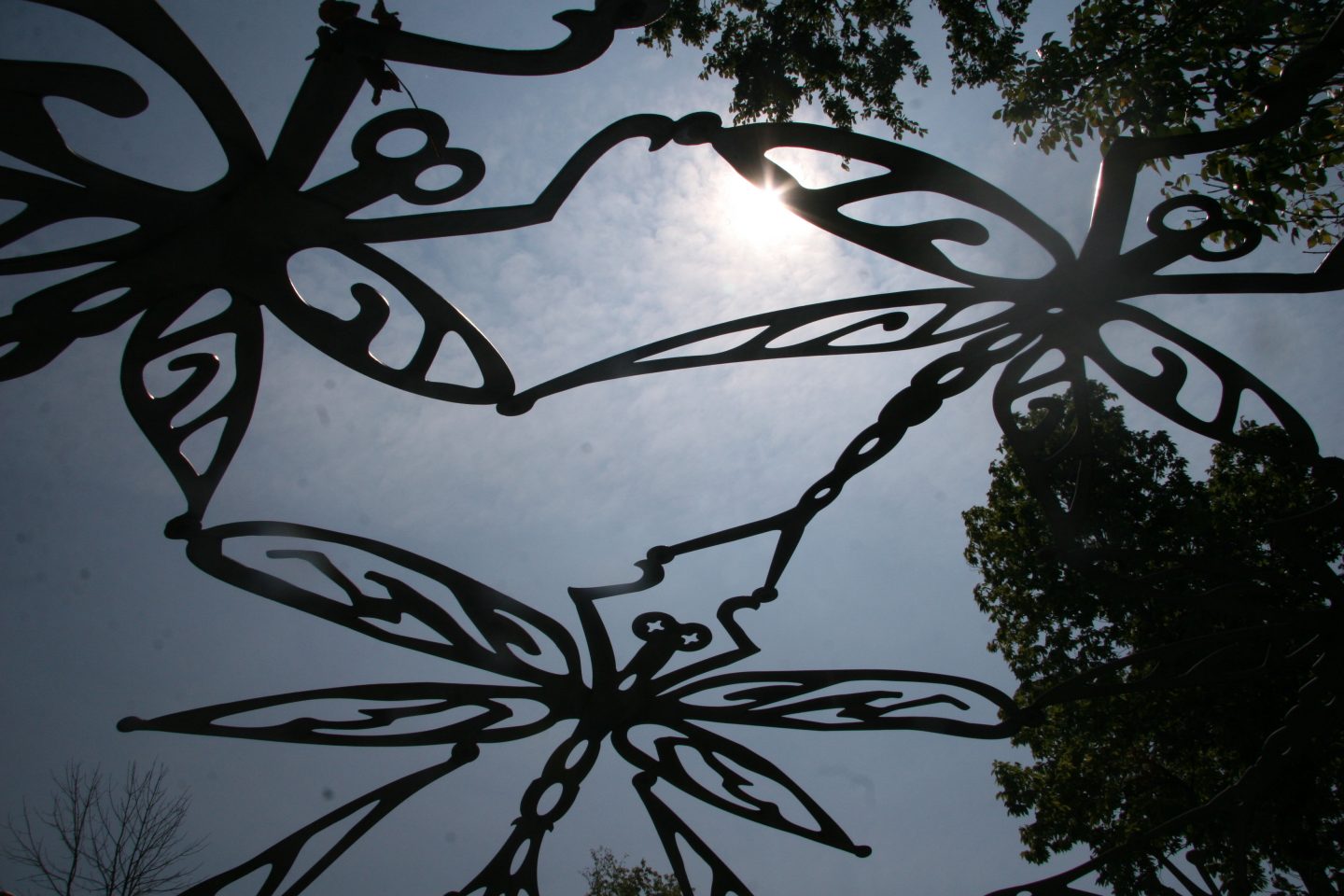 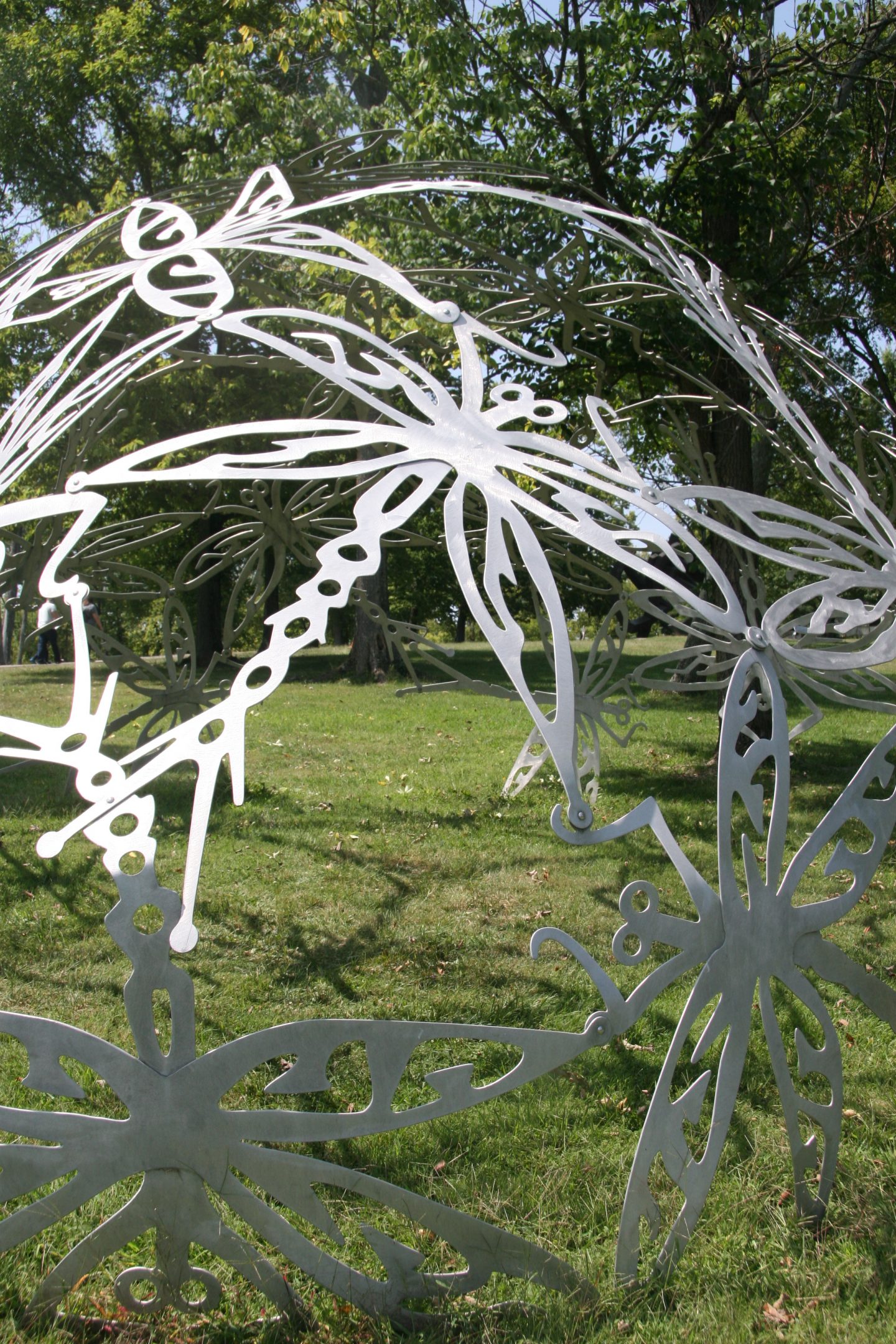 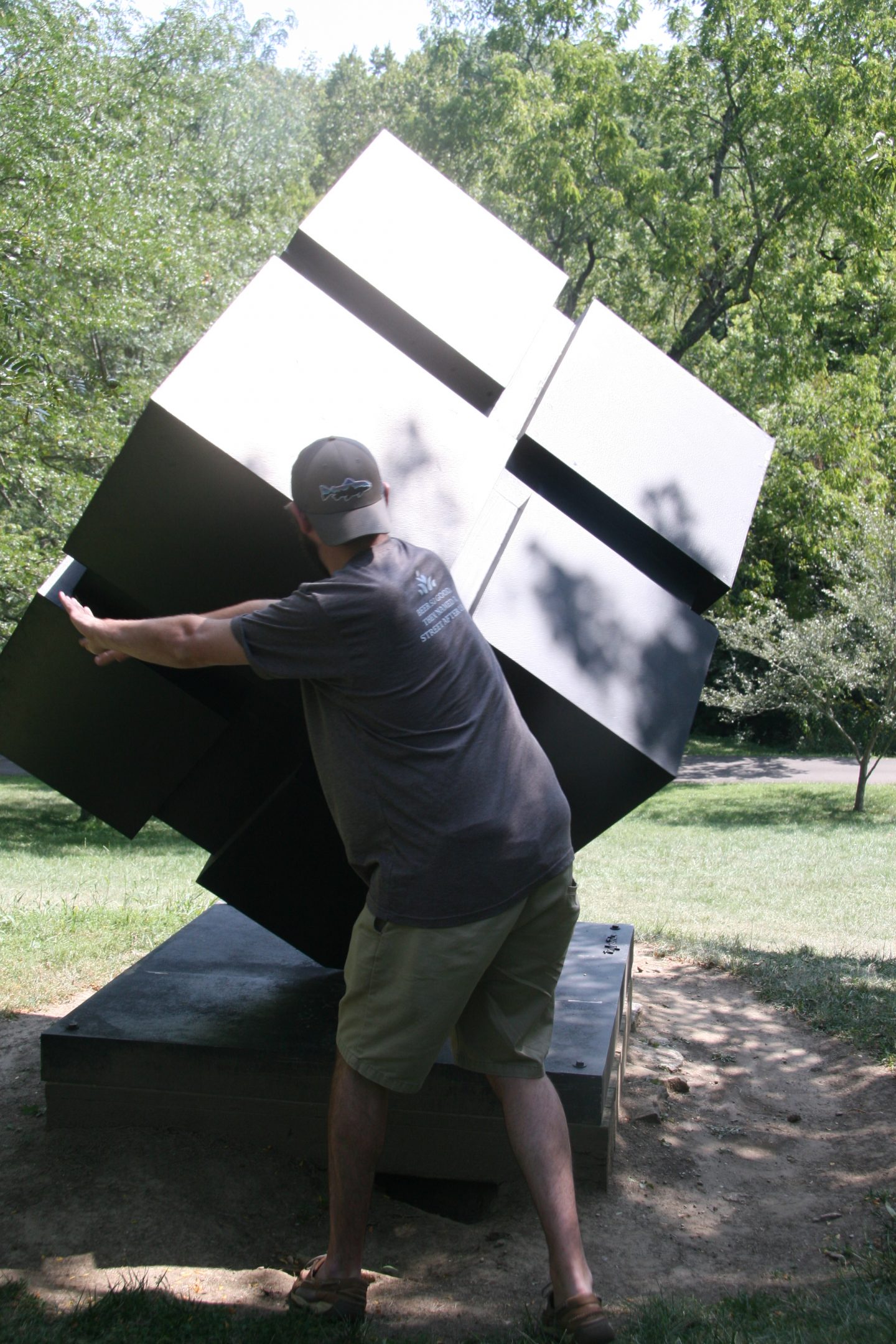 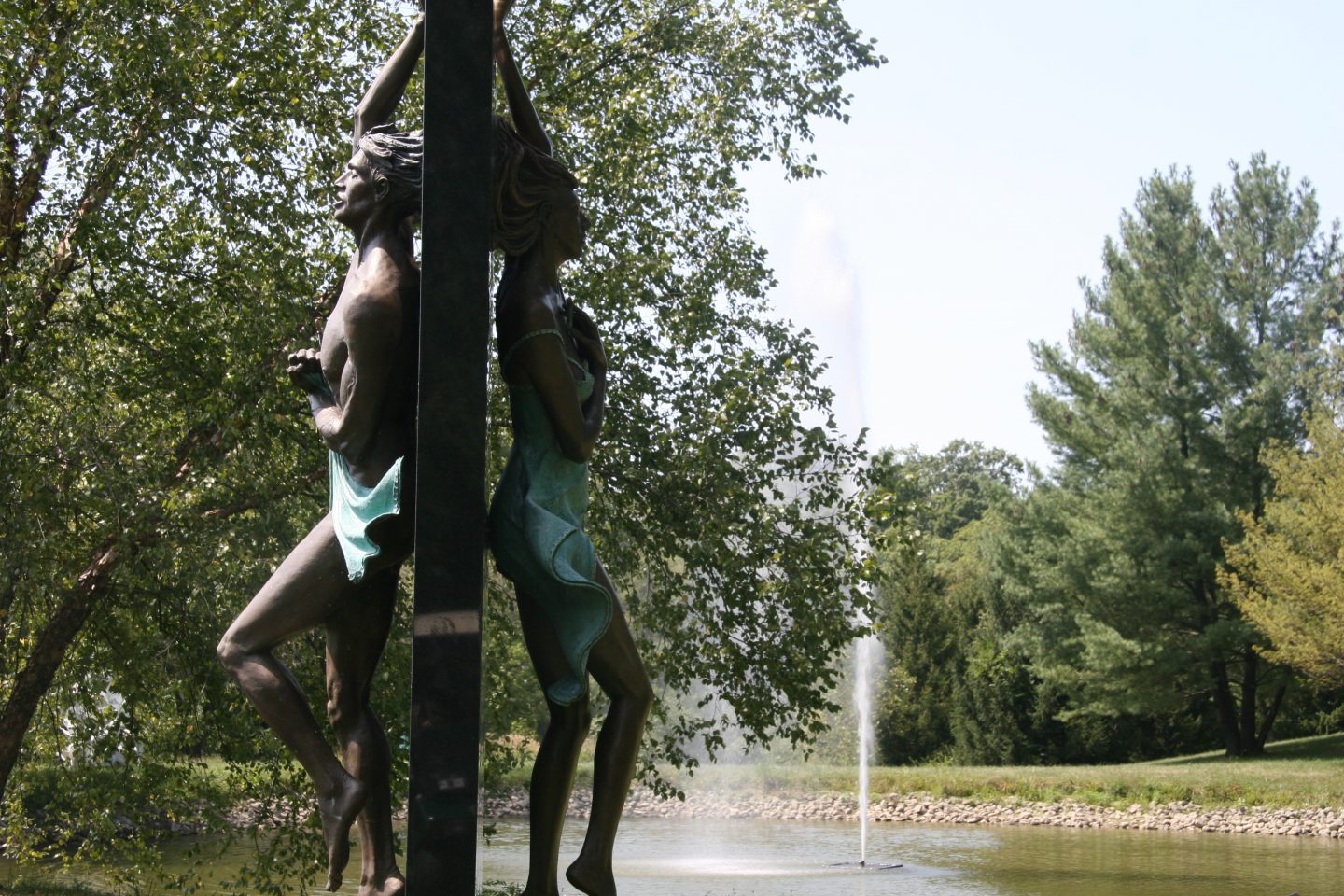 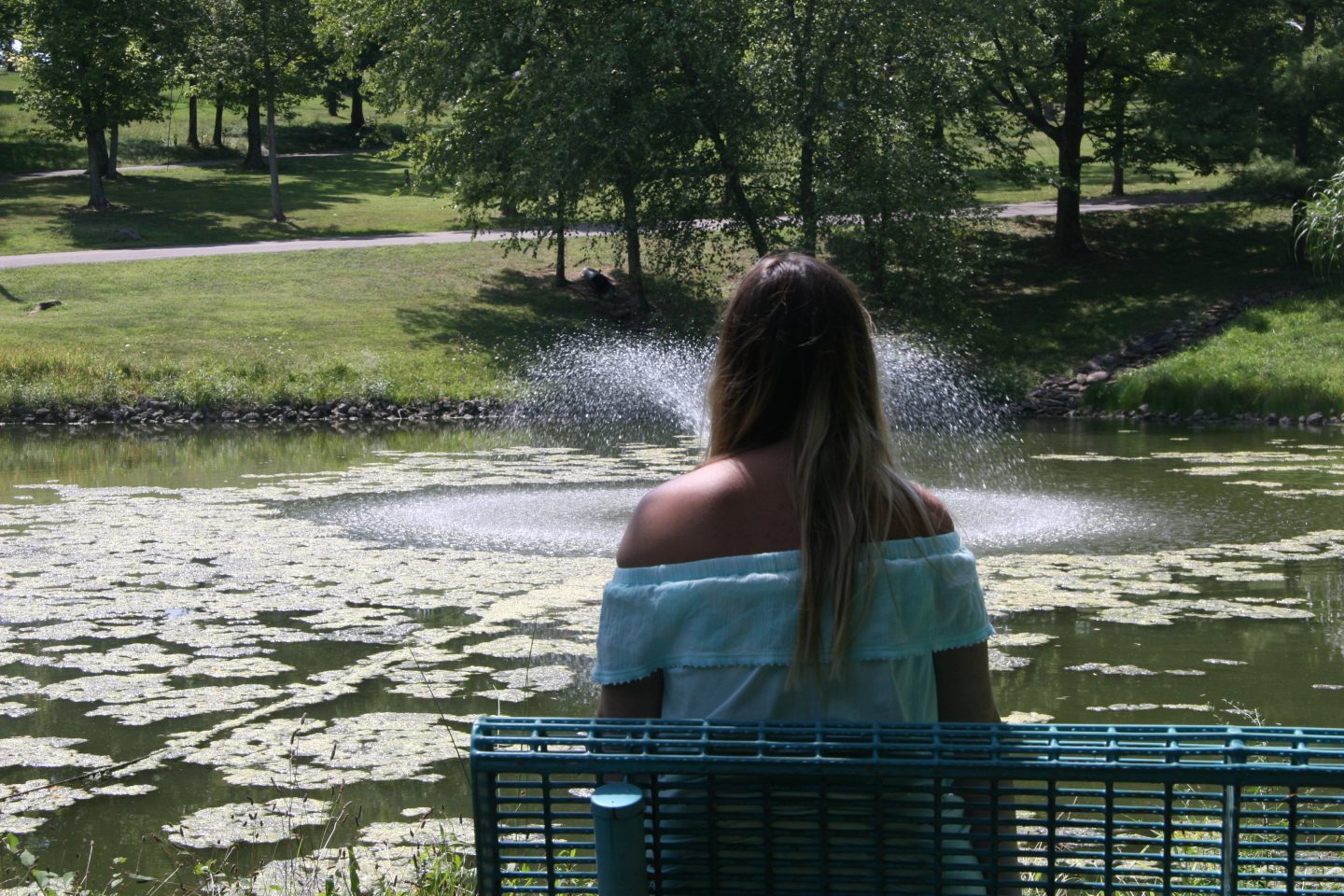 The park was crowded the day we visited. All of the carts had been rented and you could tell it was not an empty place. We barely saw anyone during our visit that is how large the park is. It’s not like you’re on top of other people trying to enjoy the art, there is plenty of space to seek some silence. 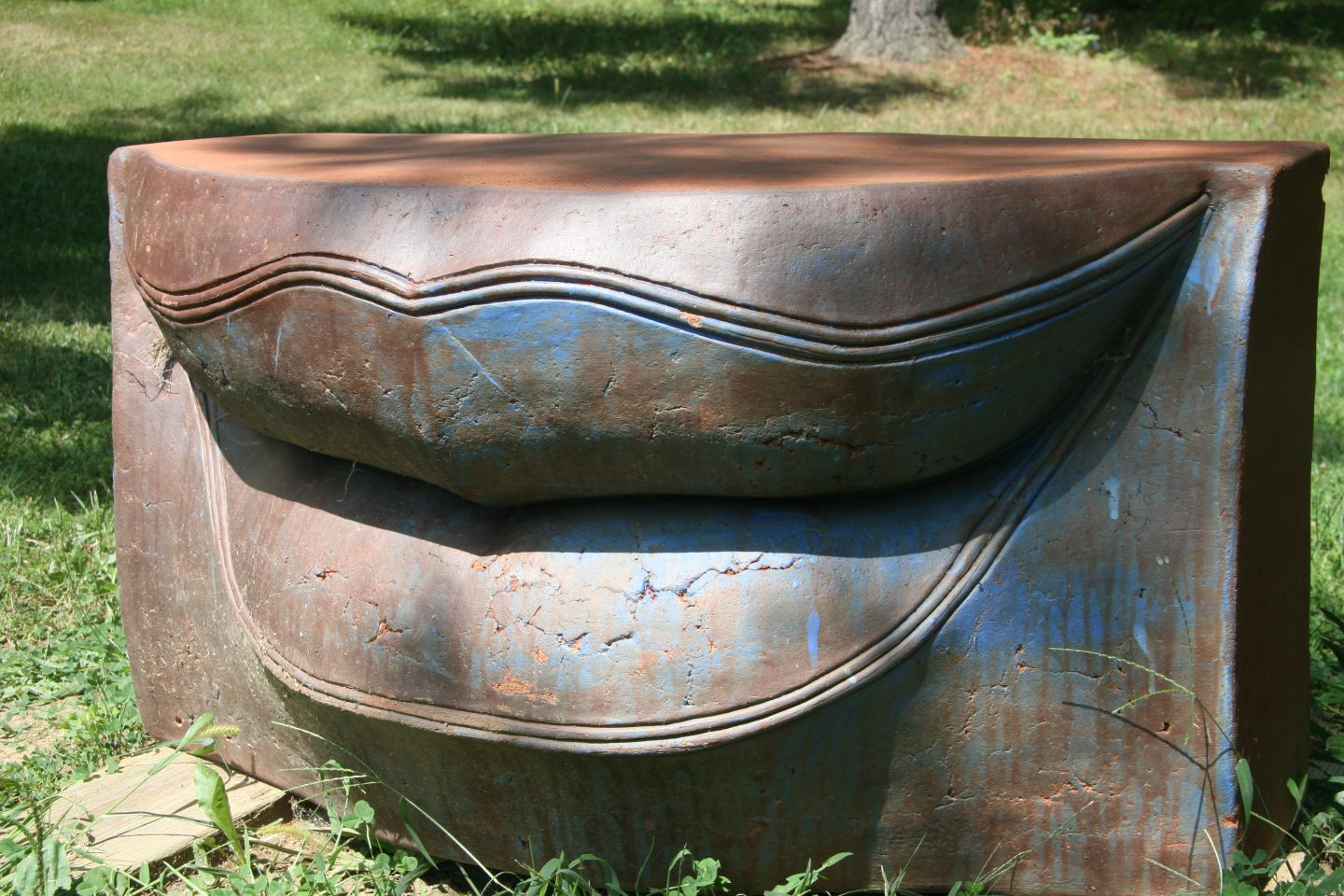 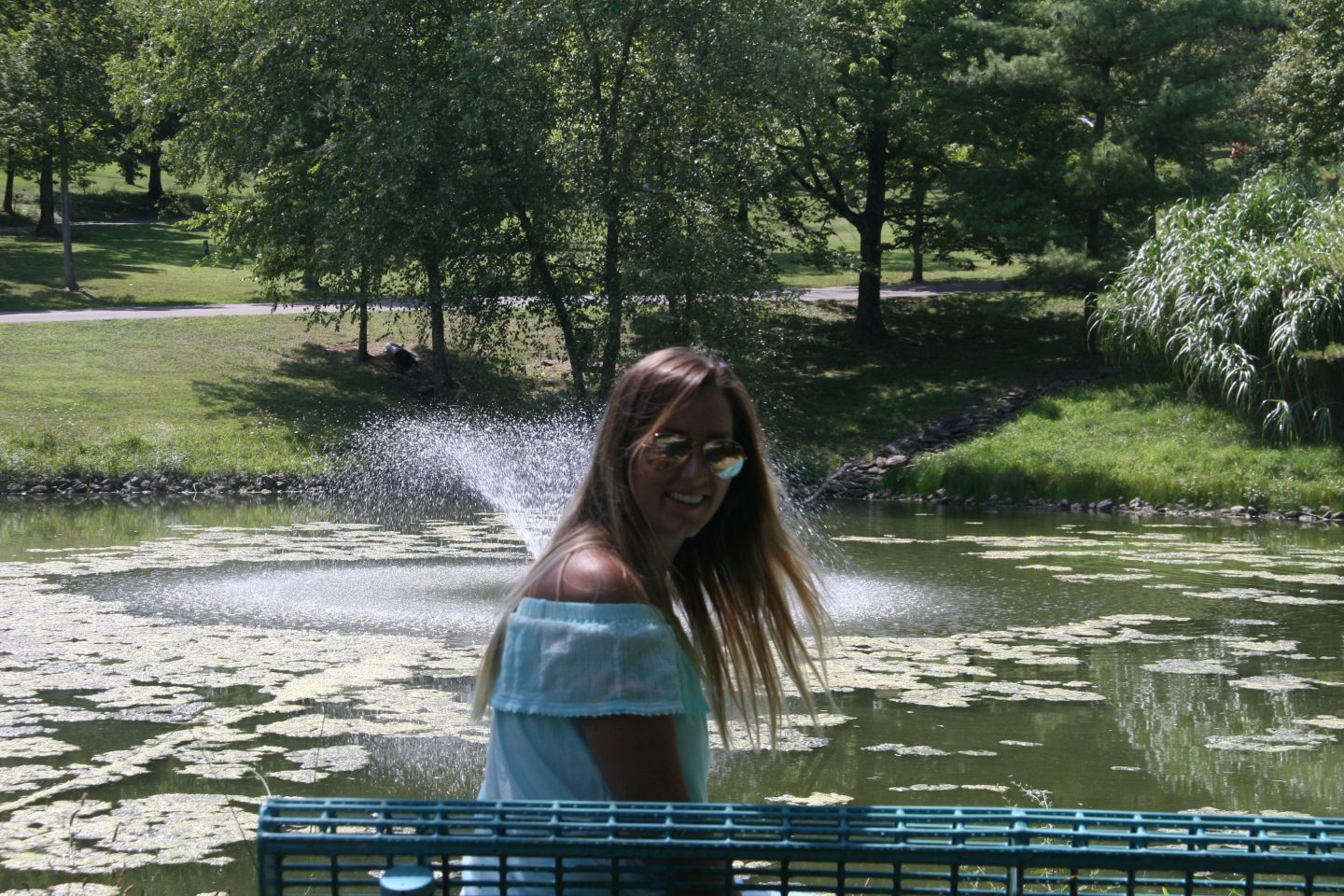 Tomorrow we are going to break from my Butler County adventure and I am going to share my absolute favorite bag lately. I am literally obsessed and haven’t carried anything since receiving it. The post will also include a GIVEAWAY! If you like fine Italian leather, stay tuned for the details on how to win some tomorrow!

We will finish out the rest of the week with the remainder of Butler County, beginning with Jungle Jim’s.