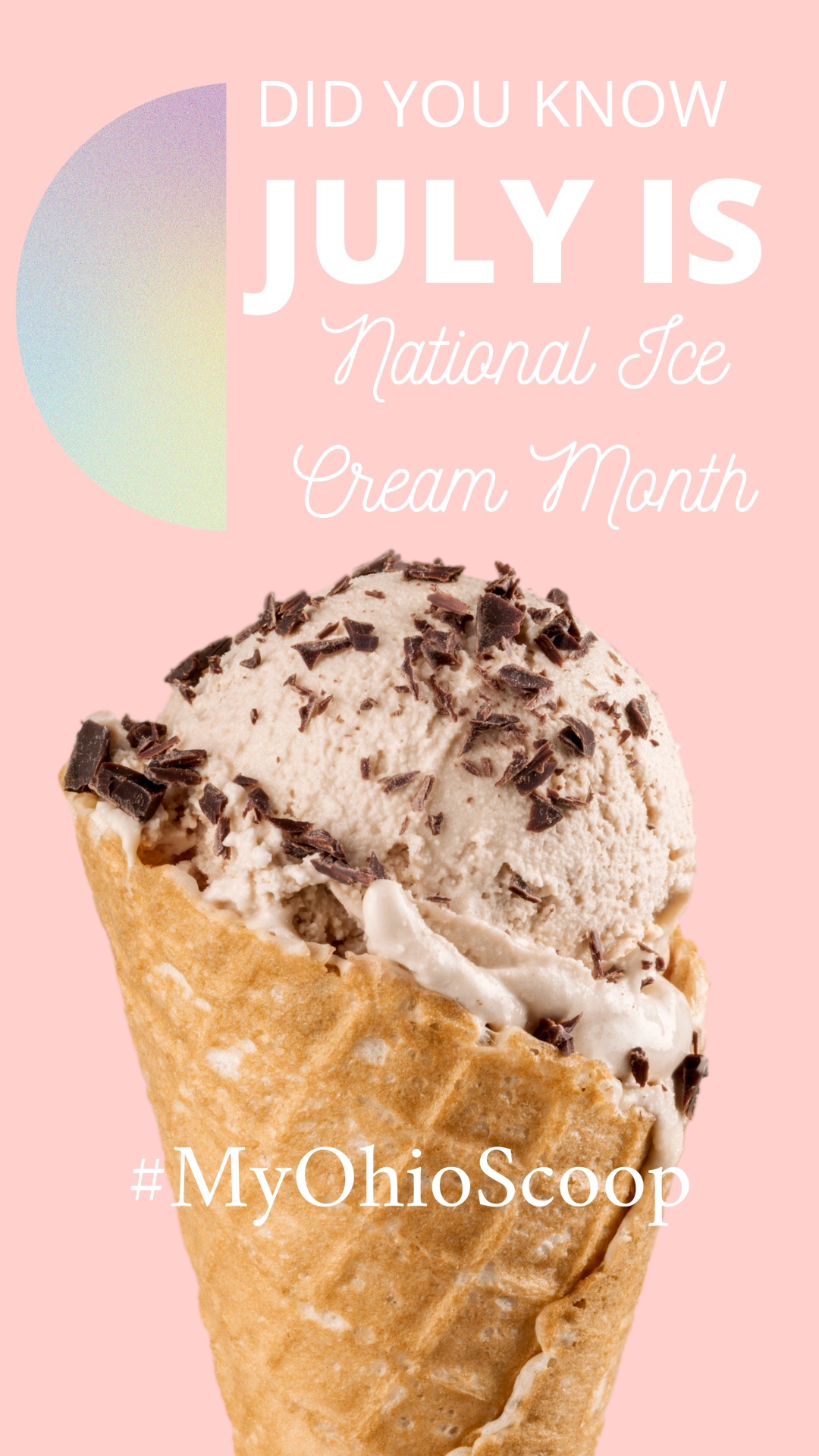 The best way to beat the Ohio heat this Summer? Cool down with the Ohio Ice Cream Trail!

July is National Ice Cream Month and with temperatures sizzling into the nineties, it’s the perfect time to eat all of the ice cream Ohio has to offer, before it melts! With 20 stops spanning our great state, the Ice Cream Trail is the perfect guided tour, of creamy Ohio tastiness. 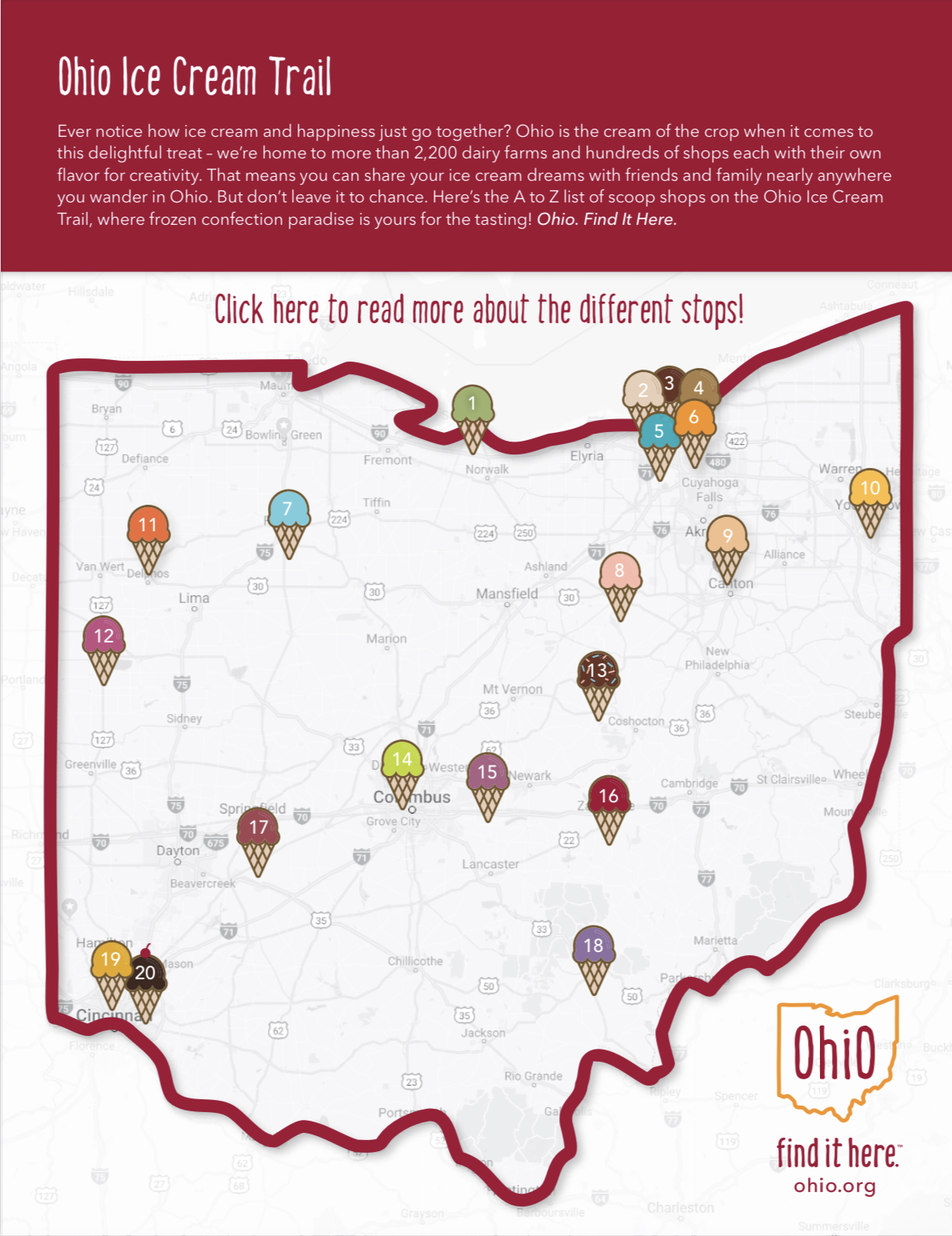 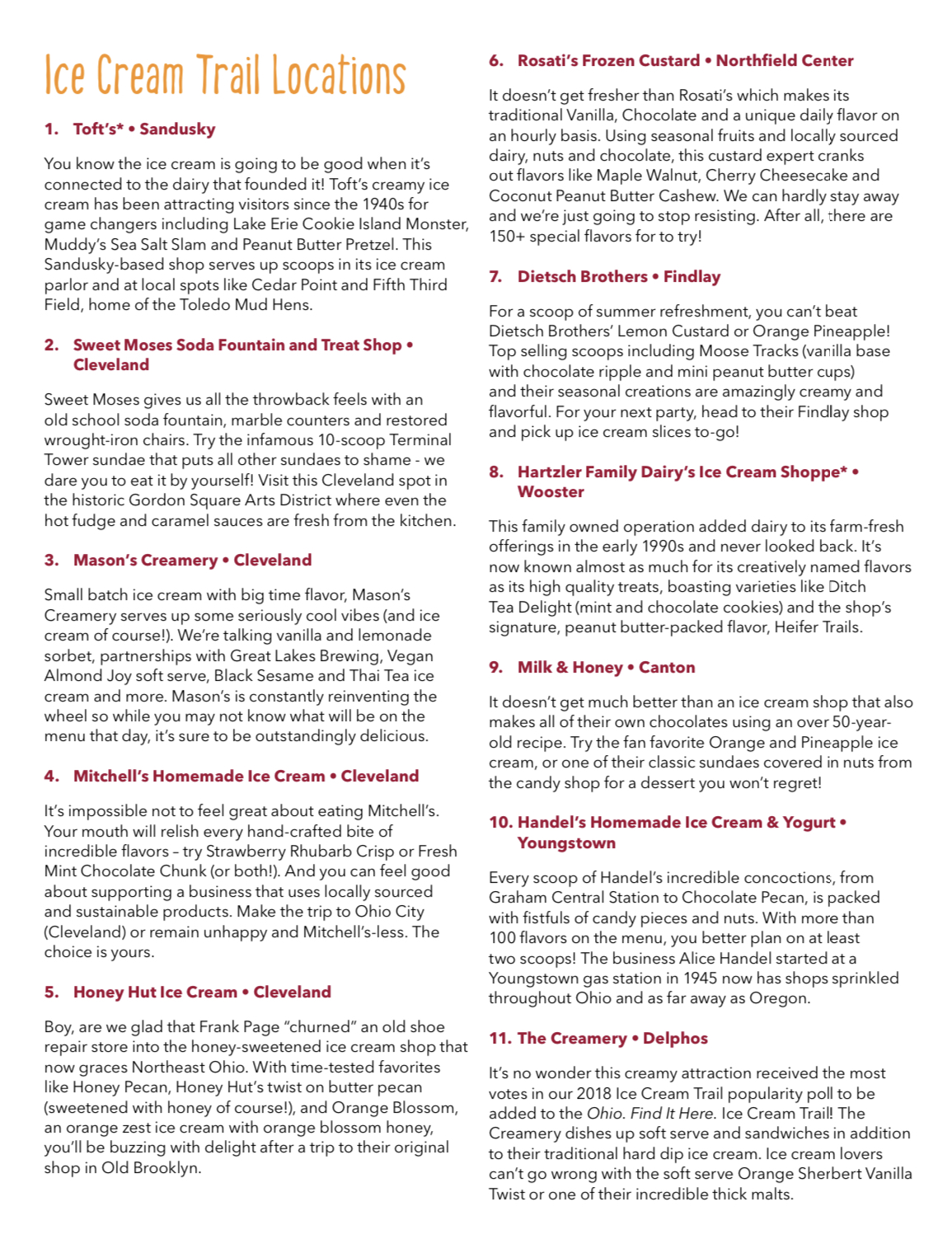 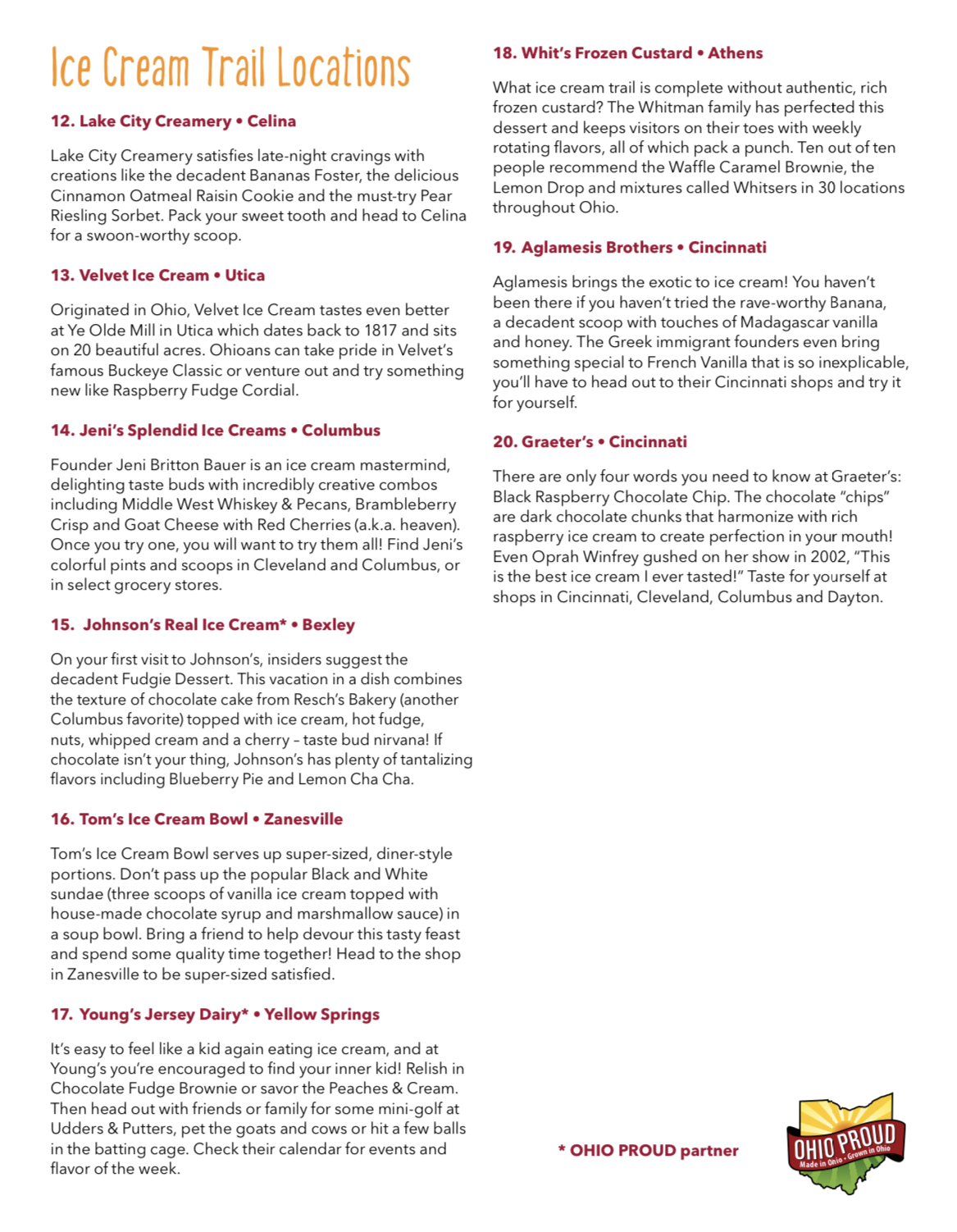 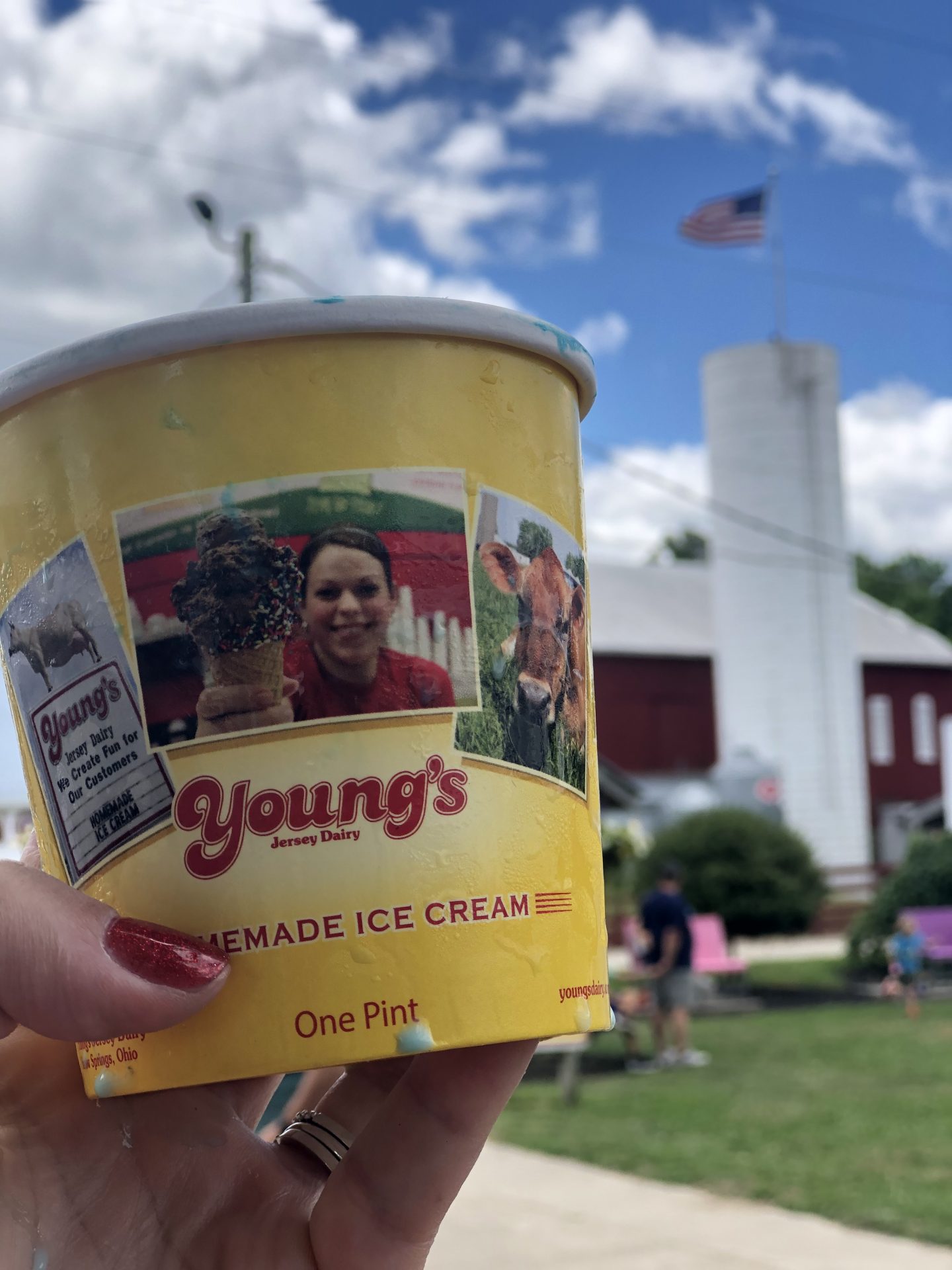 We made our first official stop on the Ohio Ice Cream Trail, at Young’s Jersey Dairy in Yellow Springs, Ohio just a quick 50 minutes outside of Columbus. We’ve driven by the Dairy several times on our way in and out of Yellow Springs but never had the time to stop and explore. This is a perfect place to bring the whole family for a fun filled day, much more than just enjoying a cool cone. 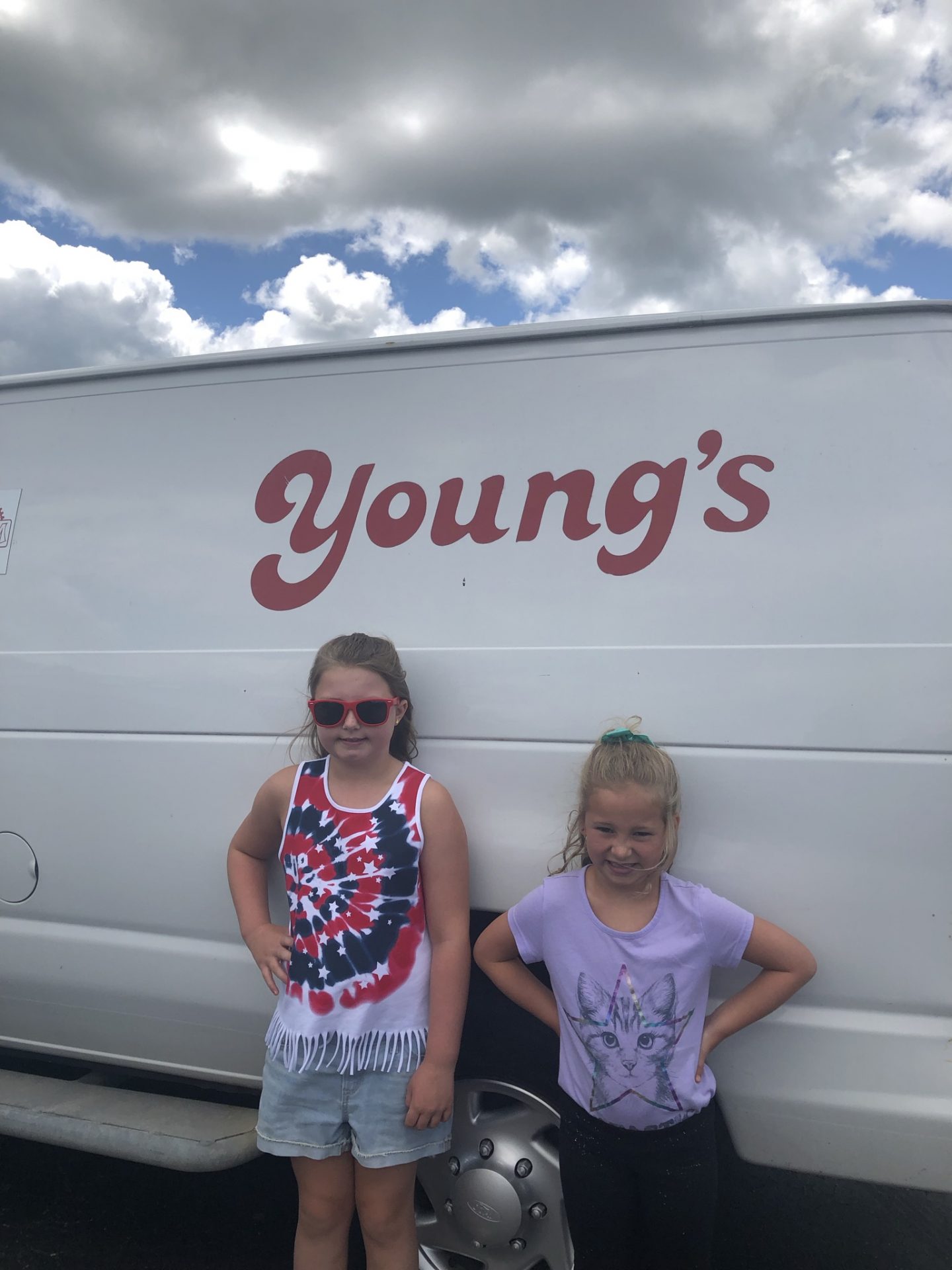 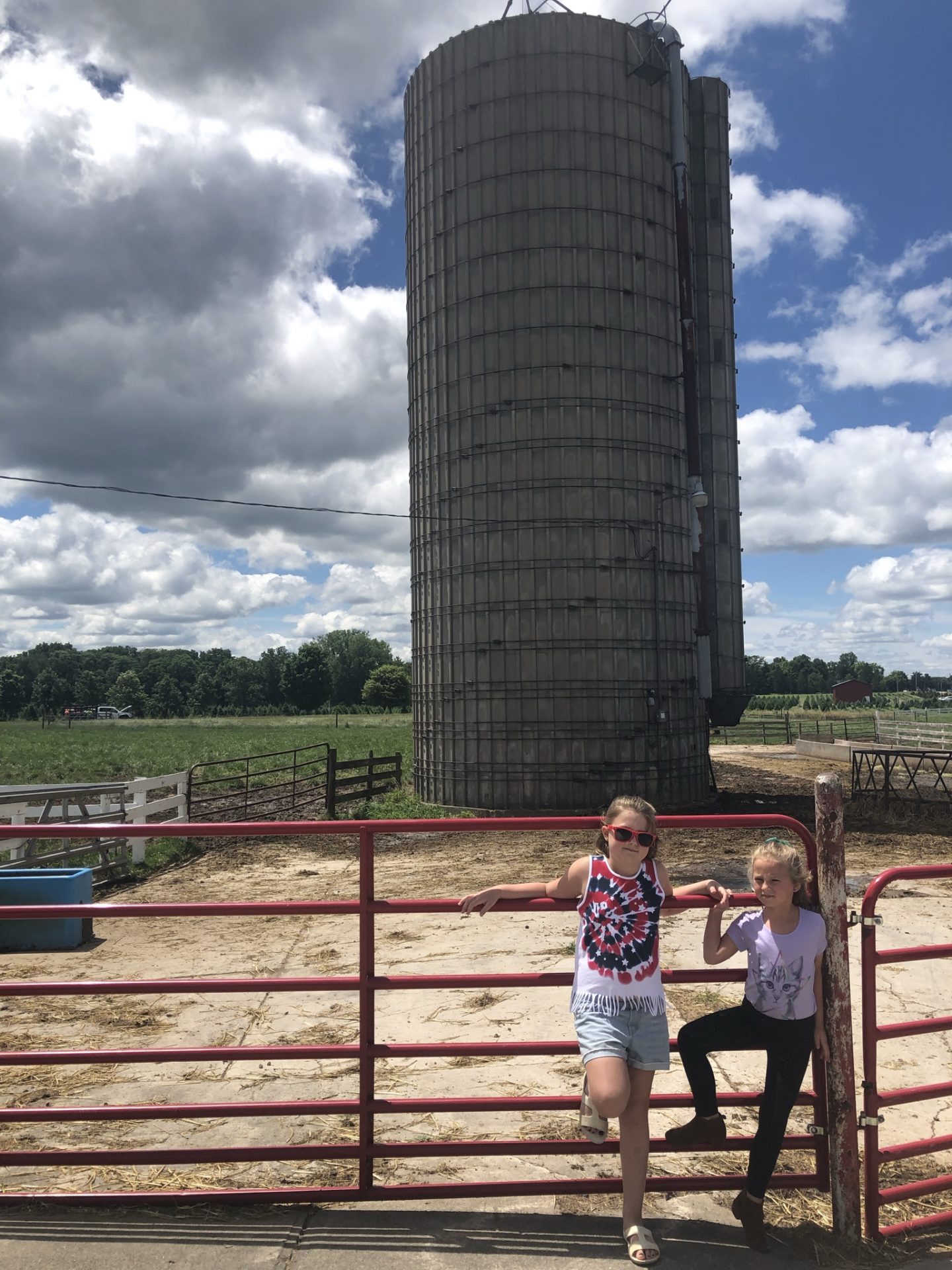 Young’s history begins in 1869 when relatives of the Young Family built the red barn. Hap Young bought the 60-acre farm and house shortly after the end of World War II. For the next 10 years, Hap and his three sons, Carl, Bob, and Bill, farmed the 60 acres, plus up to 500 additional rented acres. They grew grain, raised hogs, and milked cows.

In 1958, the Young Family decided to try to sell our Jersey milk directly to the public. The first sales room was a modest operation. We built a 10’ x 10’ room onto the end of the milk room. The equipment was also modest – some glass jugs, a refrigerator, a cash drawer, and the honor system. The customer would drive up, open the refrigerator, get his gallon of milk, leave an empty jug and the money, and drive away.

There was a market for farm fresh milk, so in 1960, we build and opened our first real dairy store. We started dipping ice cream in this store. We also added other dairy products, like cheese, and snack foods.  This building is attached to the big red barn and is where we make our ice cream today.

We added onto this building twice over the next 8 years.  In 1966, we added a small bakery. By 1968, we were running out of room. They have continued to expand ever since, adding several more family fun attractions as well as a big beautiful new dairy building opening SOON! 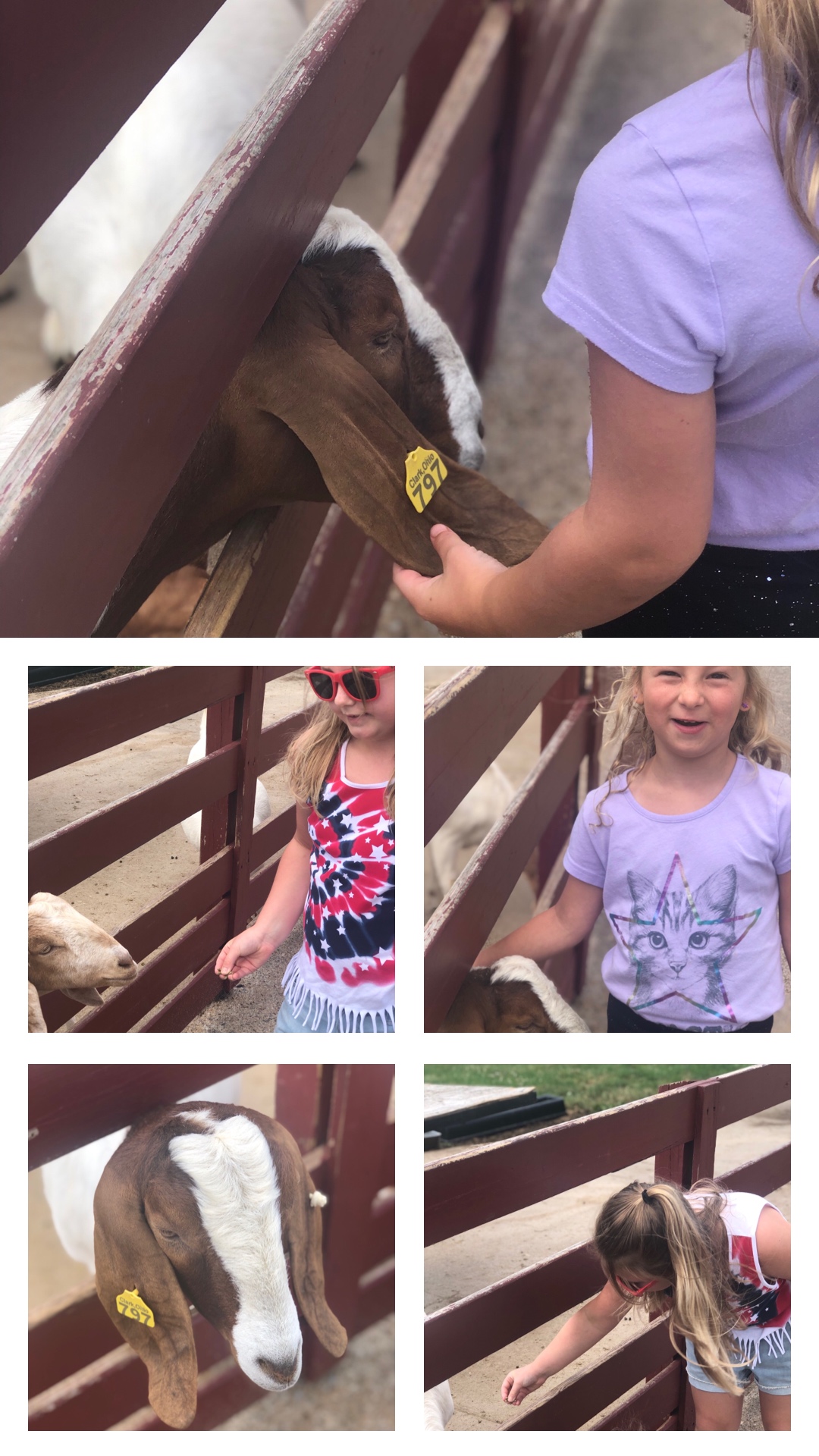 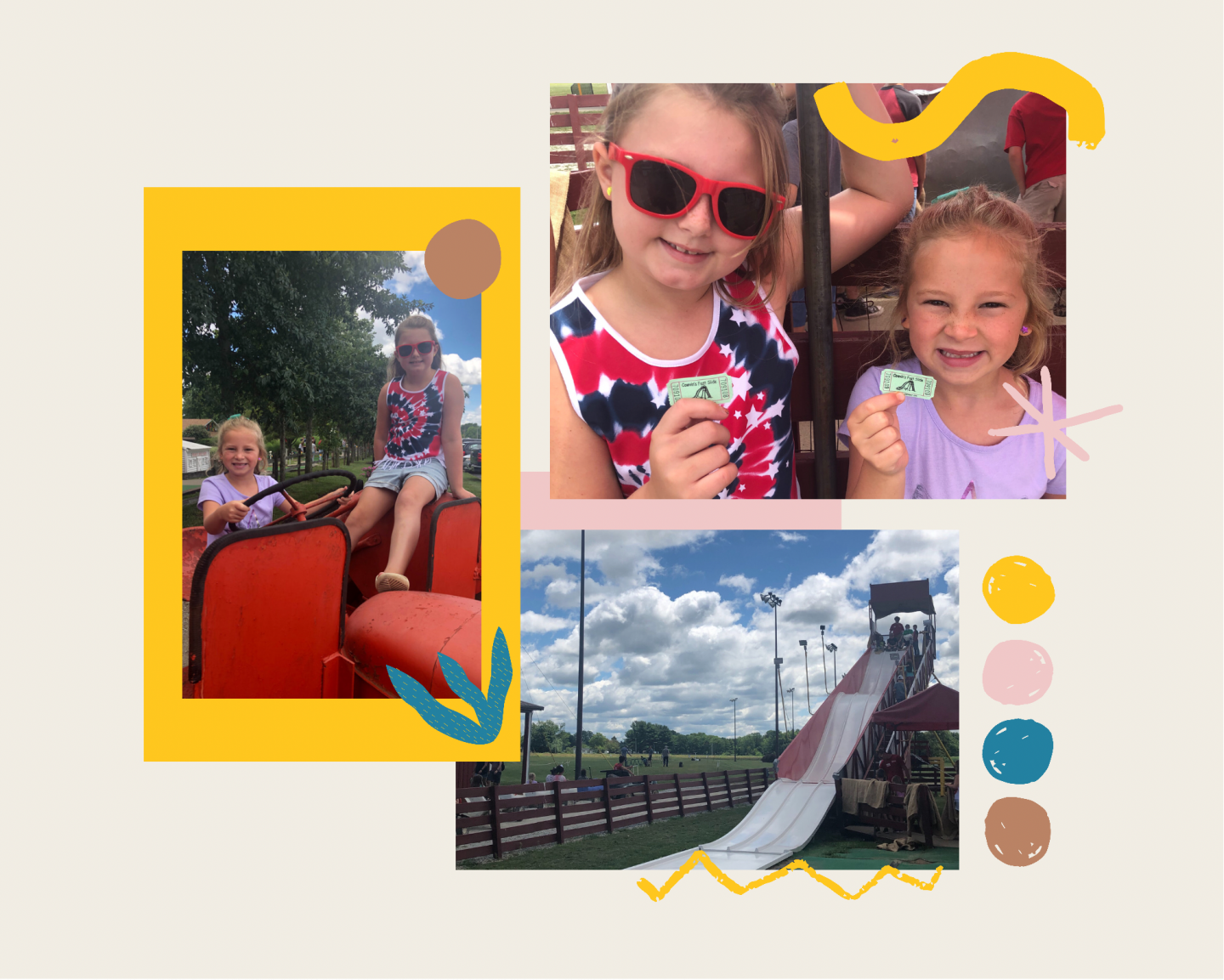 More family fun things to do?

Cowvin’s Corny Maze – which opens each year in late August until the end of October – a fun trip through a maze in one of the cornfields, complete with a wagon ride to and from the Maze.

Pick Your Own Pumpkins – they plant about 30 acres each year of pumpkins small to large, and everything in-between!  You choose the perfect pumpkin out of the thousands in the field.  Pick Your Own Pumpkins includes a wagon ride to and from the pumpkin patch.  This activity starts on the third weekend in September for five weeks.

Cowvin’s Kiddie Corral is designed for younger Guests and features bounce-house, little tractors that can be pedaled around a wooden track, a corn pit (instead of sand pit) to play in, little slides, hay bales and more.  This activity is located next to the batting cages at Udders & Putters.

Cowvin’s Kiddie Corral is open on weekend starting in late April, then daily during the summer. When schools start again in the fall, the hours are on weekends until late October. 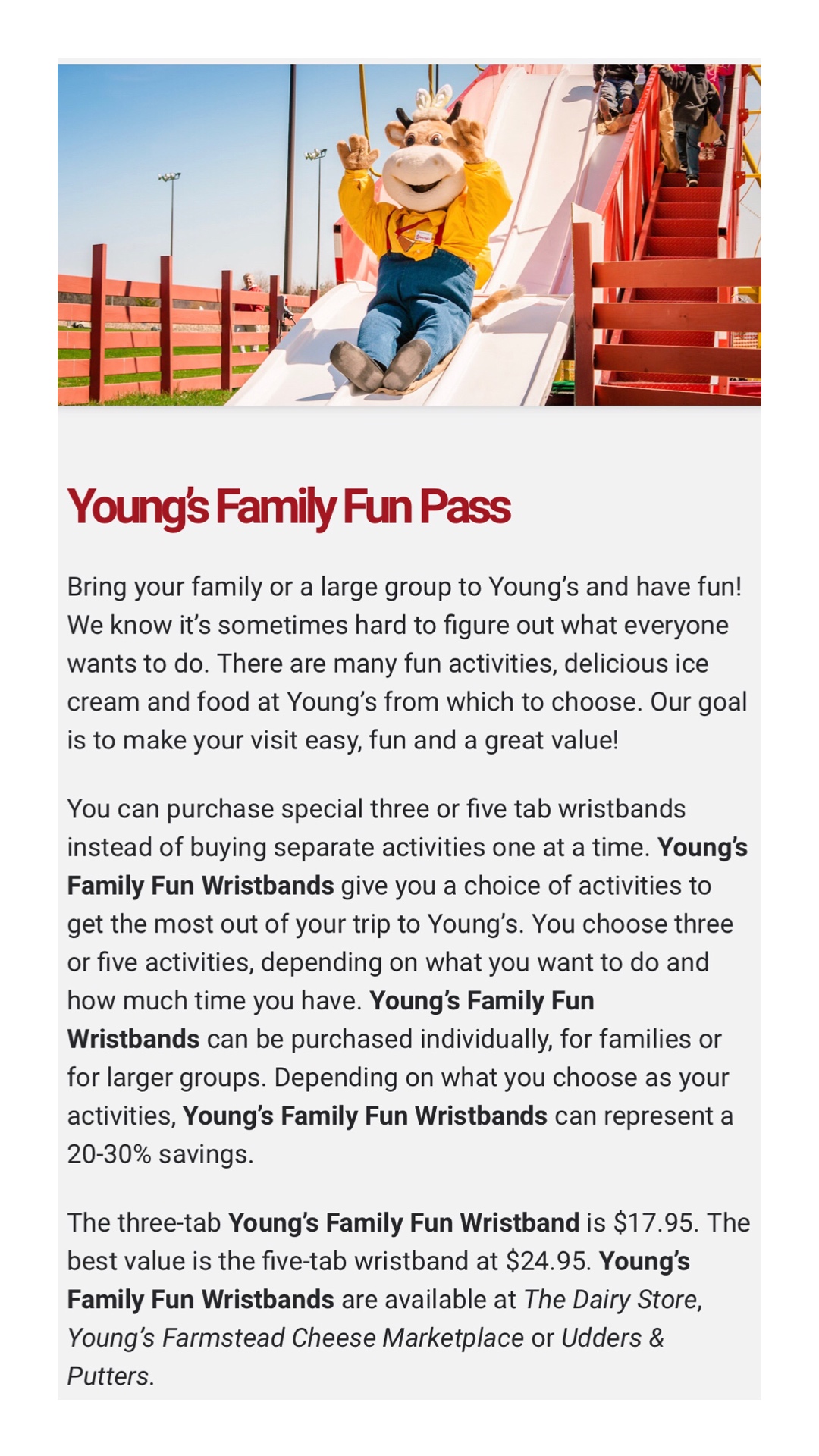 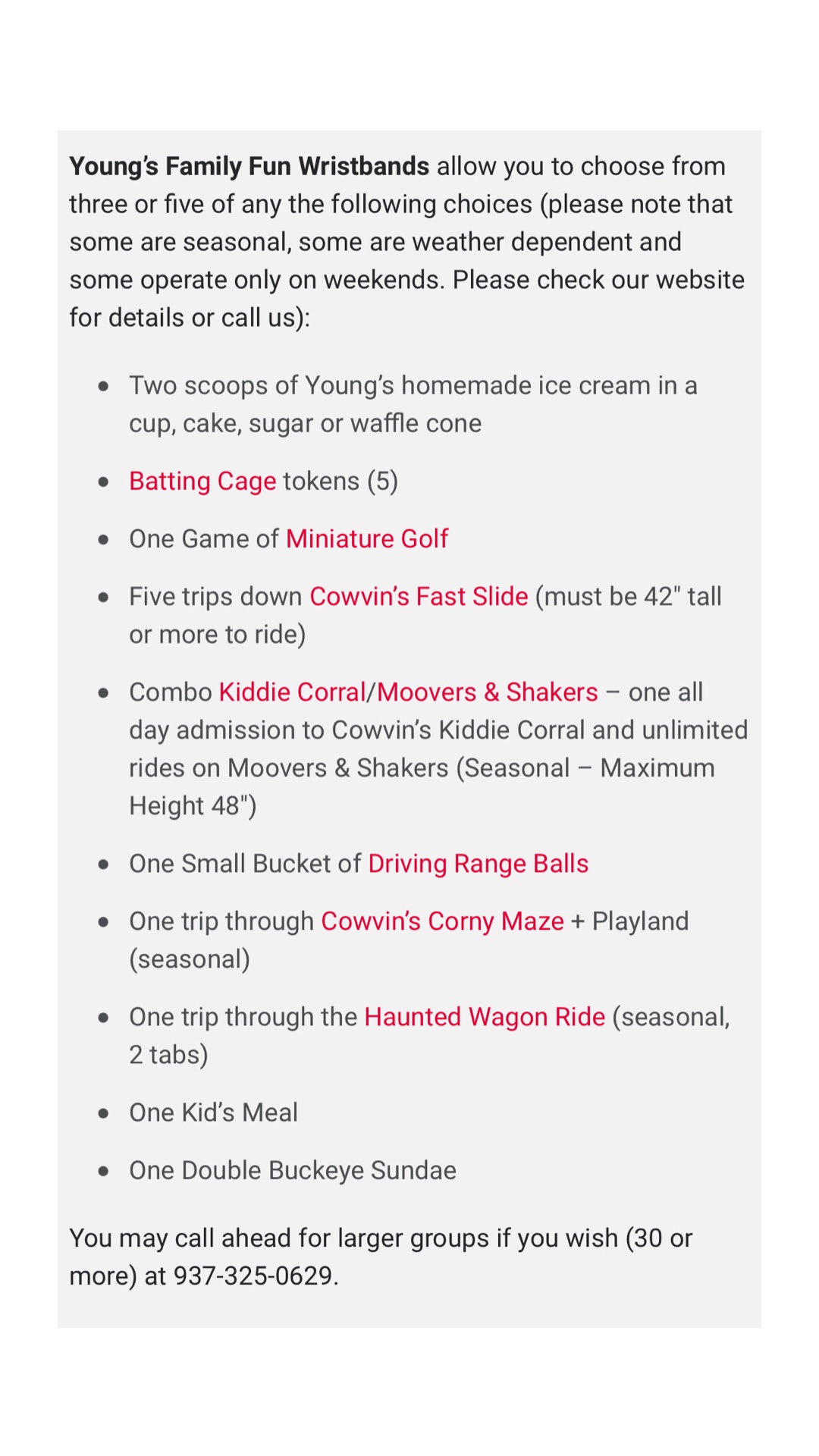 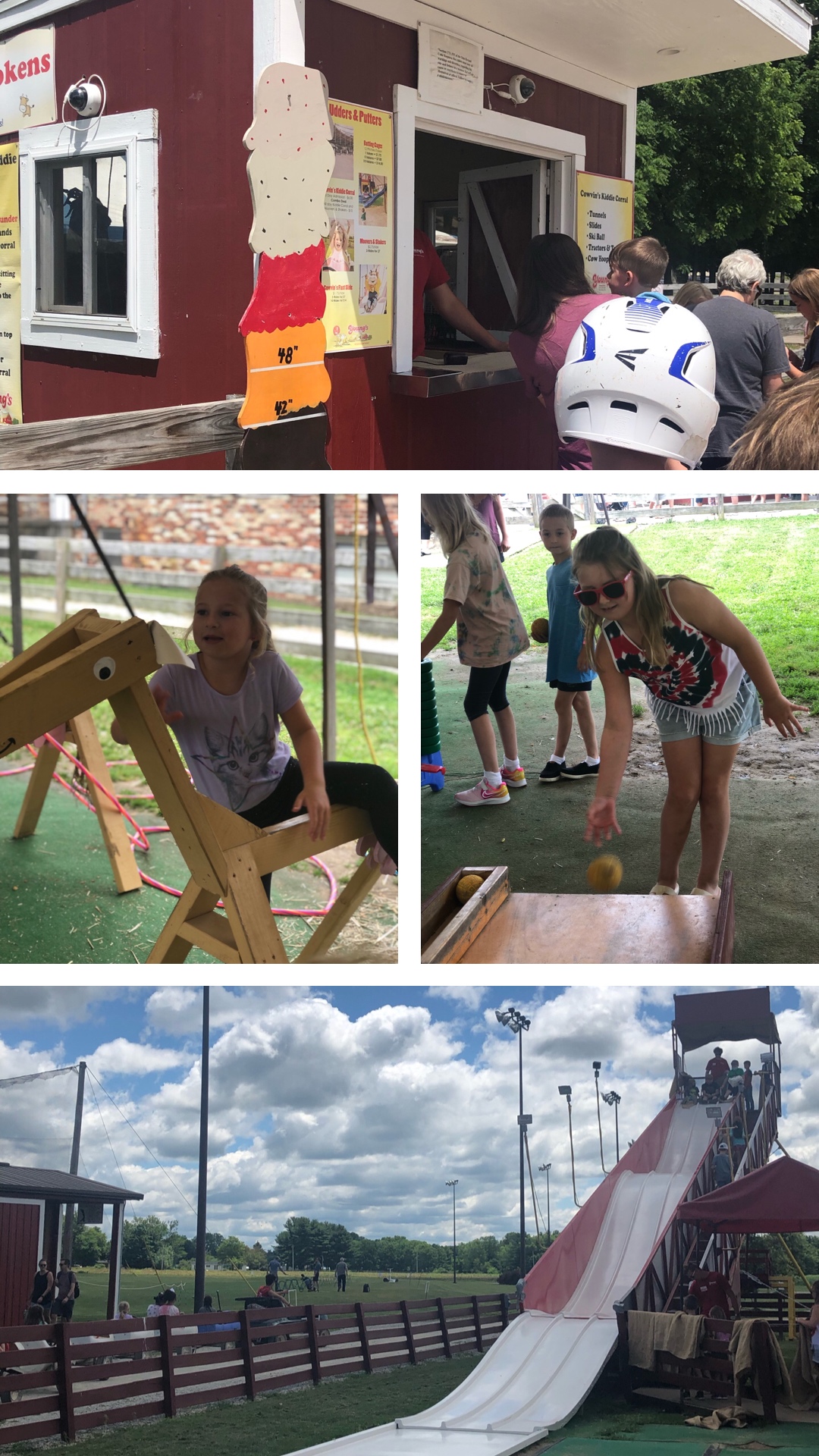 Young’s is #1 for Family Fun. What to do on your visit to Young’s? 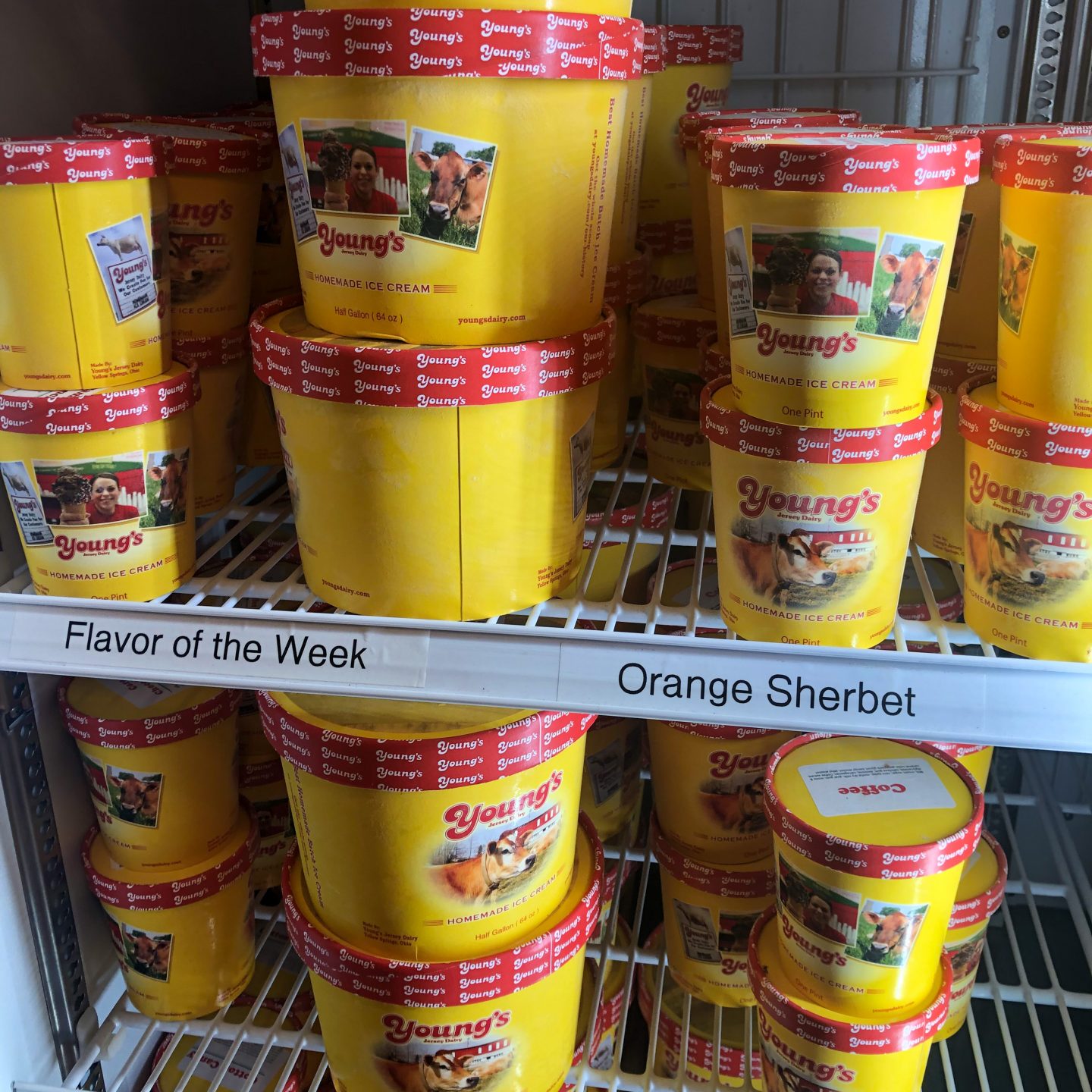 We visited on a day the Dairy was PACKED. We were still able to enjoy all of the attractions but with two young kids the line to get ice cream proved to be a problem I had not anticipated. Inside where you buy ice cream cones, there is a gift shop with little to no line that sells pints and gallons of ice cream. Because we couldn’t leave without what we came for, I bought pints for us to share and skipped the hour + line. I was able to walk right in the gift shop, purchase pints and walk out, keeping hungry little hands without ice cream for too long. We will definitely be making a trip back when it is less crowded to enjoy cones and cheese curds. All of the food looked delicious! 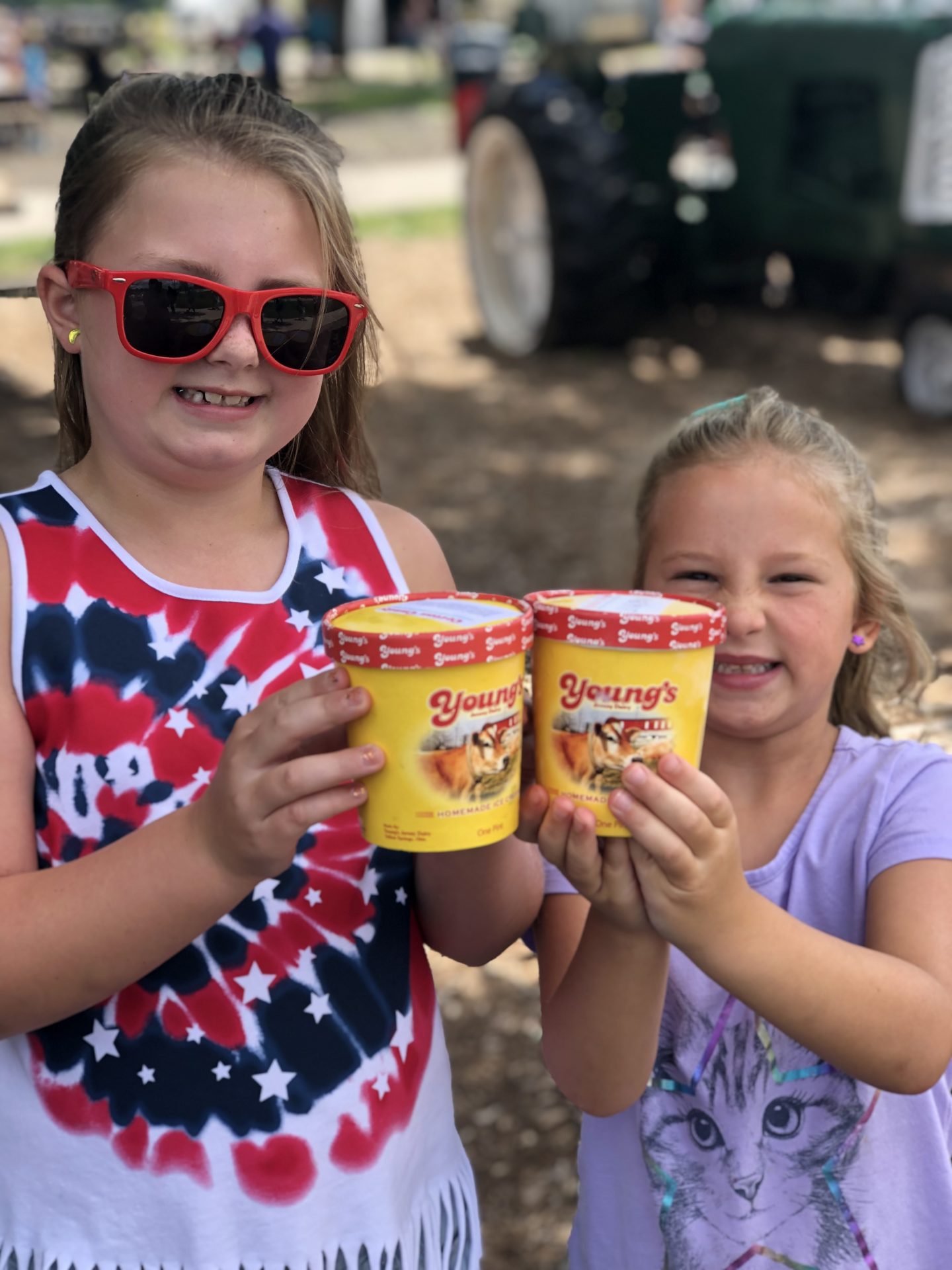 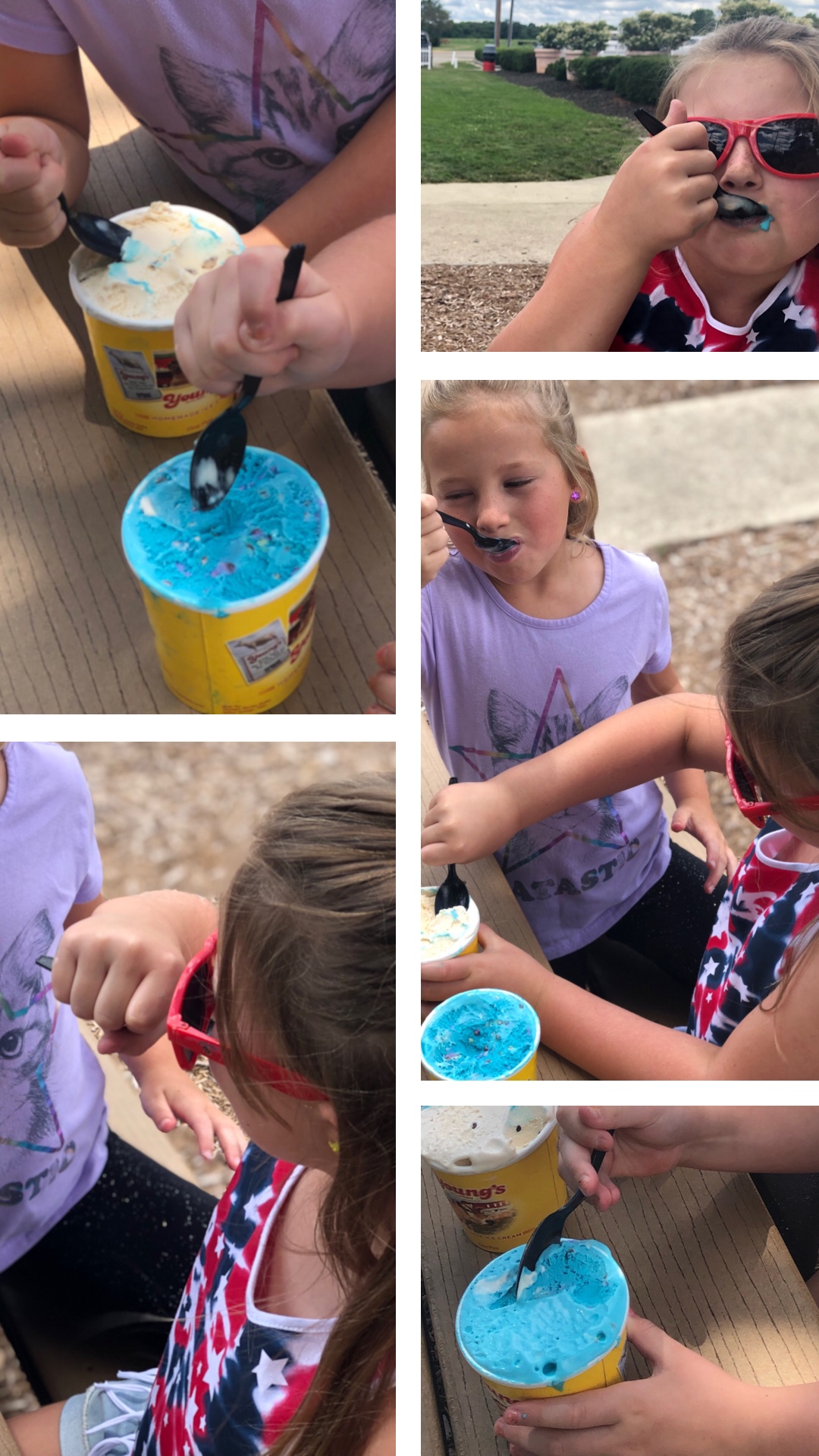 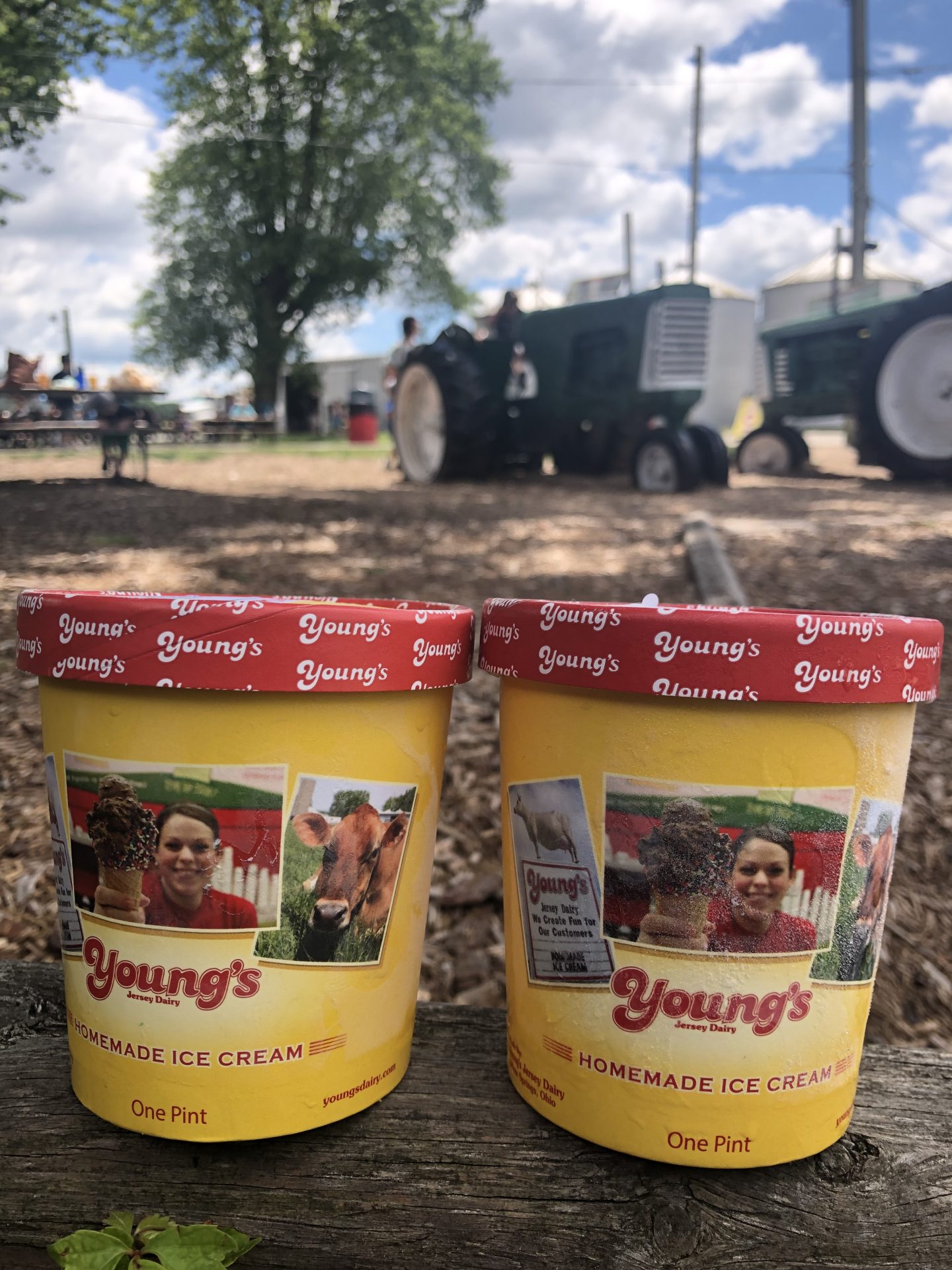 These stops are not on the official Ice Cream Trail list, but in my humble opinion they cannot be overlooked! Some of my absolute FAVORITE ice cream below! 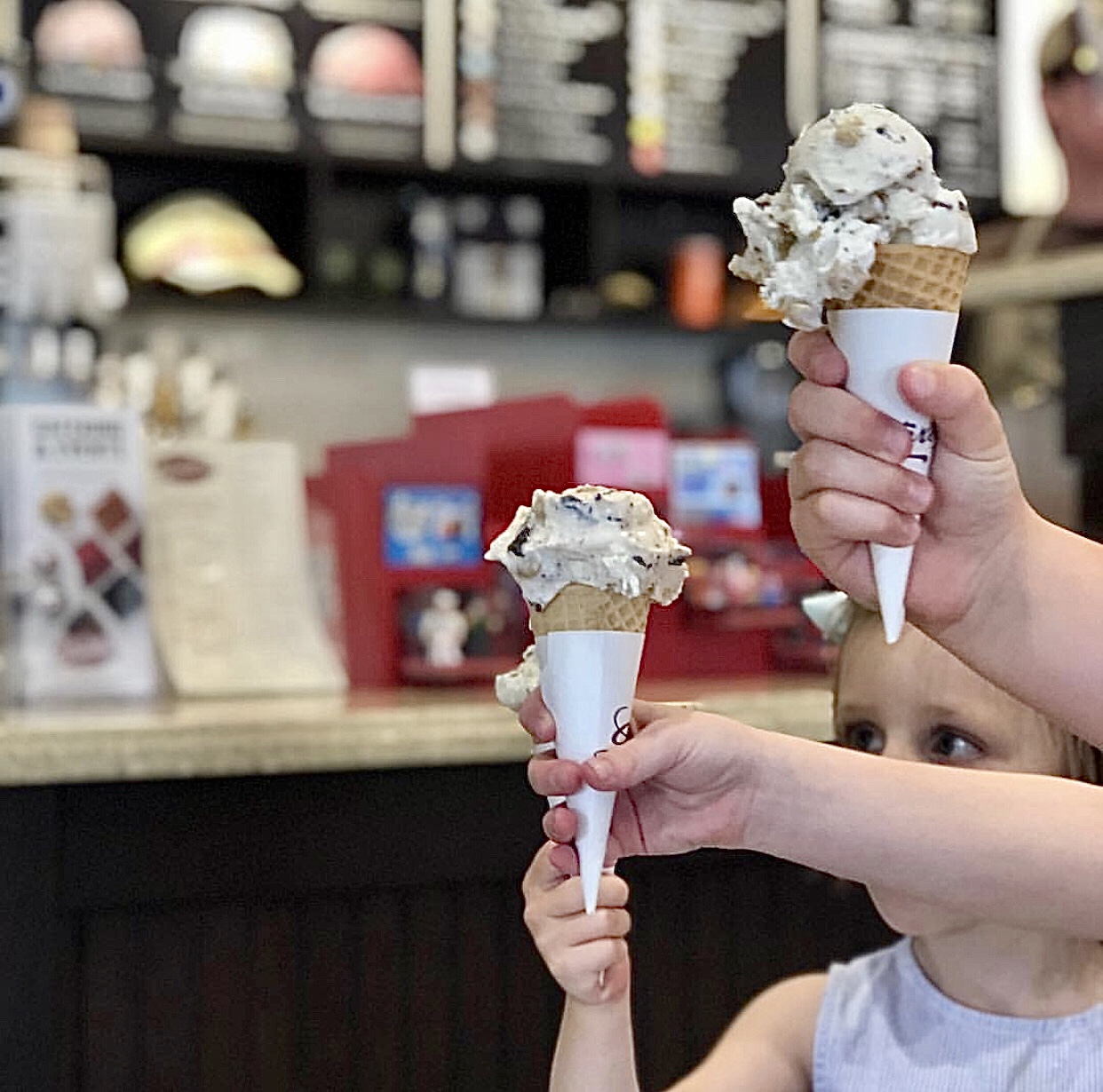 For my 37 years of life, my family has stopped in Dalton to get ice cream on the way to my Grandparents. You might zoom by it on Rt. 30 and not give it a second glance but it is an amazing treat off the beaten path. Ice cream is delectable, milkshakes taste like they are not of this earth, even their fries can’t be beat. 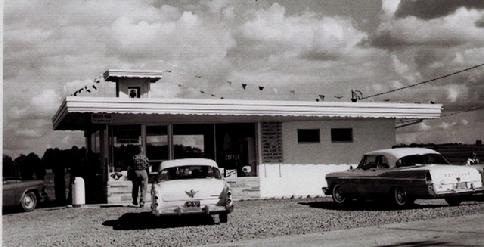 The Dari-ette was built in the Chrome Age — as in big bumpers and big fins on hot rods of the day.

It was 1957 when Kenny Zuercher built the drive-in restaurant you see today at Rts. 30 and 94. It remains much as it was then, a refreshing stop and relief from the bustle of the highway.

It is set in the bucolic countryside of Wayne County, amid farm fields and on the edge of the largest Amish population in the world. In fact, an Amish neighbor sells fresh vegetables from a stand behind the Dari-ette during the growing season.

The Dari-ette has largely been in the same family for 50 years.

Zach’s Mom lives in Mt. Vernon and Round Hill Dairy has quickly become a must visit every time we’re in the area. My favorite is any of their specialty sundaes. Drool. 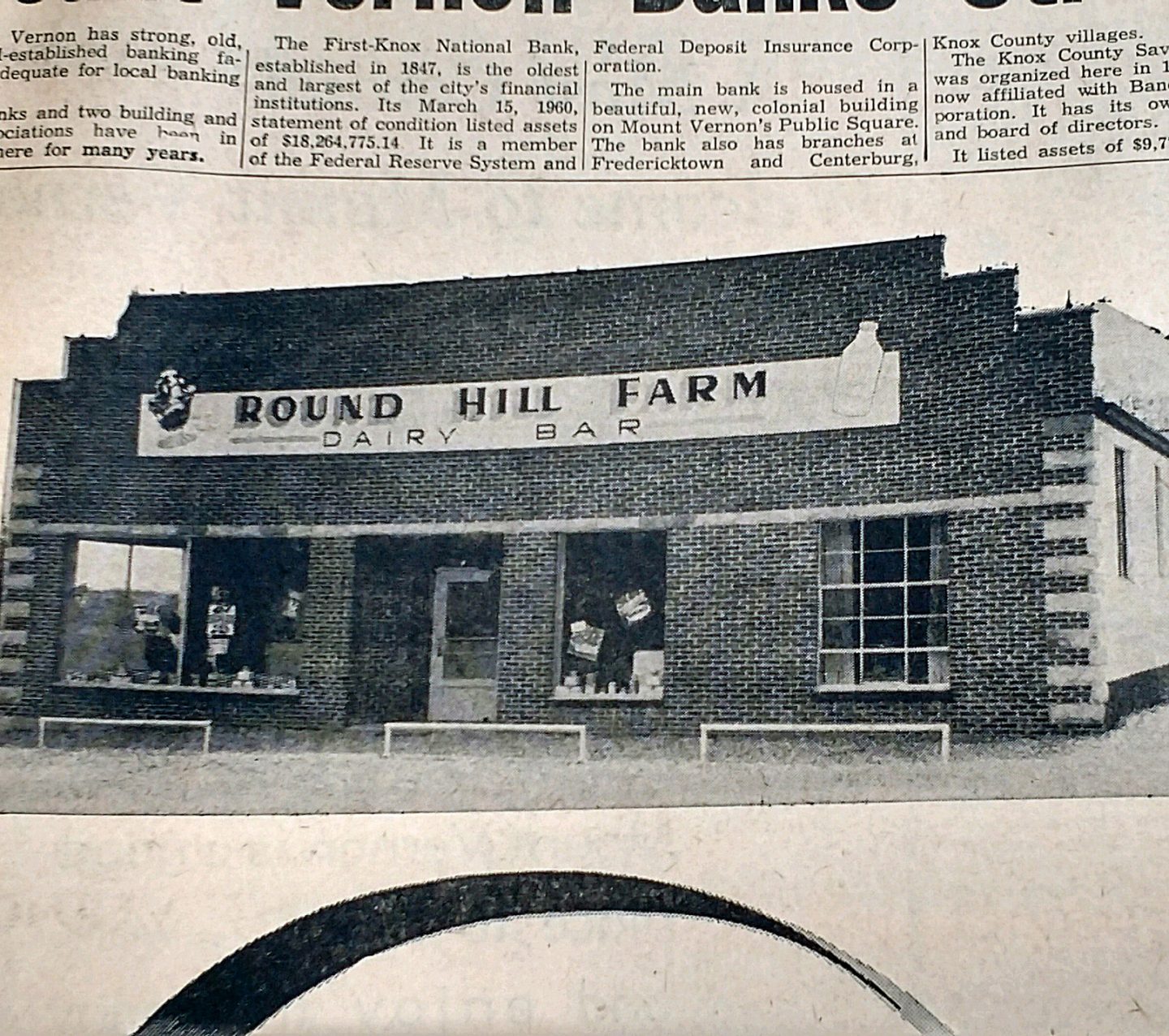 In 1946, Henry L. Curtis and Alice Curtis were about to start a business that would have a lasting impact on Mount Vernon, Ohio.

Henry’s father, Walter Curtis, sold milk from their family farm, Round Hill Farm. All milk was produced by their Jersey cows and delivered to homes around Mount Vernon by horse and buggy. In addition to running Round Hill Farm, Walter also oversaw The Curtis Hotel while Henry was away during World War II. After Walter passed, Henry came home from the war with dreams to expand the dairy alongside Alice.

In 1948, the dream of expanding the family dairy farm, became a reality. Henry and Alice started to pasteurize and homogenize milk in their small dairy processing building.

On May 12, 2018 Round Hill Dairy was re-established by Tyler McCann and Johnny Curtis. Their mission was clear yet ambitious, “Ensure Mount Vernon, Ohio had a great place to enjoy a premium ice cream all while following in the footsteps of Henry and Alice Curtis!” Their mission soon became a reality and Round Hill Dairy is known as the best ice cream shop in Knox County.

Home of the Bittner, pictured below. That’s pretty much all you need to know and you can thank me later. Salty, sweet and savory, I literally crave a Bittner at least twice a quarter. Another spot we hit often when in the Canton area to see family and this stop might truly be my favorite. I’ve honestly never had any of their other ice cream or sundaes because I absolutely always get the Bittner. 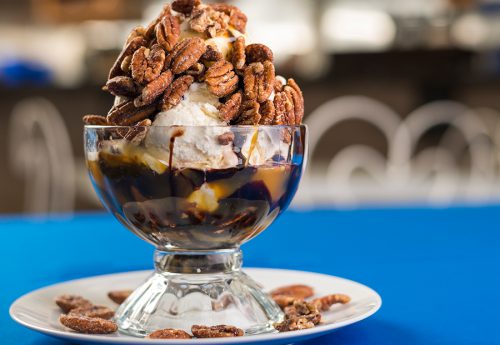 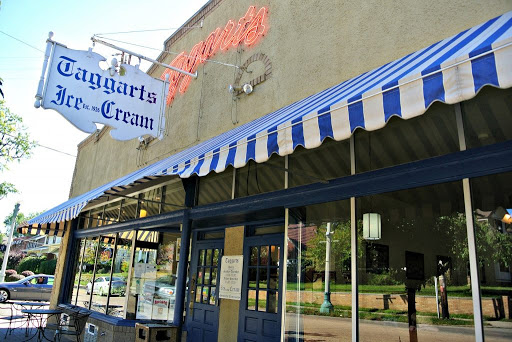 Established in 1926, Taggarts is a Canton landmark.

Walking into Taggarts Ice Cream Parlor & Restaurant is a step back into time. The original marble counter tops have withstood thousands of elbows and sundae dishes during their tenure here. The high-backed, maple booths and (now antique) soda fountain were brought in by Joe Taggart when he took over in the twenties. Another previous owner, Check Hess, brought in a 1940’s era player piano. The current owners, Ernie and Patti Schott are custodians of tradition; things do not change here because customers won’t hear of it!

Nostalgia is an important side dish but customers would not keep coming back if the trip down memory lane did not include something good to eat. Taggarts offers delicious made from scratch food, made by veteran staffers using time-tested recipes. However, ice cream is king here. If it can be scooped, dipped, mixed, or poured, Taggarts has it. By far, the most famous Taggarts legacy is the Bittner – invented in 1931 and named in honor of a delivery boy. This is a secret mixture of vanilla ice cream, chocolate sauce, and pecans from a special supplier in Georgia. The end result is a dessert which has the consistency of a milkshake but is too thick to drink.

Learn more about exploring Ohio and the