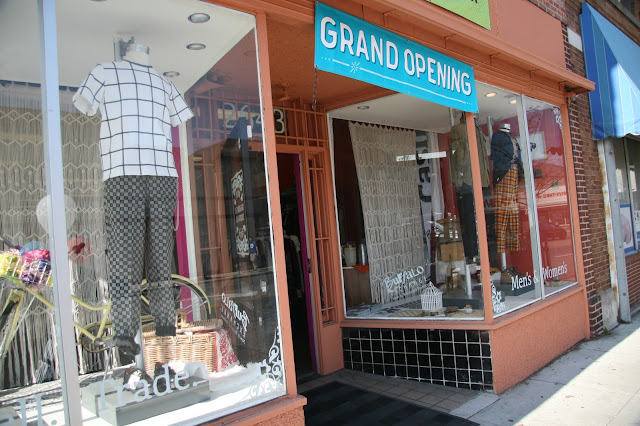 I started Saturday by hitting a grand opening I had been invited to on Campus. The second-hand store, Buffalo Exchange opened a new location and because I love a good deal, I had to check it out. 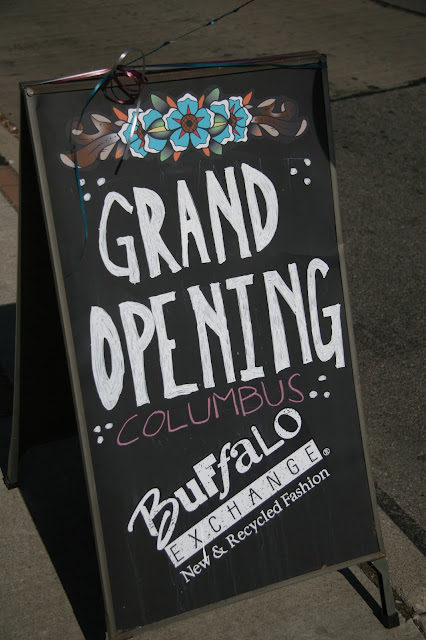 Manfriend, begrudgingly joined me at the opening, but later stated he thought they had a good selection of stuff he’d actually buy. He was unsure if he had the patience to go through the large racks though.
Typical guy. 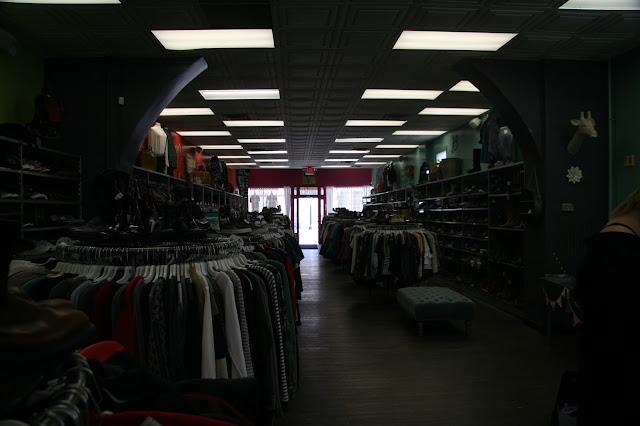 Buffalo Exchange was big, with a wide variety of everything. Good prices, probably a little pricier then a true second-hand store, but the stuff is really on trend and good quality.
They had a lot of great jewelry, bags, sunglasses and other contemporary accessories. 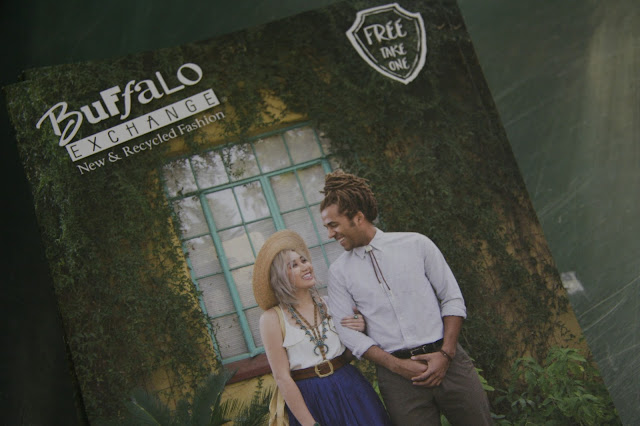 The staff was extremely pleasant and helpful. The overall vibe of the store was fresh and young and I would definitely return when I had more time to browse those large racks. 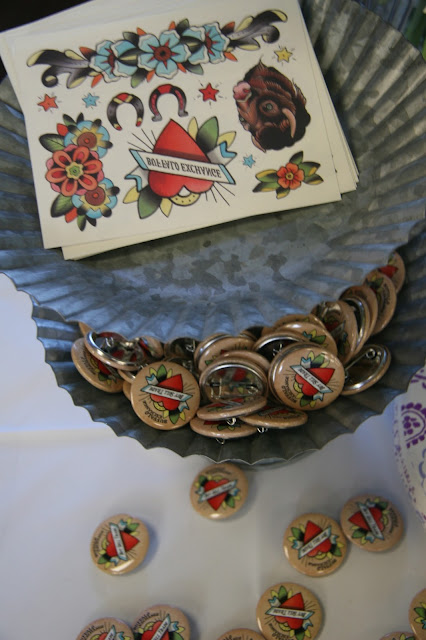 If you follow my Instagram stories you saw I purchased a {large} pair of gold, sunglasses and a basic, black choker. Both for less than $15 dollars and I received a $10 gift card since I am an Influencer, bargain! 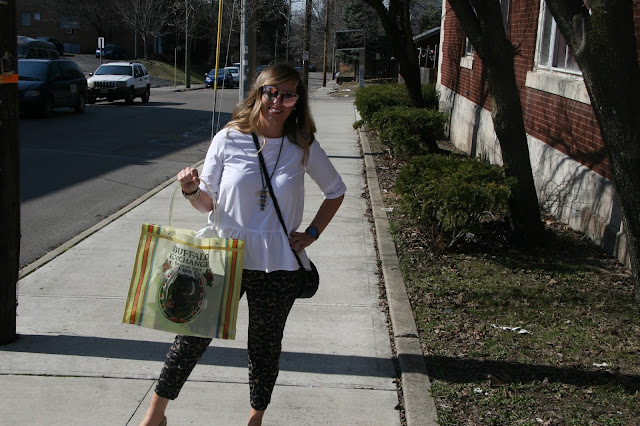 Me and all my goodies from Buffalo Exchange.
I actually love the funky bag they gifted as the swag bag. Still trying to decide if I can pull off the black choker or not. I tried it on and immediately started singing Alanis Morrissette. I’m obsessed with my gold shades though, solid $8 purchase.
The day was literally divine, so after Buffalo Exchange we continued on to the Short North. 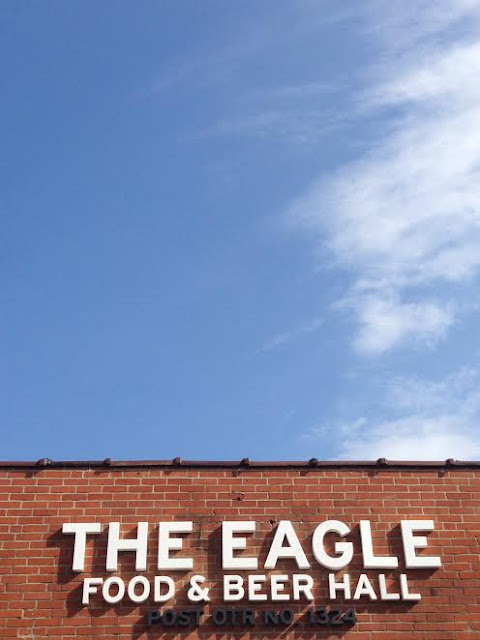 {Sidenote: It took us more than 30 minutes to go from Campus to the Short North. That construction is brutal! Get your act together Columbus!}
I was craving fried chicken and I wanted to introduce Manfriend to some of the best in Columbus, so we headed to The Eagle. It seems everyone else had the same exact ideas as we did. 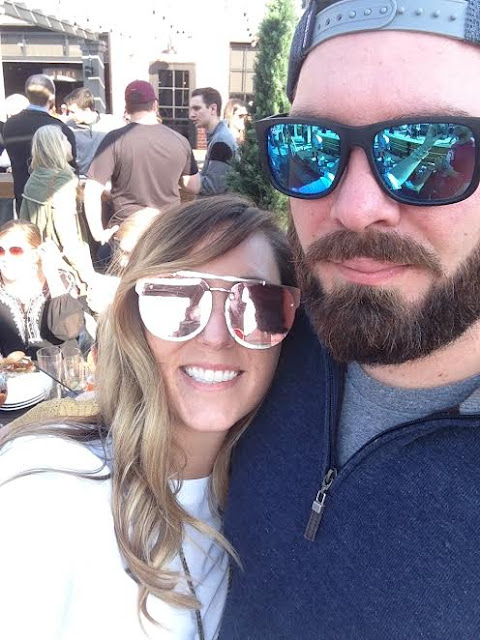 We waited over an hour for a table, once we were seated, service was somewhat spotty. It was 65 degrees on a February day in Ohio, so you can’t blame the hoards of peoples who came out to enjoy one of the biggest patios in Columbus. I could have sat in the sun all day, Manfriend’s patience however had about run out. 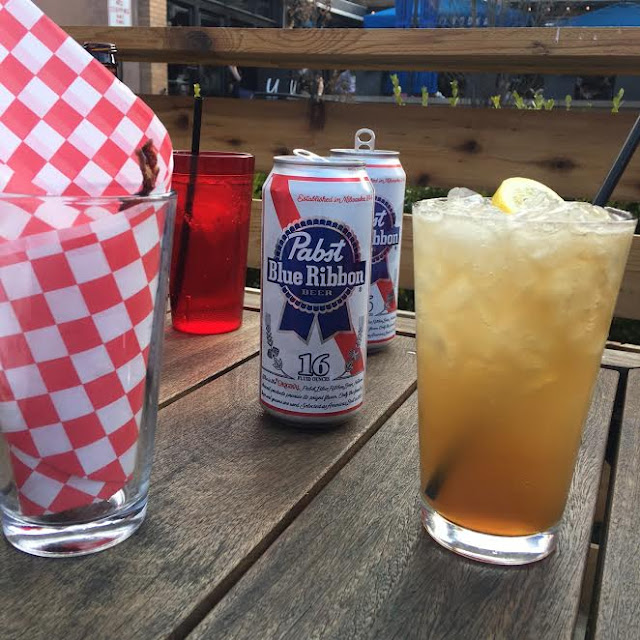 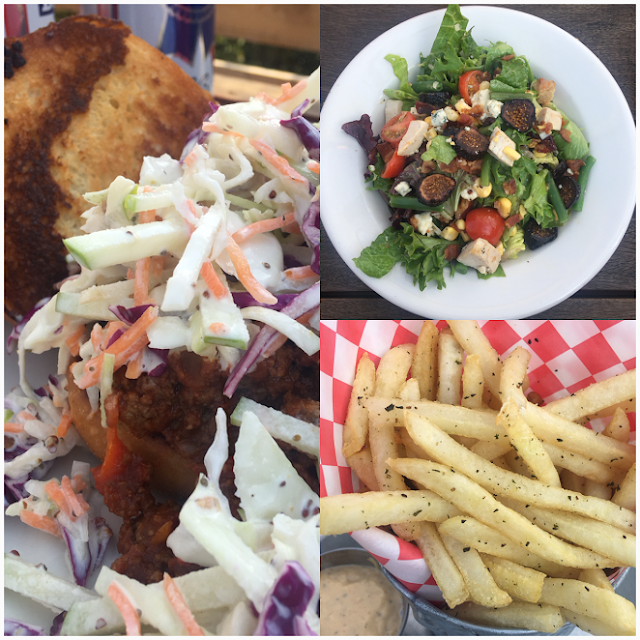 Fried chicken in the sun, in February, I really just can’t find anything to complain about, well except for the construction traffic and the wait, but really not much for me, HA! 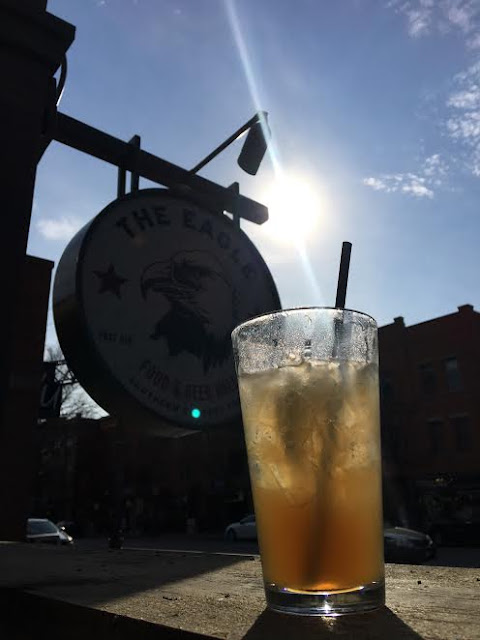 My favorite drink from The Eagle is their Eagle Ice Team aka Long Island Ice Tea.
A couple of those may have snuck up on me and it quickly turned into turnt up Saturday! 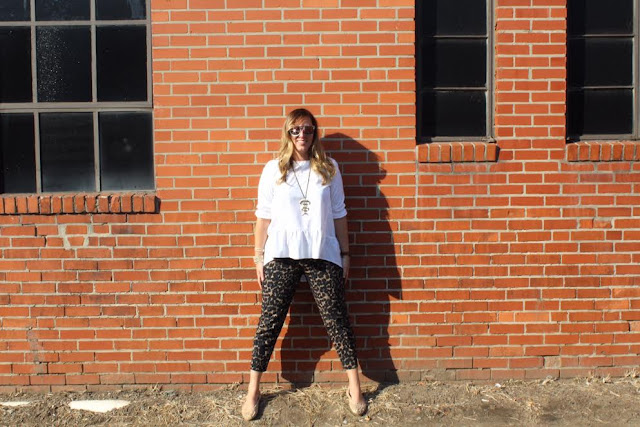 You can’t get together with your bestie blogger friend, both looking fabulous in 60+ degree weather and not take some outfit photos.
We snuck into an alley where nobody could really see us and took each other’s picture. Because it would be weirder if people could actually see us, right? 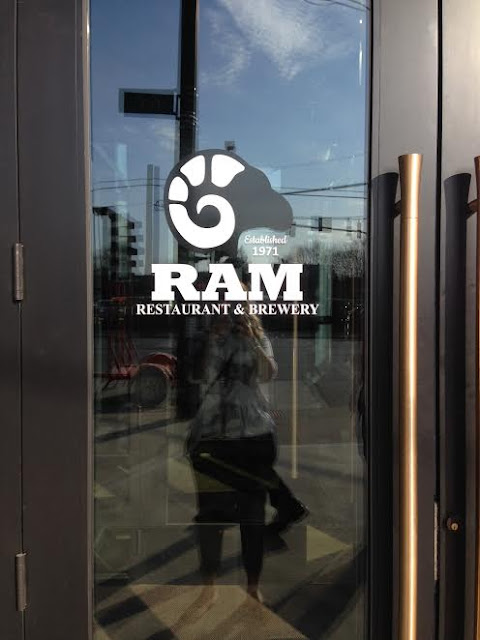 Next on our tour was the Ram Restaurant and Brewery. Another really cool space in Columbus putting out tasty beer. They have an awesome second floor patio that I foresee some beverages being sipped on.
I tried the blonde beer and Meg had the blue drank. I think my blonde was better than her blue! 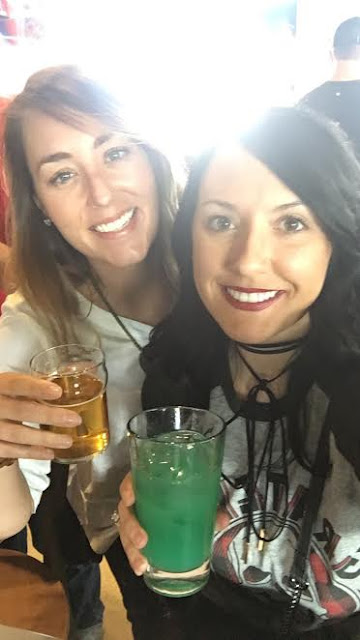 At that point on Saturday my phone died and I stopped carrying around my huge camera. Or all those Eagle Ice Teas caught up with me. We headed farther downtown and tried out Pins Mechanical Co. for the first time. It was also packed, again because all of Columbus was trying to get in their Vitamin C.
I was so excited to go to this bar and then I was really disappointed. It’s really cool, good concept, great patio space, but it is kind of just a cluster fuck. Plus I thought all the games, bowling, shuffle board and several others were all free. They’re not!
I was also kind of over the bar scene by that point and again, everything was sooo crowded I just couldn’t. So take my less than stellar review of Pins with an Eagle Ice Tea. 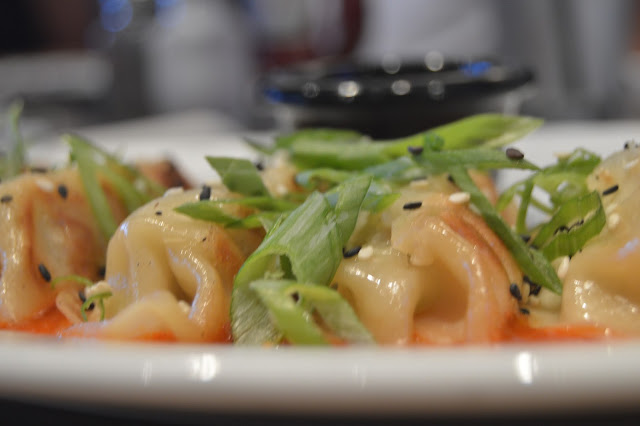 Today, because Evelyn did not have school due to President’s Day, I promised her a day of all her favorite’s. I contemplated the free Zoo day, mostly because of the unusually warm temperatures again. But am glad we opted out after I just saw the apology the Zoo issued because today was such a cluster.
Evelyn’s favorite restaurant is Rusty Bucket. I love that if she reads enough books she gets a free lunch and I also love their food as much as she does so it’s a win-win for everybody. After hitting up the library and a long, hard jaunt on the playground we dined like ladies of luxury. 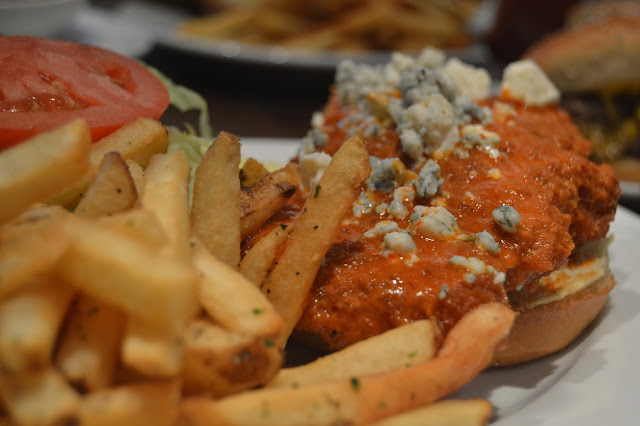 I had my usual, the buffalo chicken sandwich and it was especially delicious today.
Crunchy, the perfect amount of spicy buffalo sauce and slathered in melted, blue cheese. BOMB!
Then we shared dessert. Because it’s a holiday and you eat dessert on days you don’t have school. 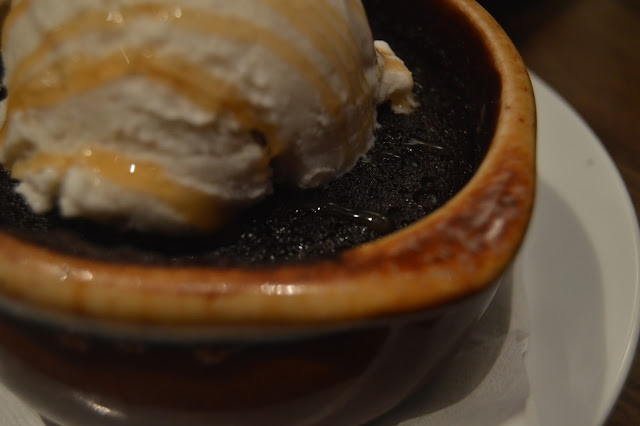 Tomorrow I will be announcing the WINNER of the Blink Box Collection GIVEAWAY!
Blink Box launches tomorrow at 9AM.
I will also be sharing a few more details and some of my favorite elements of Blink Box on the blog. Stay tuned for all the exciting details!