The big, Wernecke family trip to Hawaii and the first Wernecke Wedding is in less than a month and counting. Since I keep being reminded how many pictures are going to be taken of me, plus swimsuit (duh); I joined Life Time Fitness and am going every single day for the next 30 days, on the real, real. I am also trying to deprive myself of food as much as possible. Hungry goes so well in my world and beer I love beer…
Nobody likes a hungry Lindsey, trust me.
{Edit: It’s now 9:30PM and Manfriend just ordered a pizza and cheesy bread, so yeah, there’s that.}
As soon as I put myself on a “diet,” I become insatiably hungry. So I am going to keep sharing delicious food and beer pictures.
It just feels right. 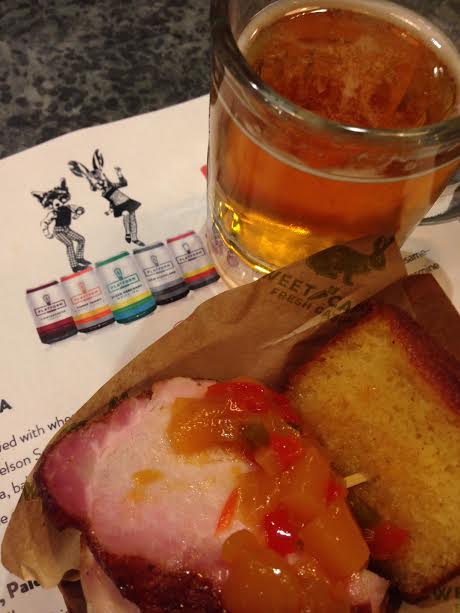 Yummy Yammy Beignet Bite   | |   Yammy Yammy
A sweet potato beignet served with a cinnamon sugar spiced smoked pork loin, topped with a jalapeno peach chutney. Paired with an ale that is brewed with hand roasted sweet potatoes with a touch of nutmeg, cinnamon and molasses. Complex malt character, balanced with a clean finish. Not too spicy, not too sweet.
That Yammy Yammy beer was so tasty. They saved that keg for that event specifically, word on the street was that it was one of the last few floating around. If you can get your hands on some of it from Platform Beer Co., it is worth a sip! 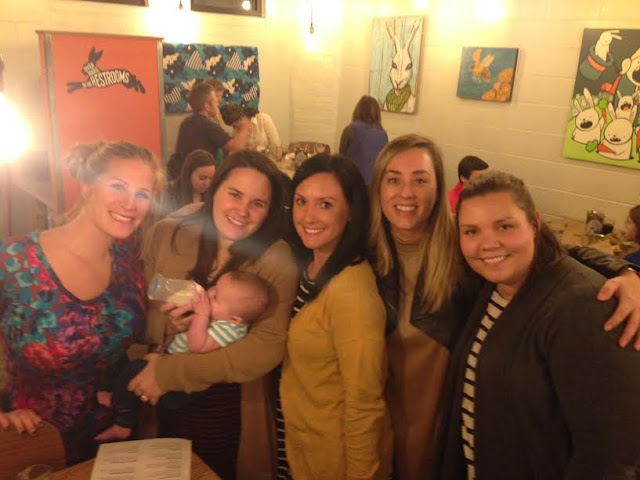 We hit up Sweet Carrot on the corner of Grandview and 5th Avenue, for a fun night of food and beer pairings featuring Platform Beer Co.
By we, I mean Manfriend and I, Megan and Stephen, Hannah plus Baby O and all the other gorgeous nanny gals I have been lucky to befriend. 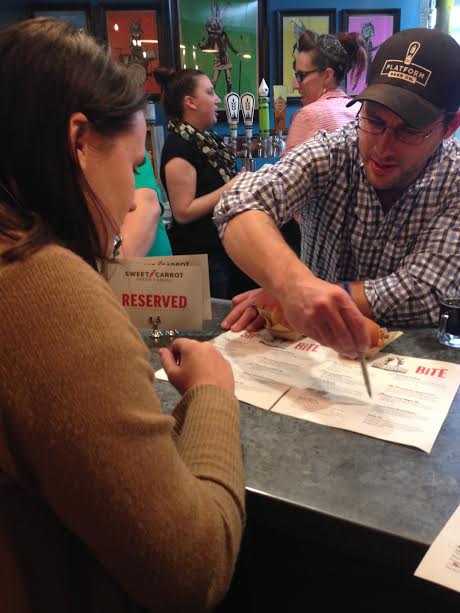 The staff of Sweet Carrot and Platform Beer Co. put together an awesome night. My only complaint was that the food they served is not available in store. Everything was so delicious I was making plans to come back and order all my favorites as I was eating. I’m a planner.
Sweet Carrot if you are reading this, I need the New Queso Crostini in my life, pronto! 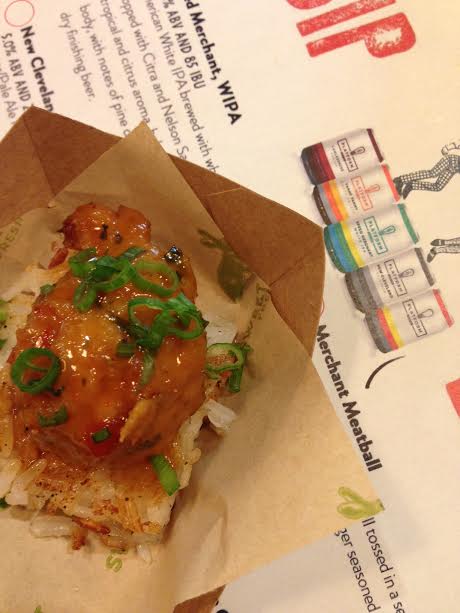 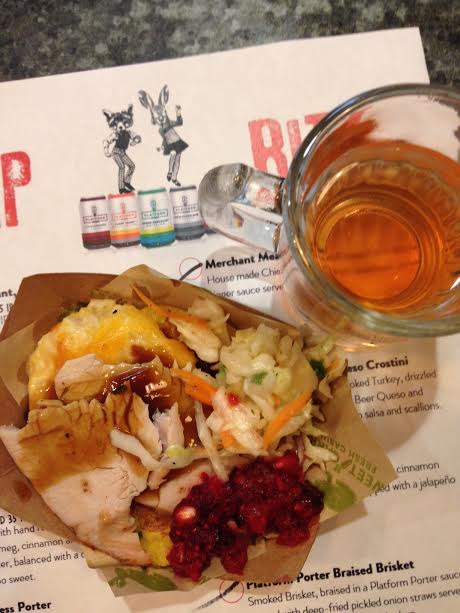 Turkey PJ’s  | |  Bunny Pajamas
A citrus cured smoked turkey served on a mini corncake with a cheesy potato casserole topped with our house slaw. turkey gravy and a cranberry-pomegranate relish. This was the big reveal, surprise beer of the night. If I ever find this beer, I will buy every can I can get my hands on. I have recently discovered the greatness that is sour beers. Bunny Pajamas is a Berliner Weisse sour, and was part of the 12-kettle series. It is a wheat beer brewed with cranberry and pomegranate. Pilsner malt and white wheat impact a nice full mouthful, with a semi-sweet and tart finish.
The combination of these two was like the most heavenly Thanksgiving dinner I have ever consumed.
That beer though, oh the beer! 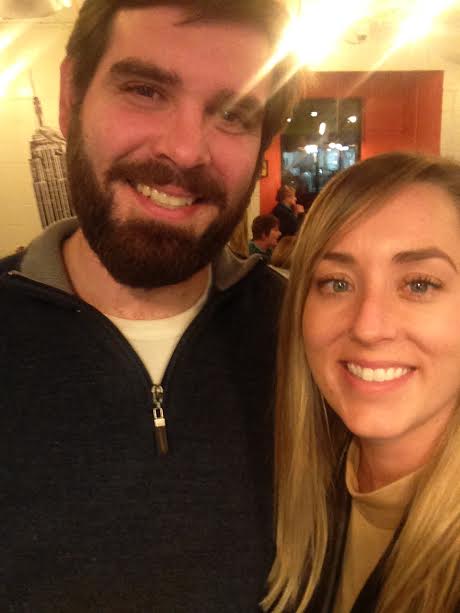 Forcing Manfriend to take pictures.
Katie, said I should procreate with him just for the eyelashes.
I totally concur. 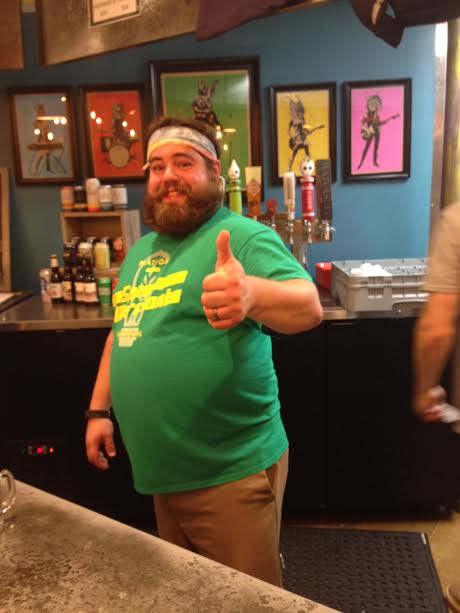 The Platform Beer rep that made our night even more fun. I wish I could remember his name, but I can’t. Megan and I actually randomly ran into him the next morning in downtown Powell as we were gallivanting about as bloggers do. 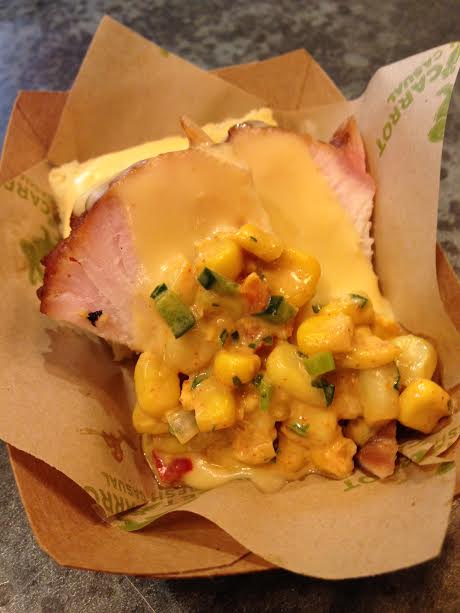 I am going to plead again, Sweet Carrot, please make this available. We are still talking about how special of a dish this was, it could win accolades, it won my heart and taste buds.
New Cleveland, New Queso Crostini  | |  New Cleveland, Palesner
House crostini topped with smoked turkey, drizzled with a New Cleveland Palesner Beer Queso and garnished with house made corn salsa and scallions. Paired with New Cleveland, Palesner a Pilsner, Pale Ale hybrid, Crisp German malts and German nobel hops lend to a well balanced, crisp, clean and refreshing light bodied beer.
You know it is a great time to be alive when you get to combine words like corn, queso and crostini. 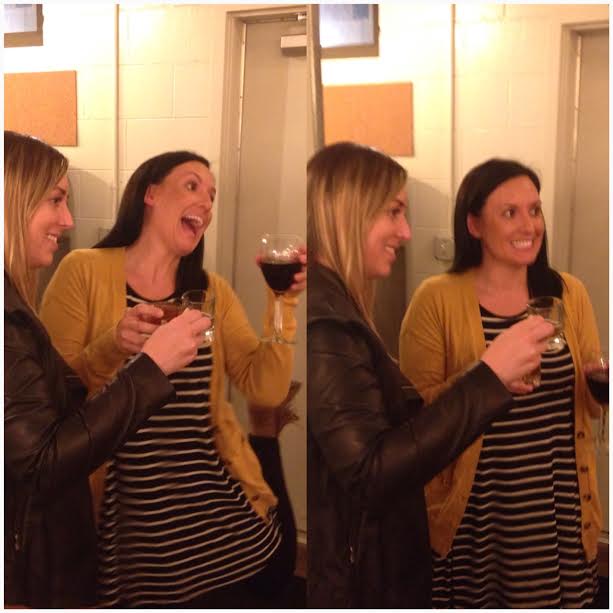 I had to include these pictures Manfriend snapped of us,
They make me laugh.
We were doing a boomerang. Which we have gotten pretty good at, but I guess it’s always good to know how ridiculous we look in public places.
Bloggers be Blogging.