I crammed a lot into this past weekend.

First, I haven’t been shy about becoming a Super Model and Friday I finally put my walking skills to the test. I’d say there was a lot of super and a lot less model involved in my big debut.

Anthropologie was a fabulous host and made the whole event so much fun to be a part of. 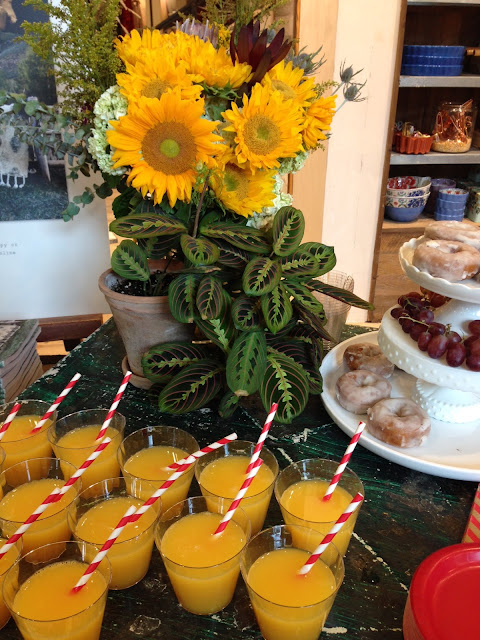 This was the first time Anthropologie has hosted a Fall Fashion Show like this in Columbus and hopefully it will become an annual event. 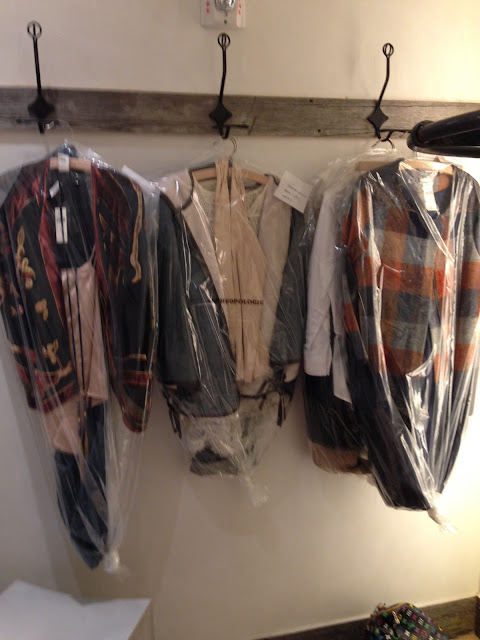 All four of my looks ready to go, I ended up only wearing three in the final show. 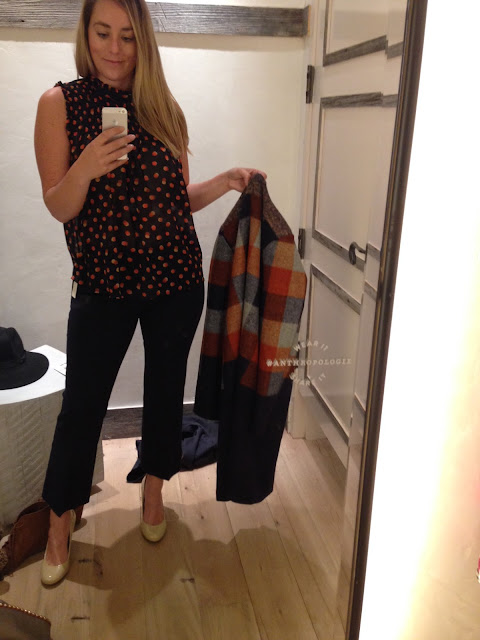 Feeling fancy trying on all the amazing clothes. This outfit was my favorite. The pants, AHHMAZE and that jacket. I lust so hard. 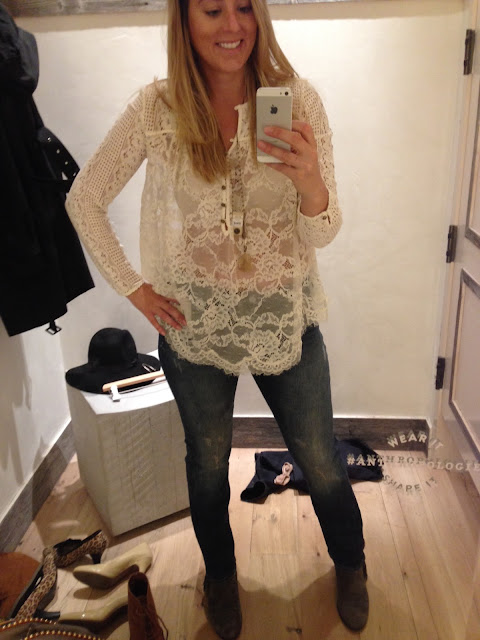 I’ve actually never owned a pair of Anthropologie jeans, despite reading rave reviews. I now know why everyone swears by them. Every pair I tried on fit me like a glove and were so flattering on my Mom-Bod. 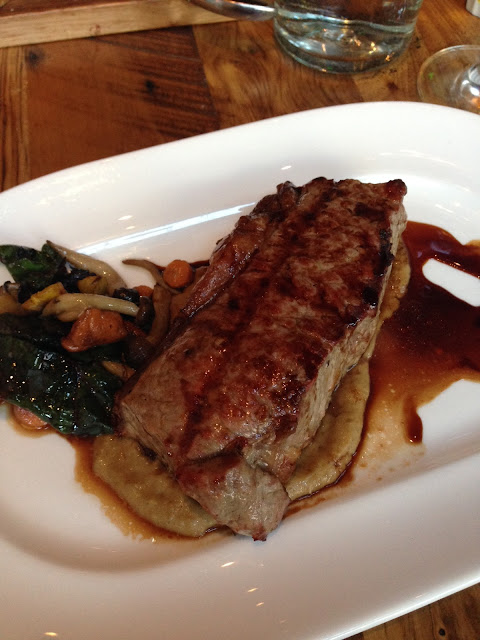 The day of the Fashion Show I did what every Super Model does before a show, I stuffed my face with a huge steak and guzzled champagne at The Guild House. Super Models eat things that look like this, right?
Remember when I said there was a lot of Super and a lot less Model. Well they super sized my steak and it was so good. How un-model of me! 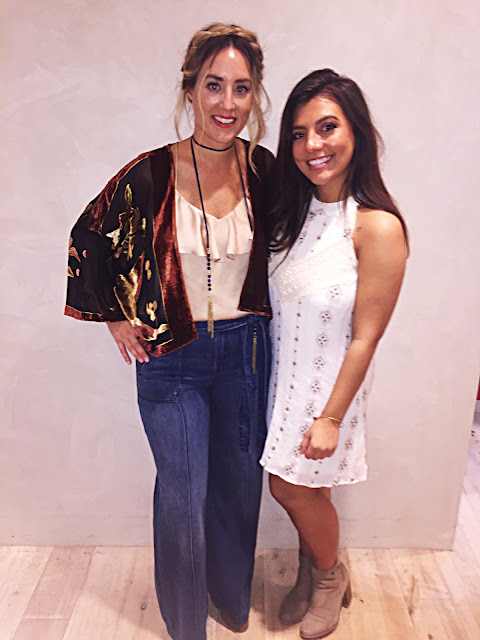 One of the best parts of Friday’s Fashion Show was getting to meet Mel from Outfit Crush in real life! She is just as cute in person as all of their amazing and stylish Instagram pictures. Definitely check these Fashionista’s out. 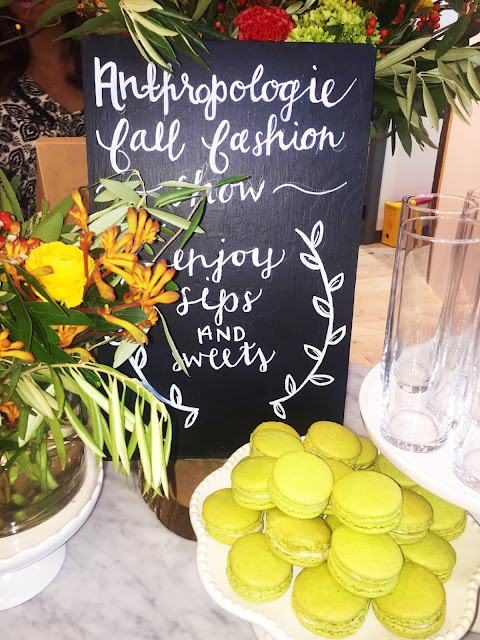 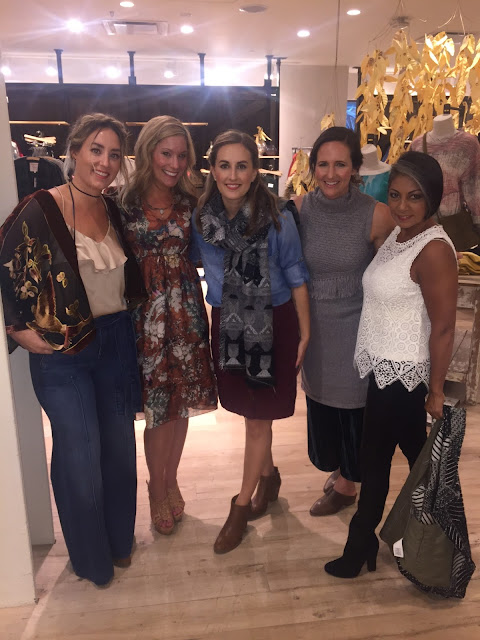 All my fellow Yogis from CorePower Yoga Short North.
That’s actually how I got involved and was asked to be a part of the Fall Fashion Show. Anthropologie extended an invitation to all the girls who work for CPY, so there’s the big secret. 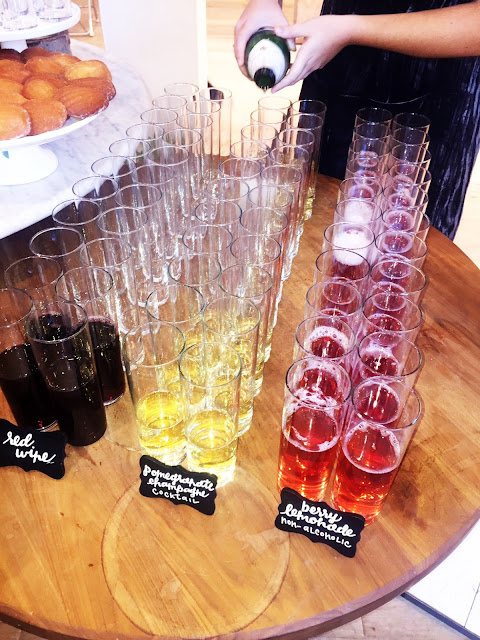 My Manfriend came to support his Super Model Girlfriend, he’s simply the best there is! He whistled every time I strutted my stuff and I can’t tell you how hot I felt. Work it Guuuurl! 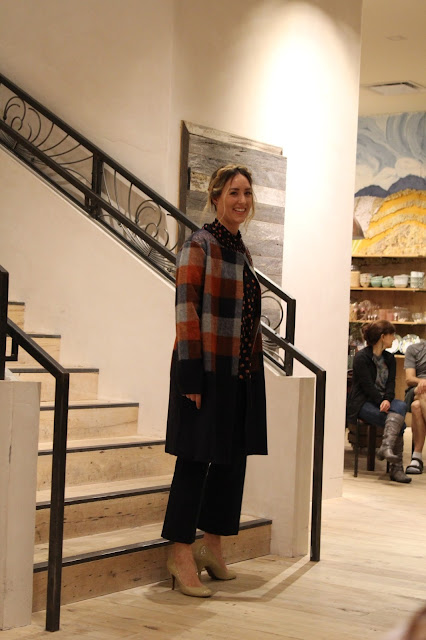 I later discovered he had indulged in a champagne cocktail and several red wines, so unlike him. Which also explained the out of character whistling.
Just when I was feeling so super. 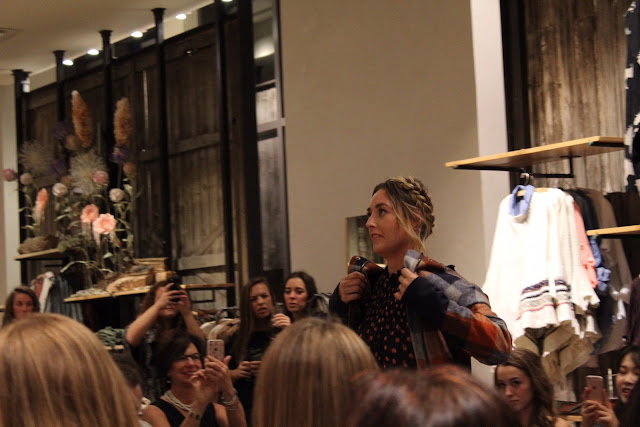 This is my favorite picture because you can see my Mom snapping pictures like she birthed Gisele.
My Mom, Nanoo, Nanoo’s Fiance, Manfriend and Megan and Stephen all showed up to support, which seriously meant a lot to me. 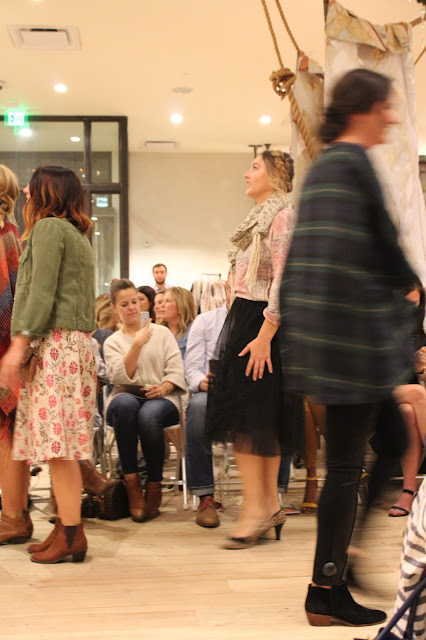 Hahahahaha…. I just have to laugh. So funny. 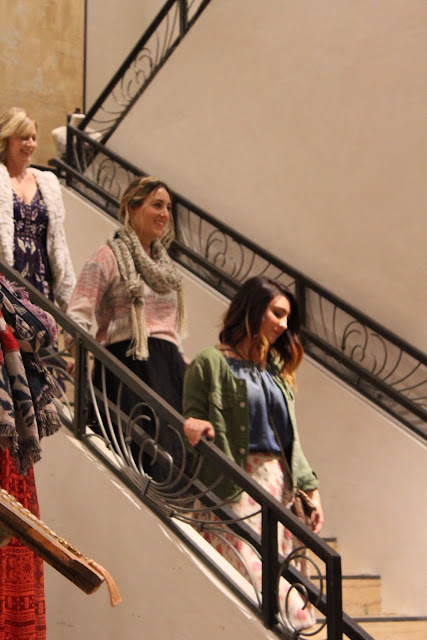 The whole experience was so fun and I’d do it again in a second. It was such a great time getting hair and makeup professionally done, meeting all of the girls in the show and getting outside of my comfort zone a little bit.
If you would like to book me for your fashion shows, get in touch with my agent. 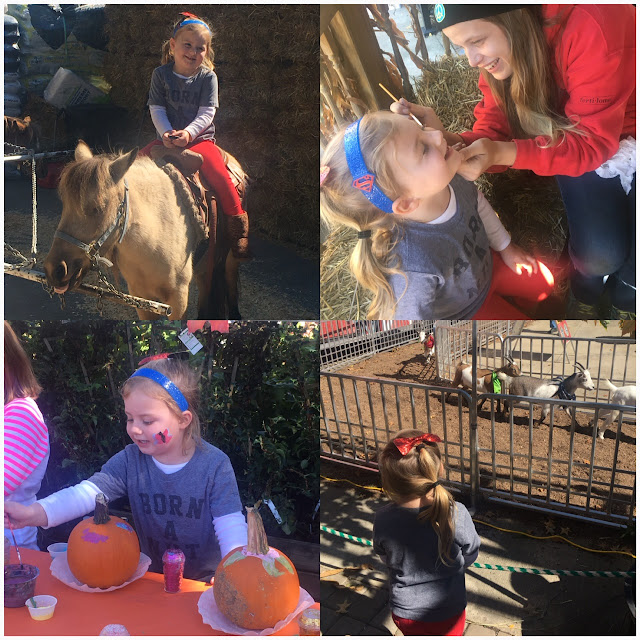 Evelyn had about as good of a Saturday as it gets for a three-year-old.

Oakland Nursery hosted their 36th annual Fall Fest of Values that included all kinds of fun Fall activities for kids. The event was FREE with a few of the activities being fifty cents!

Evelyn has been slightly confused about what Holiday is coming up and has been running around telling everyone, “Guess what? It’s almost EASTER!” 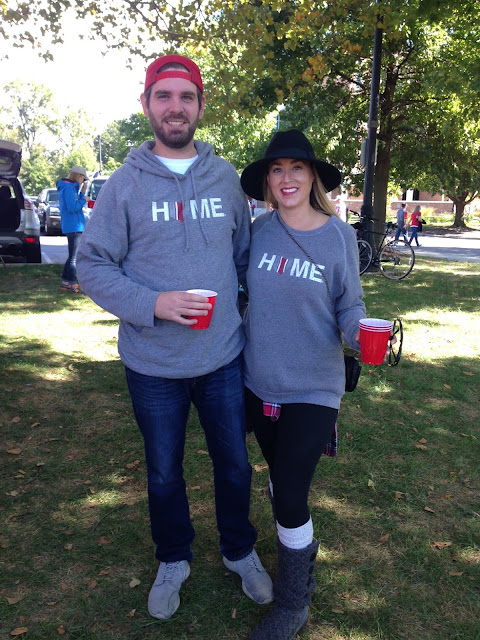 While Evelyn enjoyed all things Fall, we enjoyed cheering on the Buckeyes. 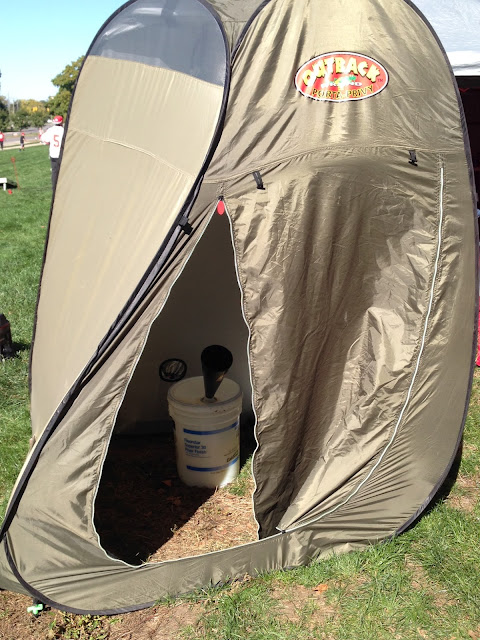 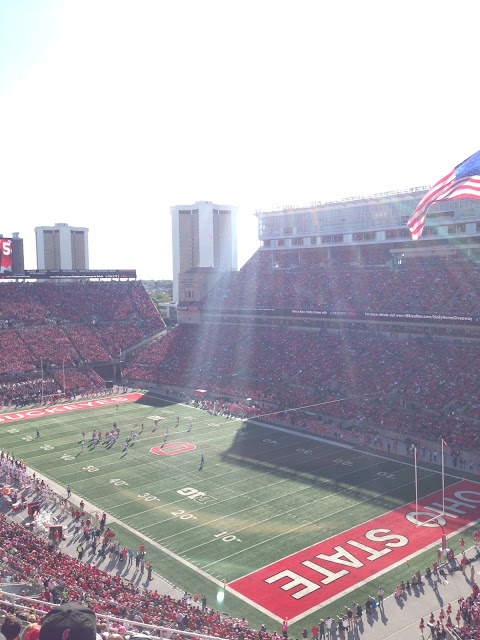 Mecca.
Buckeyes brought home a win, despite playing to the Indiana Hoosier’s level. I was not impressed and deemed their entire performance more than “basic.” 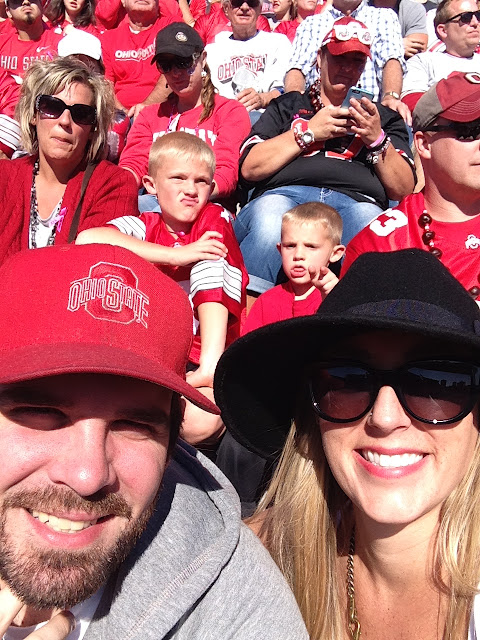 Gotta love snapping a selfie of yourself and all the unsuspecting people behind you.
I rounded out the weekend with Fantasy Football.

I of course brought home the WIN, even though I was projected to lose all week. 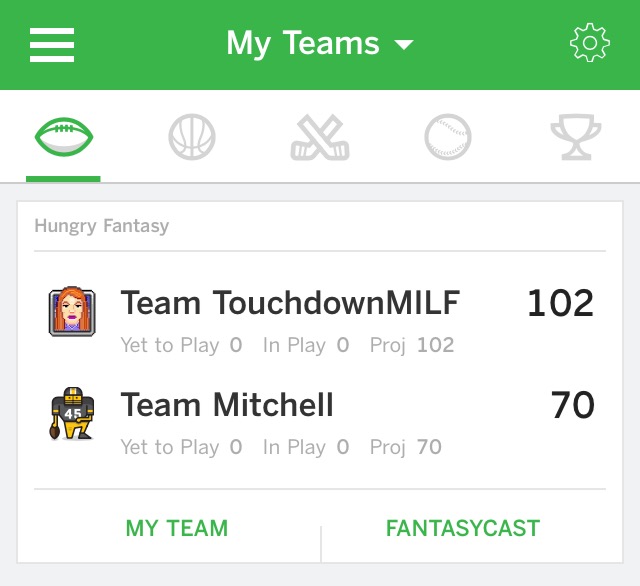 If you haven’t entered the GIVEAWAY from BlowDry Cafe on Instagram, better get on that as well!